Each year, around the olive harvest – one of the most important periods in the occupied Palestinian territories – human rights and non-governmental organizations (NGOs) report a peak in violence against farmers and harm to their crops. The number of attacks is allegedly dropping, but some observers suggest the scale of violence is increasing amid a system of impunity. This impunity has the potential to damage the Palestinian economy and increase radicalism among Israeli settlers.

Olives, a huge part of the West Bank economy, come under the spotlight almost annually. As the olive harvest comes around in the last few months of the year, equally predictably, a spike in illegal incidents against Palestinian farmers also occurs. According to Israeli NGOs, 2019 was no different.

About 45 per cent of land in the occupied Palestinian territories is planted with 12 million olive trees, mostly in the West Bank. These crops are essential for the olive oil industry, which makes up 25 per cent of the territories’ gross national income and supports around 100,000 families.

Israeli NGO B’Tselem documented a number of incidents against Palestinian farmers and/or their land during September, October and November. These included theft, vandalism, threats, hold-ups and violent attacks around Ramallah, Nablus, Tulkarm, Qalqilya and Salfit.

· 11 cases of assault by Israeli settlers, including physical attacks, stone throwing and driving farmers off their land;

· 9 cases where settlers stole olives from more than 650 trees and vandalized more than 450 trees;

· 3 cases where farming equipment was damaged.

It also noted that soldiers, even during the harvest season, blocked gates in the separation barrier so Palestinians could not access their farmland, as well as extensive beatings and firing of teargas/stun grenades at farmers.

“During the olive harvest season there is always an uptick in state-backed settler violence,” B’Tselem’s Amit Gilutz told Fanack, adding, “This is because during this time and during this time only, Palestinians are allowed access to lands they are otherwise prevented from accessing throughout the rest of the year.”

Most of the year, two thirds of the gates in the security barrier are closed and only open during the harvest. This restriction in access, warns the United Nations Office for the Coordination of Humanitarian Affairs (OCHA), means that farmers cannot maintain their groves, resulting in a loss of productivity.

OCHA says that on the eve of the harvest, Israel rejects 40 per cent of applications for visitor permits.

Incidents of settler violence occur all year round, including against farmers. During the harvest, the Israeli District Coordination Office provides special security to farmers to protect them from settler violence.

B’Tselem points out that the assumption of settler violence by Israel’s establishment is problematic, as it acknowledges settler violence will occur at any other time of year without taking measures to stop it, such as reallocating resources that restrict Palestinian farmers’ access to land towards year-round protection mechanisms.

In 2019, security was provided two weeks after the harvest began, to avoid conflicting with the Jewish holidays. By this time, settlers had already stolen some of the crops. In any case, security is scant, according to B’Tselem.

The Israeli Defence Ministry claims that hate crimes during this time actually dropped when compared to 2018. No comprehensive data on settler violence is available to corroborate this claim, but Gilutz notes that much of the violence seems to originate from around the settlement of Yitzhar.

During the first week of the harvest, when several incidents were reported in Palestinian media outlet WAFA, 30 masked armed settlers attacked farmers and several volunteers on 16 October. Two volunteers were injured, including 80-year-old Rabbi Moshe Yehuda from Rabbis for Human Rights.

Jewish and international volunteers regularly accompany harvesters as observers to try and deter violent attacks and stop Israeli forces turning a blind eye to illegal behaviour. The 16 October attack suggests this deterrence strategy did not work on the assailants, some of whom were from Yitzhar.

Tangentially, several days later, on 18 October, settlers also attacked Israeli troops in Yitzhar during Sukkot, a Jewish holiday. It was one of two attacks that took place within 48 hours of each other, sparking strong condemnation from the government.

“There will be no tolerance for lawbreakers who raise a hand to our soldiers,” said Prime Minister Benjamin Netanyahu after the incidents.

Yitzhar is an old military outpost near the city of Nablus that has transitioned to a civilian settlement and is home to the Od Yosef Chai (‘Joseph Still Lives’) yeshiva, a school that teaches a particularly radical ideology.

Od Yosef Chai’s spiritual figurehead is Yitzchak Ginsburgh, an American-born ultra-Orthodox rabbi whose followers are known to have carried out violent attacks against Palestinians over the last decade. According to historian Natascha Roth-Rowland, Ginsburgh’s teachings have given the settlement its radical reputation, including that the commandment of ‘Thou shalt not kill’ only applies to Jewish-on-Jewish violence and that non-Jews are subhuman, so killing them is permissible.

The government stopped funding the yeshiva in 2013, and in 2014 Israeli security forces were stationed at the school to close its operations. However, when the security forces left a year later, the school started operating again. The Samaria Regional Council now funds it.

Roth-Rowland argues that it is partly the social marginalization of hilltop youths residing in settlements and disassociation of the government that enables the violence to continue. She wrote in 972 Magazine, ‘the charade of well-worn condemnations that air in the wake of the more egregious acts of settler terrorism mask the extent to which the state enables such violence’.

Typically, settler attacks yield no convictions. According to Israeli NGO Yesh Din, of the 211 reported incidents of vandalized crops between 2005 and 2013, there were only four police indictments.

Olive groves that have experienced the most problems are those located near Israeli settlements between the separation barrier and the Green Line (the 1949 boundary between Israel and its Arab neighbours), as well as those along the perimeter fence around Gaza where military activity within 1.5 kilometres of it prevents thousands of families accessing their trees.

OCHA has stated on its website that Israel, as the occupying power, is obliged by international law to ensure protection for Palestinians and their property and ensure accountability where acts of violence do occur. It also flags the right to freedom of movement and the right to work and earn a living, which are impacted by acts that take place around the olive harvest season.

Over 800,000 Palestinian olive trees have been uprooted by Israeli authorities and settlers since 1967, according to research by the Applied Research Institute of Jerusalem. The figure comes from a 2011 report that estimates the average annual productivity of one olive tree to be about 70 kilograms and the value per kilogram to be around $1.103 per kilo.

According to this and other reports, Israel’s resources are misallocated between harvest season and the rest of the year. This is despite ongoing and unchecked settler violence, which the government itself has recognized as worrying and extreme in its scope. With more than $S55 million at stake each year, the price for Palestinians is high. 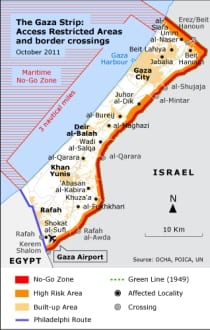