Palestine, represented by the Palestinian Liberation Organization (PLO), requested to be a signatory in 1989, but due to the equivocal status of Palestine as a state this was rejected. It finally was allowed to become signatory on April 2, 2014 when it also signed Additional Protocol I (Protection of Victims of International Armed Conflicts). On January 4, 2015 Palestine became signed Additional Protocols II and III (Protection of Victims of Non-International Armed Conflicts and Adoption of an Additional Distinctive Emblem respectively). Convention for the Rights of the Child (CRC) as well as the Optional Protocol to the CRC on 2 April 2014. Palestine has been member of the OIC since 1969.

The Convention relating to the Status of Refugees is based off Article 14 of the UDHR, and recognizes the right of asylum and protection of refugees. It was approved during the General Assembly meeting of December 14, 1950 and came into force on April 22, 1954. However, the original Convention limited its scope to refugees fleeing prior to 1 January 1951. As such, an additional protocol was compiled in 1967, removing these limitations.
Palestine is not party to the Convention, nor its Protocol.

The Convention on the Elimination of All Forms of Discrimination against Women – also called CEDAW, was approved during the General Assembly Session on 18 December, 1979 and entered into force on 3 September 1981. On April 2, 2014, Palestine – listed as State of Palestine in the signatory overview of the Convention – acceded to CEDAW on April 2, 2014 without any reservations. Through “accession” a state accepts the offer or the opportunity to become a party to a treaty, which has already negotiated and signed by other states. It has the same legal effect as ratification.Countries that have ratified or acceded CEDAW are legally bound to put its provisions into practice, and thereby agree to submit national reports on measures taken to comply with its obligations. Such reports are to be compiled at least every four years.

The Convention on the Rights of Persons with Disabilities was approved during the General Assembly session on December 13, 2006 and came into force on May 3, 2008. Simultaneously, the Optional Protocol was approved, giving the Committee on the Rights of Persons with Disabilities (CRPD) competence to examine individual complaints with regard to alleged violations by States parties to the Protocol. The CRPD is the body of independent experts that monitors implementation of the Convention. Palestine is not party to the Convention nor the Optional Protocol.

The International Convention on the Protection of the Rights of All Migrant Workers and Members of their Families was approved by the General Assembly on December 18, 1990 and entered into force on July 1, 2003. Palestine is not party to the Convention.

Palestine, referred to as the “State of Palestine”, acceded to the Convention on April 2, 2014 with no reservations.

Censorship
Censorship
Article 27.3 of the Palestinian Basic Law clearly states that 'Censorship on media shall be prohibited. No warning, suspension, confiscation, cancellation, or restrictions, shall be imposed on media except by law, and in accordanc... 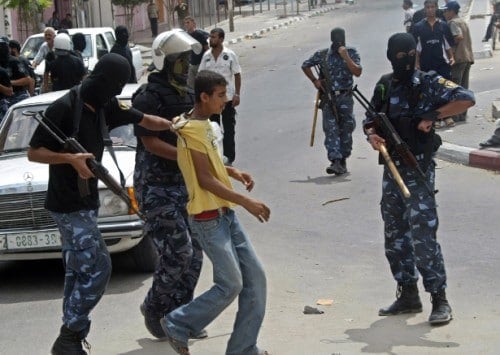