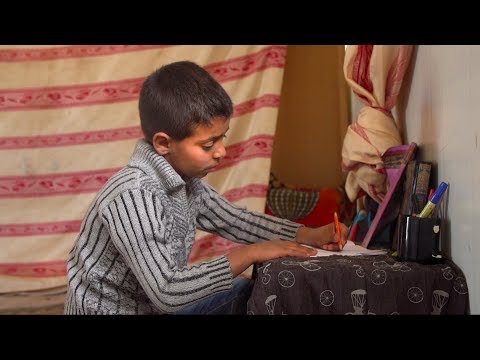 The video shows Ali, a schoolboy in the Bedouin village of al-Khan al-Ahmar, pointing at a hill in the desert between Jerusalem and Jericho, in the Israeli-occupied West Bank. “They will build the settlement there, instead of the school,” he says. “When the school has been demolished, it will be moved. They will move us. They won’t let us stay here.”

By ‘they’, Ali means the Israeli government, which has been planning the removal of Bedouins in the Jerusalem area for years. He continues: “They will build a settlement with olive trees and so on. They will use the land.”

The boy is an apt observer of what is happening to his people, the Bedouins of the Jahalin tribe. In the video, he talks about his dream of becoming an engineer. The video was produced by Jahalin Solidarity, a Palestinian non-profit that supports Bedouins and other Palestinians who are being targeted by the Israelis for transfer and forcible displacement.

The Bedouins of the West Bank are a semi-nomadic people who were forcibly displaced once before: in 1948, they had to leave the Negev desert in the nascent state of Israel. The Negev, which is still home to other Bedouin tribes who are also being threatened, is the area where these Bedouins are the indigenous people. However, Israel denies them any indigenous rights. In 2015, this was even ratified by Israel’s Supreme Court.

In the 2013 report The Indigenous World, published by the International Work Group for Indigenous Affairs, the opening sentence of the section on Palestine read: ‘The Bedouin living in the Occupied Palestinian Territory (OPT) are seeing their environment sliced off, paved, walled, fenced, dumped, polluted, overpumped, increasingly desiccated and degraded.’ This rather disturbing description was written by the British-Israeli activist Angela Godfrey-Goldstein, who has been fighting for the Bedouins for over 20 years.

Five years on, the situation has not improved, Godfrey-Goldstein told Fanack Chronicle. Look, for example, at Ali’s school, which is due to be replaced by an illegal Jewish settlement. Godfrey-Goldstein: “It’s really urgent now. Any day there could be a court ruling. Two of the three judges are religious Zionists. One is a settler, the other a former settler with a brother and a sister who both live in the neighbouring settlement of Kfar Adumim. Therefore, according to Israeli law, she should have recused herself. But she didn’t. The lawyer is pessimistic. The judges will rule for demolition. It’s what [Defence Minister Avigdor] Lieberman and [Prime Minister Benjamin] Netanyahu want. It will probably happen in June.”

The Jahalin are being threatened by the Israeli army, Godfrey-Goldstein said. “There was a huge convoy in the middle of the village. They were videoing the hill with a drone. And they carried big M16s into the village, around the children. They closed the village with cement blocks.” This has caused the villagers to speculate about the next step: Will it be a night demolition? Will the bulldozers enter the village from the highway?

Some of the Bedouin children will be forced to live in a semi-urban environment next to a garbage dump, without their animals, in what the American social anthropologist Dawn Chatty has dubbed ‘cultural genocide’. Godfrey-Goldstein: “There’s no way they can maintain their traditional lifestyle over there. The Bedouins can’t graze their animals. So they are less sustainable. Their children are being urbanized. In essence, they won’t be Bedouins anymore. All the herbal knowledge is vanishing, the ability to track. They’re no longer out there. Dawn Chatty has said this is the worst case of forcible displacement she has witnessed in 30 years.”

According to Chatty, this forcible displacement may constitute a war crime. The Swedish development organization Diakonia wrote a legal analysis of Israeli policies of forcible transfer, in which it explored whether the displacement qualifies as a crime against humanity. The forcible transfer of Palestinian communities in the West Bank is both ‘widespread’ and ‘systematic’, according to the report. ‘If criminal intent and constitutive elements of the crime are proven …, the criteria for the International Criminal Court’s determination that crimes against humanity have been committed may be satisfied.’

Godfrey-Goldstein has been active in resisting Israeli policies for decades, but her efforts have been largely “ineffective”, she admits. “So we have to up the ante. We have to have more initiatives like that of 47 British MPs, who have called for diplomatic, political and economic pressure on Israel.”

The Jahalin have been living in al-Khan al-Ahmar since the early 1950s, after they were forcibly displaced from the Negev. The land they now live on belongs to Palestinians from the neigbouring town of Anata, who let the Bedouins use it. To Israel, this area is known as ‘E1’: the largest area in the West Bank that has been earmarked for the expansion of illegal settlements.

The Bedouins are the victims of a political game, said Godfrey-Goldstein.

“When Palestine became an observer state at the UN in 2012, Israel said: we will develop E1 as a revenge. My take is that E1 plays a pivotal role in splitting the West Bank. If E1 is developed as a Jewish settlement, the whole area east of Jerusalem, all the way to Jordan, will be Jewish. The Bedouins are simply in the wrong place.”

In a statement, a spokeswoman for the Civil Administration, the Israeli governing body that operates in the occupied West Bank, said that Israel decided the Bedouins of al-Khan al-Ahmar cannot stay where they are because it is “not their land”. Despite evidence of Palestinian landownership, Israel considers the area to be ‘state land’. This is a term that Israel uses for land that supposedly was not registered during Ottoman and British rule.

The spokeswoman continued: “But the case is still in court. We will wait [to hear] what the judge has to say.” Israel offered the Bedouins a new place to live, she said. “The judge asked the Bedouins to come up with an alternative place to live, if they don’t like our offer. But they didn’t. If they move to the place we offered them, they will finally have water and electricity. Moreover, we said we will build them a public school. But the most important issue is that at the moment, they live on land that doesn’t belong to them.”

According to Godfrey-Goldstein, she has been saying since 2005 that “if you favour two states, you should worry.
Now we’re beyond worrying. The Palestinian leader Yasser Arafat already said the Bedouins are the gatekeepers of Jerusalem. All the proposed alternatives to the village of al-Khan al-Ahmar still add up to forcible displacement. If it were up to Netanyahu, all Bedouins would relocate to Abu Dis or Jericho. That’s what’s happening now: the Bedouins are being ‘civilized’ and their culture is disappearing in the process. In 30 years from now, no one will know how to live in a desert anymore.”