The latest breakdown in the peace talks between Israel and Palestine has been blamed almost unanimously on the Israelis, even by Israel’s strongest ally, the United States. Unlike on previous occasions, the Palestinians appear to have played their cards well. The failure of Israel to deliver on its agreement to release the final twenty-six of 104 long-term Palestinian prisoners—despite the American guarantee that they would be released—helped Mahmoud Abbas get rid of the straitjacket that he had placed himself in. A few days after Israel failed to honor the deadline for the release of the prisoners who had been jailed since before the start of the peace process in 1993, the Palestinians signed fifteen international treaties. Release of these prisoners had been promised in 1999 as a confidence-building gesture, as part of the Sharm El Sheikh agreement, but the start of the second Palestinian intifada gave the Israelis the excuse not to release them at that time.

While the release of the prisoners was part of a deal with Palestinians (including the PLO) to refrain from joining any UN agency, the Palestinian president didn’t go as far as he could have. Palestine, since November 2012 a non-member state of the UN, can join more than sixty international agencies, including the International Criminal Court (ICC). Israel has vehemently opposed Palestine’s membership in the ICC because of the possibility that Palestine might demand that Israel’s leaders be tried as war criminals.

The Ramallah-based PLO leadership did not join the ICC at this time, but they did reach a reconciliation agreement with their former archrivals, the Islamist Hamas movement. The agreement, which appears to be a total capitulation by Hamas to the PLO and its insistence on a negotiated track to solve the Palestinian problem, gave the Israelis the excuse to get out of the peace talks, in which they really had no interest. The official Israeli response, as articulated by Prime Minister Netanyahu, was that Palestinian president Mahmoud Abbas had to choose between a pact with Hamas and peace with Israel.

Abbas responded, during a session of the Palestine Central Council, by welcoming the reconciliation agreement, reiterating his commitment to the peace talks, and insisting that the unity government that is stipulated in the reconciliation “road map” will continue to recognize Israel, respect signed agreements, and renounce terror. These were the three conditions laid out by the now nearly defunct quartet (UN, US, EU, and Russia) to the newly elected pro-Hamas government in 2007. By accepting these conditions, Abbas signaled to Israel, the United States, and the rest of the world that they should neither fear nor be opposed to reconciliation with Hamas.

While the United States felt that the reconciliation was “unhelpful”, in the words of President Obama, the European Union, the United Nations, and Russia welcomed it warmly, as well as the fact that Abbas, who emerged the winner, has insisted that talks continue and that Palestine’s recognition of Israel not be rescinded. 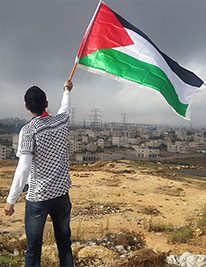 Palestinians inside and outside the occupied territories welcomed Palestinian membership in the international organizations and the reconciliation between Hamas and the PLO. The 15 May anniversary of the dispersal of Palestinians in 1948 was remembered in 2014 in a much more unified and boisterous way than in years past.

But, despite the apparent success of Mahmoud Abbas in avoiding any major roadblocks in the negotiations and the reconciliation efforts, Palestine remains under occupation, and Israel’s settlement drive has not been halted. Israel’s right-wing housing minister made this clear when he announced the acceleration of Jewish settlement activities, adding that he expected 50% more settlers in the occupied territories within the next five years.

It is unclear what direction the Palestinian effort will take after the breakdown of the talks. While there is no doubt that Palestinians could not accept Israel’s position without response and that Palestinian unity is the top priority, there is a feeling that there is no clear strategy ahead. How will Palestinian leaders achieve the demands of their people for freedom and independence? Despite its many drawbacks, Washington is clearly committed to peace in the Middle East, although it is unwilling to confront the Israelis. Can Palestinian leaders forge a strategy that will produce real results in the future? Will the European connections be much more necessary in the coming stage? Will Palestinians accelerate peaceful, nonviolent resistance inside the occupied territories? Will Abbas adopt the Boycott, Divestment, and Sanctions (BDS) path, or will he try to stay neutral on that subject, in the hope that an American-led process can be revived with the settler-influenced Israeli government now in power?

If the current reconciliation process goes as planned—which is not at all certain—Palestine is scheduled to hold elections by the end of 2014. Mahmoud Abbas has repeatedly stated that he will not run for president again. While the negotiations are held in his position as chairman of the PLO, elections will no doubt bring new blood and fresh ideas. The remaining months of 2014 might be Abbas’s last chance to make a positive impact for peace in the region, and Obama’s term as US president is in its last year and a half. It is unclear whether we will see any new ideas from Abbas or will have to wait for new, younger leaders to carry the torch.