Demonstrations in Ramallah and Gaza – Message to Palestinian Leadership

The demonstrations that began in Ramallah on 10 June 2018 with approximately 1,500 demonstrators continued for several days. However, the demonstrators were later reduced to only a few hundreds, after an adviser to the Palestinian President Mahmoud Abbas issued a decision banning the organization of popular events or marches during holidays. This gave an excuse for the Palestinian Police to quell the protests by force on 13 June.

The demonstrations were planned and prepared via social media. A campaign called “Mobilization Against Sanctions” was launched and led by a group of personalities including leftists, civil society organizations, activists, academics and journalists.

The opposition, which is trying to restore its role to tip the balance between the Palestinian political poles Fatah and Hamas, continues to mobilize powers and stage peaceful protests to apply pressure on the government. Although the number of participants in the demonstration was not high, amounting to a few hundred protesters only, they were able to rally a strong movement within the Palestinian community as a whole. They shouted slogans and raised banners demanding that Palestinian President Mahmoud Abbas lift the sanctions imposed on the Gaza Strip since March 2017.

Indeed, these sanctions have started to decrease the salaries of government employees of the Palestinian Authority by 30%, while deductions to basic salaries amounted to 50%. Because of the sanctions, and in addition to a substantial reduction in the government’s current spending on various ministries, thousands of military and civilian personnel were forced to retire early. Moreover, for several months Israel made the decision to reduce the average electricity consumption in the Gaza Strip to less than four hours a day.

All this has exacerbated the humanitarian crisis in the Gaza Strip and made poverty rates rise to unprecedented levels.

The demonstrations were quelled by the Palestinian police by force, using batons and tear gas. A large number of demonstrators were reported beaten, including journalists and activists from the civil society. Approximately 60 demonstrators were also beaten, including a large number of journalists, some foreign. They were arrested and their cameras confiscated because they were documenting the protests. The foreign journalists who had been arrested were released overnight. The Palestinian press association condemned the barbaric treatment the demonstrators received and demanded that all journalists do not cover government news for three days. 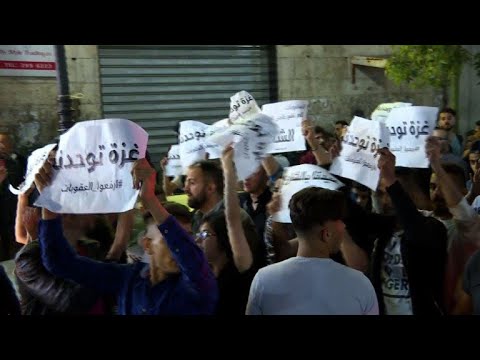 Since Hamas took power in the Gaza Strip in June 2007, a growing political and societal divide has developed between the West Bank, which is controlled by Fatah, and the Hamas-ruled Gaza Strip. Many reconciliation agreements have been reached reached between the two sides, but they never last long.

The latest was signed in Cairo in October 2017 after Hamas dissolved its administrative committee, the Gaza-based government, . The deal established that the government of national unity, headed by the Palestinian politician Rami Hamdallah, should run the government affairs and all employees in the West Bank and the Gaza Strip. However, the political divide between Hamas and Fatah has not yet been resolved, and it may have deepened too.

For its part, the Palestinian Authority continued to tighten sanctions and to impose new ones on the Gaza Strip, despite the recent agreement to recognise the situation in Gaza as a humanitarian crisis. By doing so, it hopes to force the people to demonstrate against Hamas and overthrow it.

On the other hand, Hamas realized that the term “empowerment” advocated by the Hamdallah government was a way to humiliate Hamas. The leadership of Hamas has refused to give up the weapons because they had bad experience with the Palestinian Authorities (PA). From 1996 until 2005, a lot of Hamas’ leadership and supporters were in PA Jail for months, sometimes for years.

Therefore, in order to avoid another bad experience, Hamas kept vital sectors in the Gaza Strip under its control. That includes the sectors of security and tax collection, but excludes Ramallah’s main crossings. The crossings are the Erez-Beit Hanun crossing with the Israeli side, and the Rafah crossing with the Egyptian border, both of which have been handed over to the Palestinian Authority under the leadership of the Ramallah-based Ministry of Interior. However, Hamas has set up check points outside Erez and Rafah border and quasi controls the crossings from abroad. Therefore, it can control the movement of passengers who get out or come in the Gaza Strip.

The complete collapse of the Palestinian economy in the Gaza Strip has had many factors: the siege imposed by Israel and Egypt on the Gaza Strip for more than 11 years, the three destructive Israeli wars in the recent years, the closure of the Rafah crossing for many years, and the sanctions imposed by the Palestinian President on the Gaza Strip.. Nearly 70% of the population of the Gaza Strip have become dependent on the aid provided by the United Nations Relief and Works Agency for Palestine Refugees in the Near East (UNRWA). And things are getting worse: the UNRWA recently suffered a major financial deficit after the United States froze half of its budget allocated for funding the UNRWA, in January 2018.

According to the United Nations Office for the Coordination of Humanitarian Affairs (UNOCHA), poverty rates in the Gaza Strip rose from 38.8% in 2011 to 53% by the end of 2017. Over half of the Palestinians in the Gaza Strip live without sufficient food and water. Food insecurity, lack of healthcare, and the severe shortage of electricity have made life unbearable in the Gaza Strip.

Protesters in Ramallah, despite their limited number, expressed solidarity with the besieged Gaza Strip and dissatisfaction with the policy adopted by the Palestinian leadership toward their own people. While the Palestinian Authority remained silent about the demonstrations in Ramallah, both Fatah and Hamas rushed to blame one another for the tension that has become prevalent in the Palestinian street.

In an official statement, Fatah said that the demonstrations in Ramallah aimed to incite sedition. They added that Fatah will strike with an iron fist if the protests harm the legitimate leadership. The statement also said that the demonstrators, described as “mercenaries,” should have raised slogans to force Hamas to abandon power and empower Hamdallah’s government in the Gaza Strip to end the Palestinian divide.

Hamas spokesman Hazem Qasim strongly condemned the attack against the demonstrators. He said that the Palestinian Authority is implementing a policy of repression and restriction of freedom, and that it is muting voices rejecting criminal punishment.

Many leftist and independent political factions strongly condemned the dealing of the demonstrators by force. The Democratic Front for the Liberation of Palestine (DFLP) condemned the brutal repression by the Palestinian security services against the protesters who were demanding the lifting of punitive measures on the Gaza Strip. It called for the formation of a national investigation committee as soon as possible.

The Palestinian Independent Commission for Human Rights also condemned the brutal repression of the demonstrations and called for holding officials accountable and protecting the people’s right to demonstrate and express their opinion. Hanan Ashrawi, a member of the Executive Committee of the Palestine Liberation Organization, denounced the Presidential adviser’s unconstitutional decision to ban demonstrations during the holidays. She strongly condemned the use of force by the police against the demonstrators.

The protest movement began in Ramallah, but it quickly moved abroad. On 23 June, demonstrations took place in Jordan, Lebanon and some European countries. The demonstrations demanded that Palestinian President Mahmud Abbas lift the collective punishment imposed on the Gaza Strip. In addition to Ramallah, several demonstrations were staged in Arab and Western capitals, in front of the Palestinian embassies in Beirut, Lebanon; Amman, Jordan; and New York, USA. In June 2018 in Europe, protests were held in front of the building of the European Parliament in Brussels, Belgium, as well as in Montpellier, France; Milan, Italy; Athens, Greece; Amsterdam, the Netherlands.

The repression of demonstrations in Ramallah has been systematic. A 2016 report by the Henry Jackson Society on democracy, freedom, and human rights stated that the violent reaction of the Palestinian Authority was not the first of its kind. On the contrary, it found that it was part of a series of repressive measures against the opposition and critics of Fatah and the Palestinian Authority in the West Bank.

On 18 June, Fatah tried to organize a demonstration in the city of Gaza to demand the lifting of sanctions, but the demonstration actually aimed to support President Abbas’s punitive steps. A group of young men in civilian clothes intervened and dispersed the demonstration by force but without using violence. Yet the content of media documentation of the incident was erased. Several demonstrators accused the police force affiliated with the Hamas government of breaking up the demonstration.

As long as the one-party system is predominant, whether Fatah’s in the West Bank or Hamas’s in the Gaza Strip, public freedoms and the people’s right to demonstrate will not be guaranteed in both parts of the homeland. The Fatah movement and the Palestinian Authority carry out various forms of persecution against the Hamas and leftist opposition groups. On the other hand, the Hamas-run government oppresses the Fatah opposition in the Gaza Strip too. With one little difference: the leftist forces in the Gaza Strip have larger margins of freedom than the West Bank.