Corruption is a major issue in Iran. Although the religious-political elite acknowledges the problem, little effort has been made to curb the epidemic, which is affecting every facet of political and economic life. There are now mafia structures in various parts of the economy, such as the automotive sector, football clubs, sugar imports and hard currency. Nepotism, high-profile embezzlement and widespread corruption coupled with the extreme income gap between the rich and the poor is threatening the very foundation of the Islamic Republic, 40 years after it was founded.

Although corruption is harmful to any country, it has serious implications for Iran. After all, the regime came to power in 1979 with the mandate of empowering the poor, fighting corruption and establishing a flawless Islamic state. The Ministry of Finance recently estimated that the businesses accounting for 20-25 per cent of Iran’s GDP do not pay taxes. The country’s underground economy is also thriving.

Consequently, it is not surprising that Transparency International ranked Iran 130 out of 180 countries that were examined in 2017. Although corruption is becoming a pressing issue, it has been part of the prevailing political reality for many generations. Even during the Pahlavi dynasty (1925-1979), corruption was a major problem. Particularly after 1973, when the oil prices rose, corruption also rose, creating resentment among the marginalized social classes who later became the foot soldiers of the revolution.

For example, in 1958, the shah established the Pahlavi Foundation as a tax-exempt charity. This foundation held the assets of the royal families which were estimated at $3 billion at its height. It was often accused of corruption. Following the Islamic Revolution in 1979, the foundation was renamed Bonyad-e Mostazafan (‘foundation of the oppressed’), and its economic assets more than doubled after the property of 50 millionaires was confiscated and added to the endowment.

Today, it is one of largest commercial enterprises in Iran and one of the biggest holding companies in the Middle East. It is still tax exempt, and there is very little transparency about its economic activities.

Many other regime entities are also involved in extensive economic activities, taking advantage of their unfair privileges and political and cultural power to gain exclusive economic rights. These entities include the Execution of Imam Khomeini’s Order, the Islamic Revolutionary Guard Corps (IRGC), Shahid Foundation, Astan Quds and the IRGC-linked Basij Organization.

Nepotism brings loyalty to the regime and, more importantly, to the Supreme Leader Ali Khamenei. For example, when a $2.5 billion embezzlement case – the largest in the country’s history – was unveiled in 2011, the supreme leader asked the media to stop reporting on the case.

Yet while the republic’s leading figures publicly complain about the endemic character of the corruption problem, the same figures are themselves implicated in major corruption cases. For example, Parliament Speaker Ali Larijani stated, “Such [financial] crimes are carried out under a political power’s umbrella, making it complicated to investigate them.

In many cases related to economic crimes, footprints of intelligence and influential figures could be seen.” Ironically, the Larijani family stands accused of widespread corruption. In 2013, former President Mahmoud Ahmadinejad addressed the parliament to defend one of his ministers against impeachment. He used the opportunity to play a secretly recorded conversation between Larijani’s brother and a prominent tycoon that implicated the whole family in corruption.

Similarly, Mohammad Ali Jafari, the IRGC’s commander in chief, has pointed to corruption and poverty as the main sources of grievance against the regime. Yet the IRGC is considered as one of the most non-transparent organizations in the country. The IRGC was founded in the early days of the Islamic Republic to safeguard the revolution. The eight-year war with Iraq (1980-88) strengthened its political and security position.

Smuggling goods, to circumvent international sanctions, is one of the most important aspects of Iran’s underground economy. In 2016, the overall volume of goods smuggled into Iran amounted to $15.5 billion, according to Qassem Khorshidi, the spokesperson for Iran’s Central Task Force to Combat the Smuggling of Commodities and Currency. The IRGC is considered as the country’s primary smuggler.

In the early 2000s, Mehdi Karroubi, the former speaker of parliament, complained about unauthorized ports under IRGC control that are used to smuggle goods. Ahmadinejad, who once supported the IRGC to gain unprecedented economic privileges, called the IRGC ‘our smuggler brothers’. The IRGC controls all of Iran’s borders as well as its ports, airports and roads, and it has been accused of using them to its own advantage. Guard commanders own large swathes of real estate in the capital Tehran and are implicated in lucrative cross-border smuggling operations.

At the beginning of his first term in 2013, President Hassan Rouhani declared corruption a “national security threat”. However, his family has also been implicated in corruption. In 2017, Rouhani’s brother was detained in a corruption case, although the charges were vague. Several of Rouhani’s other relatives have shared the same fate.

Recently, the supreme leader said, “Corruption is like the seven-headed dragon. It is difficult to eliminate, but it has to happen.” He urged all branches of government to fight the scourge. However, a six-month investigation by Reuters revealed that he controls a ‘financial empire’ worth approximately $95 billion that is not overseen by the parliament, a figure much higher than the estimated wealth of the late shah.

This is all happening against the backdrop of rising unemployment and poverty and record inflation. The low minimum wage means that most citizens have to work several jobs just to survive. The income gap between the rich and the poor continues to widen. A recent report published at a conference in Tehran titled Measurement and Economic 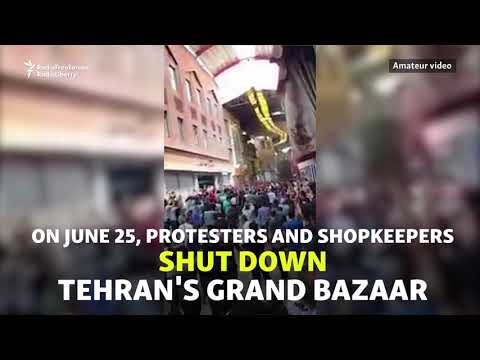 The endemic corruption and high-profile embezzlement cases have created popular resentment. The political elite is aware of the growing anger, which has already led to widespread protests, but radical reform is unlikely. Various segments of the regime, in particular the security apparatus, are benefiting from the current situation in return for their loyalty.

At a time that the regime is facing both a legitimacy crisis inside the country and major external threats, the loyalty of entities such as the IRGC is essential for regime survival. Although widespread corruption is slowly undermining the regime, there is little appetite for change.