In an televised speech broadcast from the Saudi capital Riyadh on 4 November 2017, the Lebanese Prime Minister Saad Hariri announced his resignation, citing the growing Iranian influence across the region and claiming he feared the same fate as his assassinated father, Rafik Hariri, if he remained in power.

Eleven months after forming a government, which came as a result of a deal mainly struck between Hariri and Michel Aoun, a Christian politician and an ally of the Hezbollah military organization, to end the two-and-a-half-year political impasse, Hariri pulled the trigger on a coalition that had struggled to convince the Lebanese public or solve any of the chronic problems that have plagued the country’s politics since the end of the civil war in 1989.

In his resignation speech Hariri said, “[Iran] has a desire to destroy the Arab world and has boasted of its control of the decisions in all the Arab capitals. Hezbollah imposed a reality in Lebanon through force of arms, and their intervention causes us big problems with all our Arab allies.”

Moments after Hariri’s speech, al-Arabiya reported that an assassination attempt on Hariri ‘a few days ago’ had been foiled by Lebanon’s Internal Security Forces (ISF). However, the ISF issued a statement denying its alleged role in foiling the attempt and said it had no information on the issue. The army and the General Security followed suit. 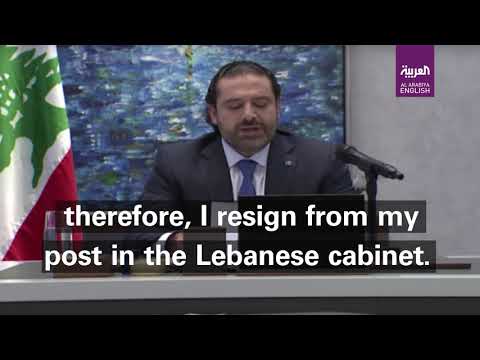 Prior to the assassination of his father in 2005, the security apparatuses also claimed to have no information of a possible attempt on his life. Yet Hariri could have used this alibi in order to nuance what now seems to have been Saudi influence on his decision to step down.

However, Saudi Gulf Affairs Minister Thamer al-Sabhan said that Hariri’s bodyguards confirmed that there was an assassination plot against him. He also denied in an interview with LBCI, a Lebanese TV station, that Saudi Arabia pressured Hariri to resign.

Hariri’s speech, contrary to the rhetoric he has adopted in the past few years, was fiercely anti-Hezbollah, invoking memories of 2008, when Hezbollah seized control of much of western Beirut after the government moved to shut down Hezbollah’s telecoms network. Indeed, the speech seemed closer in tone to the fiery tweets posted by al-Sabhan, who is a vocal critic of Iran. Directly after Hariri’s speech, al-Sabhan tweeted, ‘The hands of treachery and aggression will be cut off.’

The first Iranian reaction came from Hossein Sheikholeslam, senior advisor to the Iranian foreign minister, who accused American President Donald Trump and the Saudi crown prince of pressurizing Hariri into resigning. “Hariri’s resignation was done in coordination with Trump and Mohammed bin Salman to foment tension in Lebanon and the region,” he said.

In an anticipated televised speech on 5 November 2017, Hezbollah chief Hassan Nasrallah made a similar statement, saying, “It was not his intention, not his wish and not his decision to quit.” He also questioned the rhetoric used by Hariri and whether he would be able to return from Saudi Arabia, hinting at a possible house arrest. However, he also called for calm, amid fears that violence could erupt in Lebanon following the announcement.

Martin Chulov, the Guardian newspaper’s Middle East correspondent, wrote the following: ‘Before Hariri’s resignation, several senior officials from Barack Obama’s administration had said a series of coordinated messages in Washington and Riyadh was building a case for military confrontation with Iran. Saturday’s announcement is likely to add to those concerns and increase fears of a clash between Hezbollah and Israel, which fought a devastating war in 2006.”

Indeed, fears in Lebanon of just such a confrontation are mounting. Many observers believe that the ‘resistance axis’, which includes Hezbollah, Syria’s Bashar al-Assad and the Iranians (mainly the influential Islamic Revolutionary Guard Corps – IRGC), is perceived as having won the war in Syria while ousting Islamic State militants from Iraq, and now their focus is shifting back towards Lebanon and Israel.

Previously, as long as the fighting in Syria continued, Hezbollah’s priority was shoring up the al-Assad regime, which has facilitated the transfer of Iranian weapons into Hezbollah’s hands. With al-Assad’s future apparently assured, thanks to Russian and Iranian support, Hezbollah fighters have been returning home to Lebanon, and the leadership has been able to refocus on internal Lebanese battles.

Daniel Shapiro, who served as US Ambassador to Israel from 2011 to 2017 and as senior director for the Middle East and North Africa at the National Security Council under President Obama, wrote in the Israeli newspaper Haaretz that Hariri’s departure heralds the latest ratcheting up of tensions between Saudi Arabia and Iran playing out across the region, with significant implications for Israel.

With the relatively new Saudi leadership embodied by King Salman bin Abdulaziz and Crown Prince Mohammad bin Salman eager to contest Iran from Yemen to Syria to Lebanon, Hariri’s move seems to support Shapiro’s assertion that ‘Saudis are trying to create the context for a different means of contesting Iran in Lebanon: an Israeli-Hezbollah war’.

Over the past year, Israel has seized every official and media opportunity to send the following message: with Hezbollah amassing unprecedented power, experience and weaponry, a war with Israel is only a matter of time, when it will inflict much more widespread damage on the country than in 2006.

Hariri, who shared the government with Hezbollah, is perceived by many – including his Saudi patrons – as providing legitimacy to the military organization. Also, while Hariri was busy attending to the daily business of politics, Hezbollah was tightening its grip on the country.

Hence, by pulling Hariri out of office, the Saudis may hope to ensure that Hezbollah gets the blame and responsibility for Lebanon’s challenges, from pressing social and economic needs to caring for Syrian refugees to mopping up al-Qaeda and IS. This will likely exacerbate tensions in the country, but it will also alienate Hariri’s camp from Hezbollah.

Yet while reports have suggested growing ties between Tel Aviv, Riyadh and Abu Dhabi, it remains unlikely that Israel will go to war at Saudi Arabia’s behest. Hezbollah, meanwhile, which has been hit hard several times by Israeli air strikes in Syria, does not seem to have the appetite for another confrontation at home, which will surely exacerbate negative public feelings towards the organization.

On 8 November 2017, just days after meeting Hariri in the Lebanese capital, Velayati made an appearance in the Syrian city of Aleppo, from which the Syrian army drove rebels after a siege last year with help from Tehran. He was quoted by a Hezbollah media outlet as saying: “The resistance line runs from Tehran and passes through Baghdad, Damascus and Beirut to reach Palestine.”

It seems that, in essence, the problem is Iran’s inflated influence over several key Arab cities, which the Saudis can no longer tolerate. Information about Hariri’s current whereabouts has been scarce, but the Saudi rhetoric on Iran has been upped significantly since the Iran-backed Houthis in Yemen fired a missile at Riyadh’s airport on 4 November 2017.

In light of the recent geopolitical changes, the Saudis may have chosen Beirut as the new battleground to counter Iranian influence in the region. After all, Hezbollah is the success story of Iran’s IRGC, which is now also being imitated in Yemen and Iraq.