I can almost hear the palm trees drinking the rain,
Hear the villages moaning and emigrants
With oar and sail fighting the Gulf
Winds of storm and thunder, singing
‘Rain… rain…
Drip, drop, the rain…

Water has been Iraq’s lifeline since the birth of civilization in Mesopotamia and features prominently in millennia-old epics as well as contemporary poems. In recent decades, water has become the source and victim of conflicts, emerging as one of many environmental problems following years of war, violent insurgencies and gross mismanagement. From Saddam Hussein’s destruction of the unique marshlands ecosystems in southern Iraq during the war with Iran in the 1980s to the burning of croplands in Iraq’s greenbelt in 2019, environmental attacks and ongoing pollution are driving further degradation of the country’s valuable natural and cultural resources.

The breadth of the environmental issues facing Iraq up to the emergence of the Islamic State (ISIS) in the last decade has been documented by news outlets, United Nations agencies and governmental assessments, outlining how poor governance, war, corruption and political neglect ultimately led to the environmental decline. Iraq’s youth is now tasting the bitter fruits of these mishaps. At the same time, growing awareness of environmental issues has bolstered popular movements, fuelled protests and spurred the rise of groups that want to change the course of the country.

A trail of destruction

When the dust settled after the defeat of IS, a worrying picture of the environmental fallout emerged as international organisations, NGOs and journalists who had monitored the conflict published their analysis and assessment. IS’ deliberate burning of oil wells at Qayyarah in Ninawa and the torching of al-Mishraq’s sulphur stockpiles had acute health impacts for thousands of civilians in the vicinity of these sites. Meanwhile, pollution from oil spills, artisanal refining and leaks impacted rivers and agricultural lands, as shown by the United Nations Institute for Training and Research, Bellingcat and PAX. The United Nations Environment Programme and UN Habitat documented the severe impacts of destruction in urban areas, compounding environmental health risks from rubble, damaged industrial areas and other sources with hazardous chemicals. During its occupation and in the course of its retreat, IS destroyed a significant part of the water infrastructure under its control, reducing agricultural production by 40 per cent, according to the IOM. The Iraqi government estimates that $ 5.5 billion dollars is needed to rehabilitate the country’s environment and natural resources, including infrastructure reconstruction and capacity building.

Woes over water and waste

The summer of 2018 proved the fragility of the environment, when over 120,000 people in Basra became ill after drinking polluted water. The incident was linked to an outdated filtration station unable to handle desalinization, caused by a lack of fresh water in the Tigris and Euphrates rivers flowing towards the sea. The situation was worsened by an ongoing drought as well as dam projects in Turkey and Iran, limiting fresh water flows downstream. The waterways themselves were also severely polluted by the dumping of oil and hazardous chemicals, both upstream from the industrial areas in Baghdad and oil dumping in Basra, as documented by Human Rights Watch and the World Bank.

Further concerns have been expressed over the lack of proper waste management capacity, landfills and policies to address water and soil pollution. These problems have been festering for decades. Plans were made prior to 2014 aimed at addressing these concerns, but the IS takeover and the ensuing violence to defeat the group served to worsen the situation in liberated areas. Despite being flagged as a reconstruction priority, progress to improve solid waste management throughout Iraq has been slow due to insufficient funding and lack of a stable government.

Environmental degradation has also put biodiversity and the wildlife population under pressure. From the UNESCO-protected Iraqi Marshlands to the wilderness of the Barzan region, the country’s rich flora and fauna are threatened by industrial pollution, war and climate change. According to the Sixth National Report of Iraq to the Convention on Biological Diversity in 2018, the Iraqi government is working to improve legislation to expand protected areas, though it remains questionable if the goals will be met without proper funding and regulatory enforcement.

The state of the environment is intrinsically linked with the country’s security and socio-economic wellbeing. Iraq’s wealth relies on natural resources such as oil, while food security is largely dependent on agricultural production and, by extension, water. Limited understanding of the scope of the environmental challenge, absence of funding for reconstruction of environmental infrastructure or robust environmental governance has resulted in weak regulation, leading to further deterioration of ecosystems and the livelihoods of the people who depend on them. Climate change is also having an increasing impact on society and the economy, with scorching heatwaves in the south and more frequent droughts contributing to expanding security risks.

Despite these setbacks, there is growing awareness among civil society organisations of the need to address Iraq’s environmental issues. Groups like Nature Iraq and Waterkeepers Iraq as well as Save the Tigris and Save the Euphrates campaigns are working tirelessly and often under pressure to raise environmental issues both on a national and international level. UN Environmental Assembly resolutions have galvanized the clean-up of conflict pollution, while returning rains and policy investments have resulted in cautious progress for the Iraqi Marshlands. Similarly, small reforestation initiatives in Iraqi Kurdistan and greening of cities like Basra and Baghdad are necessary first steps, although they need to be turned into large-scale projects with governmental and international support if they are to bring about meaningful environmental change for future generations. 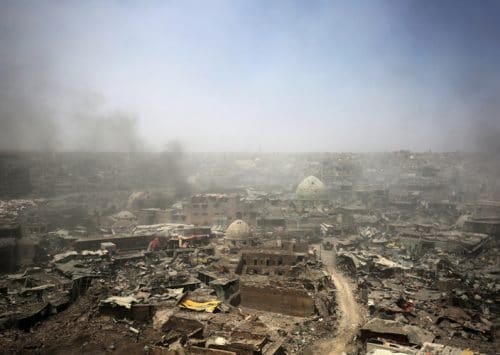 UNEP ©UNEP
UNEP ©Flickr
"Ignorance leads to fear, fear leads to hatred, and hatred leads to violence.
This is the equation."
IBN RUSHD/AVERROES (1126 – 1198)
We are a Dutch not for profit organisation (NGO), financed solely by individuals who share our belief in the importance of publishing and disseminating reliable, unbiased information on the Middle East & North Africa region. To represent the voice of the region’s people, we carefully echo the region’s heartbeat by offering fact-checked and therefore credible information.
Your support is greatly appreciated and helpful!
Donate