Fanack Home / Pollution in the Middle East & North Africa / In Syria, the Environmental Toll of War Beginning to Emerge

In Syria, the Environmental Toll of War Beginning to Emerge

With the war in Syria entering its ninth year, the impact on the country’s environment, its natural resources and the people who depend on them is becoming increasingly pressing. Of course, the humanitarian suffering should be at the forefront of the analysis, but at the same time, the environmental impact deserves a more prominent place at the conflict analysis table, as there are direct links with peacebuilding, conflict resolution and socio-economic reconstruction efforts. This article examines the key challenges that Syria’s environment and the people who depend on it are facing.

The decision in October 2019 by US President Donald Trump to leave a small number of American troops in Syria to ‘protect’ oilfields put the spotlight back on this less visible legacy of war. The slow collapse of industrial oil activities from 2012 onwards resulted in acute and long-term environment and health problems. This was accelerated by the intense bombing campaign of Islamic State (IS) targets initiated by the US-led coalition, quickly followed by Russia’s carpet bombing of entire oil refineries. This campaign to deny IS access to oil revenues went on for years, leaving thousands of smouldering pumping jacks, wellheads, oil trucks and refineries and a charred landscape.

The destruction of professional refineries and storage facilities resulted in unsustainable coping strategies by armed groups and civilians, who established clusters of makeshift refineries, a practice that spread like wildfire throughout Syria. The number of workers, including many children, at these sites was likely in the tens of thousands at their peak in 2015/2016. They faced daily exposure to toxic fumes and hazardous substances and have ongoing concerns about how this will affect their health.

Most of these clusters were shut down in 2017 after protests from communities. However, there remain a large number of active clusters throughout non-government-controlled areas, stretching from Idlib to Hasakah. In the meantime, abandoned makeshift refineries and pools of oil waste and tar lakes in eastern Syria are the visible reminders of this aspect of the war, and local communities have been left wondering how badly their local ground and surface water are affected by oil-linked chemical residues. Current discussions over the exploitation and revenue distribution of oilfields in north-east Syria controlled by the Kurdish-led Syrian Democratic Forces remain opaque.

Damage to the oil industry and subsequent pollution is just one of the many and most visible environmental consequences plaguing Syria. The war has also left a trail of destruction that is affecting water sources, agriculture, forestry, wildlife and biodiversity. Natural resources such as petroleum but also phosphates, chrome, various ores, asphalt and other minerals could be a source of future conflicts as states and armed groups scramble for minerals, gas and oilfields as well as access to forests and agricultural lands.

With an estimated $250 billion needed for reconstruction, states and foreign companies are vying for contracts for resource extraction. In particular, Russian and Iranian companies are eyeing the exploitation of mines, oilfields and critical infrastructure. Prior to the conflict, the heavy industries were already one of the major environmental polluters. Experience from past conflicts shows that lack of proper management, assessment and regulations in the post-conflict phase could lead to worsened environmental outcomes.

The environment essential for survival

During wars and armed conflicts, environmental infrastructure is frequently targeted. Irrigation systems, pumping and filtration stations or sewage plants are essential for a range of civilian and economic activities. Access to clean water is critical for public health and prevention of communicable diseases, while damage to irrigation can directly impact agriculture and food security, as was seen in Iraq and Yemen.

Droughts and mismanagement prior to the conflict had already had disastrous consequences for rural and urban communities in Syria. The subsequent fighting, displacement and collapse of agricultural infrastructure has contributed to worsened crop yields, water use and food security. Various United Nations (UN) agencies are working with the government to assess Syria’s natural resources, and in particular agriculture production, using remote-sensing technology to learn about the state of food security. The results of the assessment will guide decision making regarding irrigation management, crop assessment and potentially also the evaluation of plant health.

Rebuilding from the rubble

Sieges, bombings and intense fighting have laid waste to cities and town throughout Syria. More than 53 per cent of the population living in urban areas has been affected by the destruction. Apart from the direct problems of displacement, urban damage also impacts critical infrastructure that can result in environmental health risks. Moreover, the vast amounts of rubble can pose a serious health risk in themselves. Debris is often mixed with industrial or medical waste and can contain a range of hazardous chemicals or heavy metals to which first responders, clean-up workers and civilians can be exposed.

According to a 2017 World Bank study of damage to ten cities, ‘27 per cent of the housing stock has been impacted, with 7 per cent destroyed and 20 per cent partially damaged’. The study also identified severe damage to medical and educational facilities. The UN’s satellite analysis support program UNOSAT identified 109,39 damaged structures in an 2018 overview, while a 2019 thematic update conducted by REACH in cooperation with UNOSAT-UNITAR of 16 towns and cities provides a more detailed picture. The millions of tons of rubble will likely pose significant risks to the local environment, as will the efforts to extract natural resources for cement used to reconstruct urban areas, as past experiences in Lebanon and Iraq demonstrated.

The collapse of governance systems in towns and cities has resulted in serious problems around waste collection and storage, leading to the outbreak of communicable diseases. While the United Nations Development Programme has contributed to rebuilding this in government-controlled areas, in non-government-controlled areas, there are still critical issues around waste dumping sites that have resulted in sustained health concerns from air pollution from waste burning and groundwater being affected by solid waste leachate.

Lack of governance combined with decreased fuel production and a rising number of displaced people have also contributed to significant deforestation in western Syria as firewood collection, charcoal production and uncontrolled commercial logging have increased. To what extent the conflict has affected the country’s rich biodiversity has not been independently researched, but according to Syria’s submission to the UN Convention on Biological Diversity in 2016, several protected areas, protected plants and animal species have been impacted.

A thorough and comprehensive assessment is needed to understand the full extent of damage to Syria’s environment and the environmental health risks for civilians. The Middle East as a whole is facing crucial challenges regarding environmental degradation as a result of climate change, hydro-politics and lack of proper natural resources management. This brings with it serious direct and long-term security risks, hampers reconstruction and can foster more tensions with authorities over access to natural resources and responsibilities for dealing with environmental legacies.

In Syria, clean-up of environmental hotspots, rehabilitation of affected areas and sustainable reconstruction are necessary to alleviate the burden on the Syrian people and provide them with opportunities to rebuild their lives and livelihoods in a safe and healthy environment. 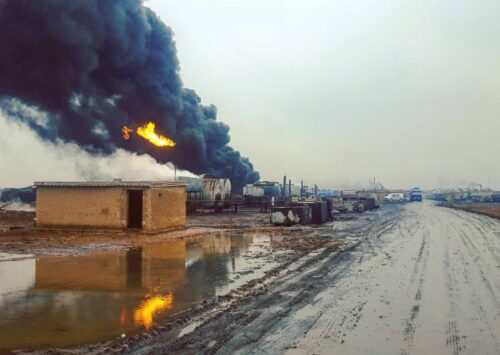 In Syria, the Environmental Toll of War Beginning to Emerge
In Syria, clean-up of environmental hotspots, rehabilitation of affected areas and sustainable reconstruction are necess...