Fanack Home / Qatar / Past to Present of Qatar / Alliances

The Emir of Qatar’s freedom of action is also restricted by foreign powers. Qatar is a small country with a very small national population. It has never been able to stand on its own against more formidable outside aggressors. The country’s leading sheikhs have always had to rely on the goodwill and protection of greater powers. One way to placate them is to simply pay up. Thus, around the year 1850, Mohammed bin Thani collected the local tribute for the sheikhs of Bahrain. In the early 20th century, Abdullah bin Jassim secretly paid Ibn Saud a yearly stipend. Ali bin Abdullah sent Baluchi concubines to the Saudi monarch. Alliances could also be brokered through intermarriage – as for example through the Al Thanis’ traditionally warm relations with Dubai’s Al Maktoums – or through the adoption of an ideology or creed – like Jassim bin Mohammed’s acceptance of Wahhabism and the present Emir’s embrace of the American ideology of the free market.

The sheikhs traditionally allowed foreign powers some domestic influence in exchange for military protection and personal prestige. Thus Jassim bin Mohammed welcomed an Ottoman garrison in Doha in 1872 and became their official representative afterwards. The British were rewarded with the 1916 Treaty – which brought Qatar solidly within the British sphere of influence – after their intervention in the succession crisis of 1913. When the British finally left in 1971, the acting ruler Khalifa bin Hamad had no choice but to turn to Saudi Arabia to guarantee the safety of his young nation. When Hamad bin Khalifa deposed his father in 1995, he tried to free Qatar from Saudi-Wahhabi influence by turning to the United States instead. All these alliances and treaties with more powerful nations have shaped the policies of the ruler to a certain degree.

Former emir Hamad bin Khalifa’s internal politics were characterized by promises of democratization. In 2003, a new constitution was approved in a national referendum. According to this document, the Advisory Council will be replaced by a parliament. Two-thirds of its members will be elected directly by the people. The emir, who continues to appoint his own ministers, will choose the remaining candidates. Freedom of association, expression, and religious affiliation are guaranteed, although political parties remain illegal. However, implementation of the most promising articles of the constitution has been extremely hesitant. Parliamentary elections were announced for 2004, but they have still not taken place, presumably because of continuing opposition within the ruling family. As of July 2013, after Hamad’s smooth handover of power to his son Tamim, no elections had been held.

Irrespective of domestic reasons for the present standstill in Qatar’s programme of political reform, it is clear that the US is no longer pressing the Gulf regimes for greater public participation in politics. After the American led invasion of Iraq, the US administration is all the more dependent on the friendship of Gulf states. The geopolitical threat – and competition – from Iran is an added reason for keeping relations with the Gulf Cooperation Council (GCC) nations free from ideological or humanitarian concerns. 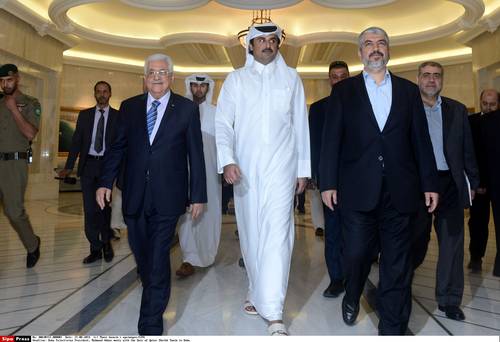 Foreign Policy
Foreign Policy
Qatar is repositioning itself as a new regional player, maintaining ties with opposing parties such as the US, Iran, and...

LUCAS JACKSON ©AFP
"Ignorance leads to fear, fear leads to hatred, and hatred leads to violence.
This is the equation."
IBN RUSHD/AVERROES (1126 – 1198)
We are a Dutch not for profit organisation (NGO), financed solely by individuals who share our belief in the importance of publishing and disseminating reliable, unbiased information on the Middle East & North Africa region. To represent the voice of the region’s people, we carefully echo the region’s heartbeat by offering fact-checked and therefore credible information.
Your support is greatly appreciated and helpful!
Donate