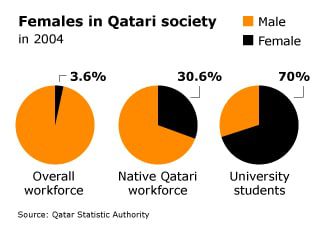 Qatar can expect to see an increasing number of highly educated young women entering the job market. It remains to be seen how these women will cope with – or change – a still overwhelmingly male dominated country. In 2004, 3.6 percent of the overall workforce and 30.6 percent of the Qatari citizen workforce was female. At that time, about 70 percent of university students were female – and they were known to work harder and achieve higher grades than their male companions. Those who found a job typically entered economic sectors traditionally associated with women, notably education and medicine. Nevertheless, Qatari women can increasingly be found in the business and security sectors.

Article 35 of the Constitution stipulates that ‘there shall be no discrimination on account of sex’. However, a wide gap exists between the ideals of the Constitution and the actual situation. Although since 2005 women have received the same salary as men, they are not entitled to equal allowances (such as transportation and housing costs). The testimony of one man still equals that of two women in court. And while women may attend court proceedings and represent themselves, they are still generally represented by a male relative. Girls can inherit only half as much as their brothers. Domestic violence continues to be a major problem, and marital rape is not legally considered a crime. Perpetrators of so-called ‘honour killings’ can expect substantially lower sentences than ‘common murderers’. Tradition requires women to travel abroad with male escorts, and they are prevented from booking hotel rooms.

In 1997, the Emir announced that women would be granted the same rights as men to vote and to stand for office. This intention met with opposition from a group of more fundamentalist Islamic leaders, including a professor of history at Qatar University who was subsequently jailed for a hundred days. At the first election of the 29-member Central Municipal Council in 1999 none of the female candidates gained a seat. When the Council was re-elected in 2003, Sheikha al-Jufayri became the first female councillor. But she faced no competition and with a meagre 38 percent, voters’ participation was even lower than in 1999. In this context it is interesting to note that in recent, relatively free elections in the region – in Kuwait, the Occupied Palestinian Territories and Egypt – women did not vote differently from men when faced with the choice between liberal and conservative-Islamist candidates.