AFP- Selembouha Dadi can only imagine the homeland she dreams of but has never seen, agonisingly out of reach beyond the Algerian refugee camp where she has spent her whole life.

“They tell me it was beautiful,” the 25-year-old told AFP.

The territory that Dadi yearns for is Western Sahara, a sprawling swathe of desert on Africa’s Atlantic coast that has been disputed by Morocco and independence fighters from the Polisario Front for decades.

Her father Moulay abandoned everything and fled 42 years ago when Moroccan troops arrived in 1975 during the rush to claim the former Spanish colony as Madrid let it go.

Now, along with tens of thousands of other refugees, their family of nine lives in one of a string of refugee camps just 50 kilometres (30 miles) away, beyond the Algerian border and a “defence wall” erected by Morocco in the 1980s.

Morocco and Mauritania were meant to share Western Sahara when Spain relinquished control, but in 1976 the Polisario proclaimed the independence of the Sahrawi Arab Democratic Republic — and was determined to fight for it.

Rabat considers Western Sahara an integral part of Morocco and proposes autonomy for the resource-rich territory, but the Algerian-backed Polisario Front insists on a United Nations-backed referendum on independence.

The 2,700-kilometre barrier erected by Morocco slicing from north to south divides the 80 percent of Western Sahara controlled by Morocco from the 20 percent held by the Polisario.

Moulay Dadi, 72, served tea in a large traditional tent, a vestige of the Sahrawis’ nomadic past, and cooler than the nearby family cottage with its zinc roof.

He recalled his life back in his desert homeland herding the family’s animals. He was 30 when the Moroccan forces arrived.

“We fled and we left everything behind us, our animals, our property, the houses,” he said.

“We left everything behind us.”

He settled in Algeria’s Tindouf region with his wife and parents, who did not live to see their homeland again.

Some 100,000 Sahrawi refugees live today in the camps around Tindouf. They belong to a mosaic of nomadic tribes who have for centuries plied the sandy expanses of the Sahara with their camels.

The Dadi family’s Boujdour camp, which, like the other camps, bears the name of an area of the Western Sahara controlled by Morocco, is dotted with brown-walled houses the colour of the surrounding desert, one of the most inhospitable in the world.

Their home consists of a large living room, a small dining room and a kitchen. The shower and toilets are in a separate building. There is intermittent electricity and no running water. Trucks pass regularly to fill a large canvas water reservoir.

Like the Dadis, many Sahrawis have set up traditional tents next to their houses in the camp, where life moves slowly.

After the morning prayer, Selembouha Dadi and her mother, in her sixties, cook and clean. The youngest of the children, 12-year-old Mellah, goes to school.

Some of her brothers work on building sites and the others are in the army of the Sahrawi Arab Democratic Republic.

Sahrawi refugees in Algeria live mostly on funds from exiled relatives in Europe and on international aid.

The European Union provides some, $11.6 million (10 million euros) a year, despite the Polisario Front being accused of embezzlement in recent years.

Some residents have set up small shops — groceries, bakeries, fruit and vegetable stalls — in the camps.

Others work as officials for the SADR, which has its central administration in Rabouni, not far from Tindouf.

Isolated for decades and largely forgotten by the world, many Sahrawis still believe that they will one day return to the lands of their ancestors.

“We want our land whatever we find there,” Selembouha said. 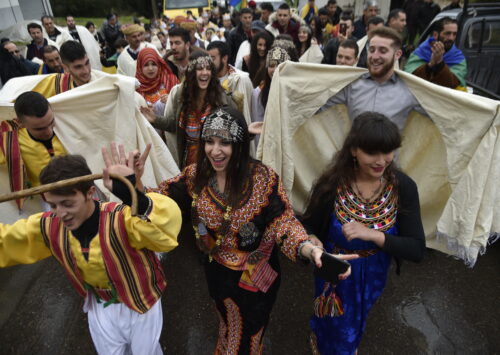 Population of Algeria
Given the country’s large surface area, the overall population density is low, with sixteen inhabitants per square kil...