Movies in the Arab Gulf: What’s On?

Movie theatres in Arab Gulf countries are growing exponentially. In 2015, movie theatres in Qatar doubled from 48 to 95. In the United Arab Emirates (UAE), the 356 theatres made over $145 million in 2015, making the UAE market more profitable than the rest of the Arab market combined. While there are no public cinemas in Saudi Arabia, an official from the Saudi Producers’ Association stated in August 2015 that movie theatres were not banned in the country and a licence to open one takes no more than 72 hours to acquire. Indeed, there were more than 50 theatres in Saudi during the 1960s. Saudis today can watch movies in foreign embassies’ cinemas, sport centres, and even petroleum companies’ theatres. Bahrain Petroleum Company was the first to open a theatre in the country that is believed today to host the largest theatre complex in the Middle East, with 20 screens.

The irony, however, is that Arab Gulf movies are not the ones topping these box offices. Certainly, the region has made progress since 2004, creating sophisticated film festivals such as the Dubai International Film Festival, the Gulf Film Festival, and the Doha Tribeca Film Festival. This encouraged local producers to distribute their films, mix with international professionals, and create a film culture in the region. Beginning in the mid-2000s, Gulf countries started the professional production of films such as the “Threads beneath the Sand” (Qatar), “Sun Dress” (UAE), “Wadjda” (Saudi Arabia), as well as “Bialal,” the first animated movie in the world to have eleven and half minutes of uncut animated footage. Cinema in the Arab Gulf still struggles to satisfy the Gulf audience, which continues to look outside for better alternatives. Travelling on a Gulf airline, it is no longer a surprise to find just one or two Gulf movies amongst the hundreds of choices to watch on a flight.

Neither Gulf culture nor the awareness of cinema and movies is to be blamed. Rather, the Arab Gulf cinema does not appeal to the local viewers. Until recently, professionals from the region argued that the Arab Gulf cinema was non-existent. According to Khaled al-Siddiqi, the president of the Arab Gulf cinema association, movies being made in the Arab Gulf were not enough to build an Arab Gulf cinema genre. Renowned Kuwaiti actress Hayet el Fahd blamed that fact on the lack of support and funding, which often discourages artists from venturing into the field. Khaled al-Siddiqi, from Kuwait, sold his real estate and jewellery and then directed one of the first successful Arab Gulf movies, “Bess ya Bahr” (“The Cruel Sea”) in 1972, an independent movie that won many regional and international awards. Other problems noted by Arab Gulf movie professionals include amateurism and the lack of training for young talent. This led to the production of predominantly short movies attractive to young talents seeking experience and lacking funding opportunities.

Dubai authorities began to honour this genre in the Arab Indo Bollywood Awards festival (AIBA). AIBA is attended by Bollywood stars in order to please a growing number of fans in the region. In 2012, the Dubai Film Festival celebrated the hundredth anniversary of Bollywood. The significant South Asian communities living in the Gulf are a major reason for the phenomenon. The many expats and immigrants from South Asia living in countries such as the UAE, KSA, and Qatar have made Gulf populations increasingly familiar with the messages and stories of Bollywood movies. Many Bollywood and Pakistani movies (Lollywood) are filmed in Arab Gulf major cities such as Dubai. Furthermore, Bollywood’s exaggerated romantic comedies and stories of revenge often appeal to the quiet and conservative societies of the Arab Gulf. Complaints about the disconnection between the Arab Gulf cinema and the expectations of the local audience explain why the audiences are fleeing to foreign films.

Like everwhere else in the world, Hollywood movies are popular. In the age of globalization, movies such as “Mission Impossible” and the James Bond series absorb the Arab Gulf youth who don’t find the local cinema convincing. Releasing such movies in Arab Gulf cinemas is now simultaneous with their release in the United States. It sometimes even happens a day before, because Thursday night is the start to weekends in the Gulf.

The governments of Qatar and the UAE have even tried for more than simultaneous release. Movies such as “Fast and Furious 7,” “Star Wars: The Force Awakens,” and “The Bourne Legacy” were filmed in the UAE, and “Transformers” was filmed in Qatar’s desert. Governments of the two countries offered financial and legal incentives to attract the productions. At the same time, Arab Gulf audience sometimes feel that Hollywood movies transgress the morals and values of their societies. While some see them as informative or simply entertaining, much of society has reservations about some of their violent and sexual content, and some viewers favour censorship of such content. In the most extreme cases, authorities in several Arab Gulf countries have banned movies depicting prophets.

While trying to reconcile Arab Muslim social values with quality of production and accessible language, Arab Gulf viewers found in Arab cinema, especially that of Egypt, a good alternative. Egyptian cinema is a pioneer in the Arab world, including the Arab Gulf. It is no coincidence that Egypt has produced 95% of Arabic-language movies since the 1940s. Furthermore, 90% of Egyptian classical movies are sold to Arab Gulf TV channels. However, delays in releasing the movies in Arab Gulf theatres after they are released in Egypt and other Arab countries has caused customer dissatisfaction and damaged the profitability of movies. The delays are allegedly due to the bureaucracy of Egyptian movie-theatre companies.

Currently, there are national debates in the Arab Gulf on how to invest in local cinema production. The challenge lies in producing long films that are consistent with Arab Gulf values and heritage and are narrated, directed, and acted by Arab Gulf artists. Until then, only television dramas fulfil the expectations of the local audience, who will continue to rely on foreign movies. 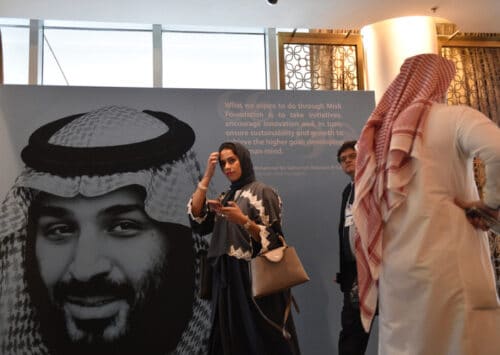 Corbis ©Hollandse Hoogte
"Ignorance leads to fear, fear leads to hatred, and hatred leads to violence.
This is the equation."
IBN RUSHD/AVERROES (1126 – 1198)
We are a Dutch not for profit organisation (NGO), financed solely by individuals who share our belief in the importance of publishing and disseminating reliable, unbiased information on the Middle East & North Africa region. To represent the voice of the region’s people, we carefully echo the region’s heartbeat by offering fact-checked and therefore credible information.
Your support is greatly appreciated and helpful!
Donate