Gulf countries could save up to three billion barrels of oil, if they reach their 2030 renewable-energy targets. This would save them about $200 billion, according to the International Renewable Energy Agency (IRENA).

Such huge quantities of oil could be exported instead of consumed domestically, said energy and oil expert Mazen Irsheid in an interview with Fanack in November 2015. Irsheid said that falling oil prices should prompt Gulf countries to diversify their energy mix as well as their revenue sources.

In several reports on the future of renewable energy in the states of the Gulf Cooperation Council (GCC) made available to Fanack on 30 November 2015, IRENA said that the Gulf states have seen rapid economic growth and have become major energy consumers, with electricity consumption increasing at nearly 8 per cent per year. According to IRENA, GCC per capita energy consumption, estimated at 7 million tonnes of oil equivalent, far exceeds that of the larger economies of the US, China, and the EU.

IRENA said that GCC electricity consumption is expected to reach 856 terawatt-hours (TW·h[1]) by 2020, requiring 100 gigawatts (GW) of additional power over the next ten years to meet demand.

IRENA says that Gulf countries are as richly endowed with renewable resources as they are with hydrocarbons. They benefit from strong regular sunshine and the space to develop large solar power plants, but the agency believes that, despite the potential, some barriers remain that may prevent renewable energy from becoming a reality in GCC countries. These include an absence of renewables-friendly regulations and highly subsidised fossil fuels.

Irsheid told Fanack that Gulf states can be world superpowers in renewable energy, as they are currently in oil production, if only they invest in the clean energy.

He cited the United Arab Emirates as the leading country among the six GCC countries for launching several solar-power projects that include the Dubai Solar Park (10 megawatts, MW), the solar photovoltaic park in Abu Dhabi (10 MW), and Masdar City (1 MW), also in Abu Dhabi.

He noted that, instead of planning such schemes only when oil prices decline, GCC countries should consider giving renewable energy a permanent share of their power mix.

“Ninety per cent of Gulf countries’ revenues come from oil and gas,” he said, adding that, in addition to diversifying their revenue sources by launching new industries, the GCC states should consider the use of renewables in order to reduce domestic consumption of government-subsidised fuels. “They should rely heavily on solar power for domestic consumption and save hydrocarbons for export purposes,” Irsheid said, adding that the Gulf has more that 330 sunny days per year.

IRENA says that renewable energy has become economically attractive in the oil-rich United Arab Emirates (UAE).
Increasing renewables to ten per cent of the country’s total energy mix, and 25 per cent of total power generation, could generate annual savings of $1.9 billion by 2030 by reducing fossil-fuel consumption and could lower energy costs, IRENA said. The agency also said that, taking into account health and environmental benefits, additional net annual savings of $1 billion to $3.7 billion by 2030 could be generated.

According to the Ministry of Electricity and Water of Kuwait, the country, which has one of the highest per capita energy-consumption rates in the world, plans to reach its target of generating 15 per cent of its energy from solar power by 2030.

The ministry said it is seeking to generate a total of 2,000 MW of renewable energy by 2030 by launching three projects. The first phase will be a 70 MW energy park scheduled to be completed by 2016. This facility will be built on 100 square kilometres of desert. The second and third phases are projected to produce 930 MW and 1,000 MW, respectively.

Economic growth, urbanization, and industrialization have all contributed to continued rising domestic energy use. Oil consumption has nearly doubled during the past decade. Electricity use has grown along with GDP, and domestic use of natural gas more than tripled from 2000 to 2012, said IRENA, which noted that the country possesses important untapped renewable-energy resources. The level of solar radiation in all regions of Oman is reckoned to be among the highest in the world. Wind is also a promising renewable energy resource, especially in the coastal and southern parts of Oman.

IRENA said that Oman is developing an energy strategy that entails the production of ten per cent of its electricity needs from renewable energy resources.

In accordance with its National Vision for the coming 15 years, Qatar is seeking to produce 20 per cent of its energy from renewables by 2030. Irsheid doubted the tiny Gulf state could reach this goal, because the country’s target for 2020 is only two per cent. “I think it would be an achievement if they reach a 10 per cent [of energy from renewables],” he said.

In August of this year, the state-owned power company announced its first solar-power facility, with a generation capacity of ten to 15 MW. The project is scheduled to be operating by 2016, according to Qatar General Electricity and Water Corporation (Kahramaa).

Bahrain, the smallest of the six GCC countries, aims to produce five per cent of its energy from renewables by 2030. The country’s energy resources are limited, and its domestic oil production is estimated at only 30,000 barrels per day. According to IRENA, Bahrain plans to build a 500 MW concentrated-solar-power plant, in addition to small-scale hybrid power plants using solar and wind.

Saudi Arabia is the world’s largest oil producer and exporter, but its future in solar energy is not very sunny. The Kingdom’s domestic consumption of fossil fuels is expected to nearly triple by 2030, according to International Energy Agency, which estimated that the demand for energy may grow to 8.4 million barrels of oil equivalent in 2028 from 3.4.

Saudi Arabia’s target of renewable energy is between 16 and 22 per cent in 2032, according to IRENA. It plans to build solar projects with a total capacity of 40GW. King Abdullah City for Atomic and Renewable Energy (KACARE), established in 2010 by late king Abdullah Bin Abdul Aziz, seeks to make the oil-rich state self-sufficient in sustainable energy.

A report by Reuters on 8 September 2015, however, said that there are differences over the Kingdom’s solar ambitions, as there are concerns about the scale of the project, its ownership, and the technology.

Reuters said that regulations governing the development of the sector, long awaited by foreign investors who set up offices in the kingdom in anticipation of huge, lucrative solar projects, have still not been approved, industry sources said.

[1] One TW·h equals one billion kilowatt-hours. 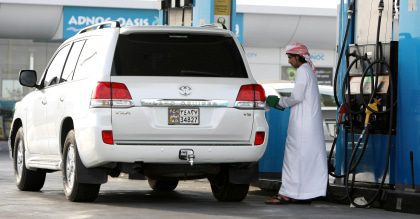 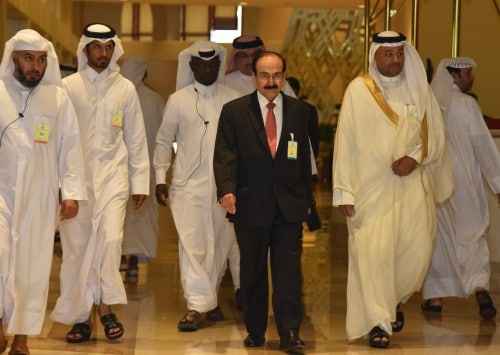