The bodies of water on either side of the Arabian Peninsula provided relatively easy access to the neighbouring river-valley civilizations of the Nile and the Tigris-Euphrates. Once contact was made, trading could begin, and, because these civilizations were rich, many goods passed between them.

Once contact was made, rich civilisations began trading lucratively, and the region quickly became a profitable trading hub.

The coastal people of Arabia were well-positioned to profit from this trade. Much of the trade centred on present-day Bahrain and Oman, but those living in the south-western part of the peninsula, in present-day Yemen and southern Saudi Arabia, also profited. The climate and topography of this area also permitted greater agricultural development than was possible on the coast of the Persian Gulf.

Generous rainfall in Yemen enabled the people to feed themselves, and the export of frankincense and myrrh brought wealth to the area. As a result, civilization developed substantially in southern Arabia by about 1000 BCE. The peoples of the area lived in small kingdoms, or city states, of which the best known is probably Saba—possibly the Sheba of the Old Testament. Due to the prosperity of Yemen, the Romans referred to it as ‘Arabia Felix’ (literally, ‘Happy Arabia’).

However, outside of the coastal areas and a few centres in the Hijaz associated with the caravan trade, the harsh climate of the peninsula combined with desert and mountain terrain limited agriculture and rendered the interior regions difficult to access. The population probably subsisted on a combination of oasis gardening and herding, with some portion of the population being nomadic or semi-nomadic. 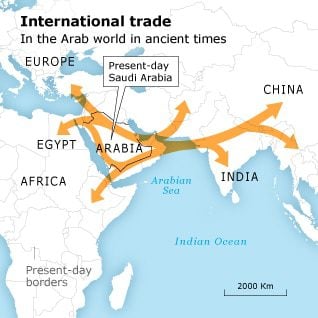 The material conditions under which the Arabs lived began to improve around 1000 BCE. A method for saddling camels had been developed for transporting large loads. The camel was the only animal that could cross large tracts of barren land with any reliability. The Arabs could now benefit from some of the trade that had previously circumvented Arabia. The increased trans-Arabian trade produced two important results. One was the rise of cities that could service the trains of camels traversing the desert. The most prosperous of these – such as Petra, in Jordan, and Palmyra, in Syria – were relatively close to markets in the Mediterranean region, but small caravan cities developed within the peninsula as well. The most important of these was Mecca, which owed its prosperity also to certain shrines in the area visited by Arabs from throughout the peninsula.

Some Arabs, particularly in the Hijaz, held religious beliefs that recognized several gods and had rituals for worshipping them. The most important beliefs held that certain places and times of year were sacred and to be respected. At those times and in those places, warfare, in particular, was forbidden, and various rituals were required. Foremost of these was the pilgrimage, and the best known pilgrimage site was Mecca.

The second result of the Arabs’ increased involvement in trade was the contact it provided with the outside world. In the Mashriq (the eastern part of the Arab world), the Persians and the Romans were the great powers in the centuries before the advent of Islam, and the Arab tribes that bordered these territories were drawn into their political affairs. After 400 CE, both empires paid Arab tribes to protect their southern borders and to harass the borderlands of their adversaries.

In the long term, however, it was the ideas and people that travelled with the camel caravans that were the most important. By 500 CE one of several religious options existed in the Arab world. The Sabaeans of southern Arabia followed their own system of beliefs, which had some adherents in the interior. Followers of pagan beliefs were widespread in the peninsula. In addition, there were well-established communities of Christians and Jews as well as hanifs – mentioned in the Koran and believed to be followers of an indigenous monotheistic religion. Along the Gulf coast were Nestorians, while in Yemen, Syrian Orthodox and smaller groups of Christians were to be found among Bedouin and in monasteries that dotted the northern Hijaz. In the 6th century, shortly before the birth of Muhammad, the city of Najran, in what is now south-western Saudi Arabia, had a Christian church with a bishop, monks, priests, nuns, and lay clergy and was ruled by a Jewish king. Jews were an important part not only of the Yemeni population but also of the oasis communities in the region of Medina. 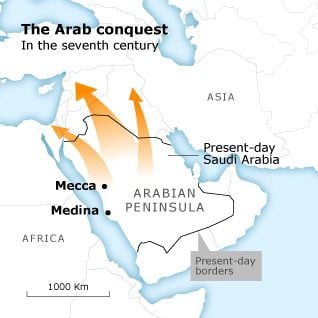 The Saudis and many other Arabs and Muslims trace much of their heritage to the birth of the Prophet Muhammad in 570 CE. The time before Islam is generally referred to as the Jahiliya, the time of ignorance.

Muhammad, whose full name was Abu al-Qasim Muhammad ibn Abd Allah ibn Abd al-Muttalib ibn Hashim, was born in Mecca at a time when the city was establishing itself as a trading centre. For the residents of Mecca, tribal connections were still the most important element of the social structure. Muhammad was born into the Quraysh, which had become the leading tribe in the city because of its involvement with water rights for the pilgrimage; Qusai ibn Kilab was the guardian of the Kaaba. By the time of Muhammad, the Quraysh had become active traders as well, having established alliances with tribes all over the peninsula. These alliances permitted the Quraysh to send their caravans to Yemen and Syria. Accordingly, the Quraysh were in many ways the facilitators and power brokers for the new status quo in Arabian society.

The message of the Prophet Muhammad was disturbing to many of the Quraysh for several reasons. He attacked traditional Arab customs that permitted lax marriage arrangements and the killing of unwanted offspring. More significant, however, was the Prophet’s claim that there was only one God, because, in condemning the worship of idols, he threatened the pilgrimage traffic from which the Quraysh profited.

By the time of his death in 632 CE, Muhammad enjoyed the loyalty of almost all of Arabia. The peninsula’s tribes had tied themselves to the Prophet with various treaties but had not all become Muslim. The Prophet expected others, particularly pagans, to submit but allowed Christians and Jews to keep their faith, provided they paid a special tax (the jizya).

After the Prophet’s death, most Muslims acknowledged the authority of Abu Bakr (died 634), an early convert and respected elder in the community. Abu Bakr maintained the loyalty of the Arab tribes by force, and in the battles that followed the Prophet’s death – which came to be known as the apostasy wars – it became essentially impossible for an Arab tribesman to retain traditional religious practices. Arabs who had previously converted to Judaism or Christianity were allowed to keep their faith, but those who followed the old polytheistic practices were forced to become Muslims. In this way Islam became the religion of most Arabs.

The Prophet had no spiritual successor, inasmuch as God’s revelation (the Koran) was given only to Muhammad. There were, however, successors to the Prophet’s temporal authority, the rulers called caliphs (successors or vicegerents). Abu Bakr was the first caliph, who successively launched campaigns against the powerful Sassanids and Byzantines. Caliphs ruled the Islamic world until 1258, when the last Abbasid caliph and all his heirs were killed by the Mongols. For the first thirty years, the caliphs managed the growing Islamic empire from Yathrib, which had been renamed Madinat al-Nabi (the City of the Prophet) or al-Madina al-Munawwara (the Illuminated City). This is usually shortened simply to Medina (the City).

In a short time, the caliphs had conquered a large empire. With the conclusion of the apostasy wars, the Arab tribes united behind Islam and channelled their energies against the Roman and Persian empires. Arab-led armies pushed quickly through both of these empires and established Arab control from what is now Spain to Pakistan.

At the same time, many pilgrims began to visit the peninsula regularly, with some settling in the holy cities of Mecca and Medina. These pilgrims mediated the exchange of ideas and cultures between the people of the peninsula and other civilizations of the Arab and Muslim worlds.

The achievements of Islam were great and various, but after 656 these achievements ceased to be controlled from Arabia. After the third caliph, Uthman, was assassinated in 656, the Muslim world was split. Within the umma (community of believers) much feared Fitna (an Arabic word with connotations of secession, upheaval, chaos) arose. Especially after caliph Ali’s death and the murder of his sons Hasan and Husayn, Islam branched into Sunni en Shia. The fourth caliph, Ali (murdered in 660) spent much of his time in Iraq. After Ali, the Umayyads established a hereditary line of caliphs in Damascus. The Umayyads were overthrown in 750 by the Abbasids, who ruled from Baghdad.

The emergence of Arabic as the language of international learning was another factor in the cultural development of the Arabian Peninsula. Particularly under the Abbasids, the Muslim world became a centre for learning and scientific advances during what is known as the Golden Age. Muslim scholars made major contributions in many fields, including medicine, mathematics, philosophy, astronomy, arts, and literature. Many of the ideas and methods pioneered by Muslim scholars became the foundation of modern sciences

Parts of the region now known as Saudi Arabia were annexed by the Ottoman Empire in phases, beginning in 1517, first Hijaz with Mecca and Medina, and later Hasa, the strip of land along the Persian Gulf. At yet a later stage, Istanbul succeeded in gaining political hegemony in Asir and present-day North Yemen.

The Ottoman Empire maintained nominal suzerainty over Arabia until World War I. The Hashemite emir of Mecca, Husayn ibn Ali, who was also the Sharif of Mecca (the Custodian of the Two Holy Mosques in Mecca and Medina), ruled on behalf of the Ottomans in the Hijaz, while the rest of Arabia fell under the rule of local tribal chiefs. Ottoman sultans were concerned mainly with the security of the holy cities of Mecca and Medina, the pilgrimage destinations of Ottoman and other Muslims. Lack of significant economic resources, coupled with a harsh climate made direct rule in Arabia an unattractive adventure. The Ottomans maintained indirect rule to ensure the security of the pilgrimage. This allowed local power centres in Arabia to compete for the control of the meagre resources and trade routes. Local emirates based in oases and small towns rose and fell throughout the years, without any being able to unify the territory into a single polity.