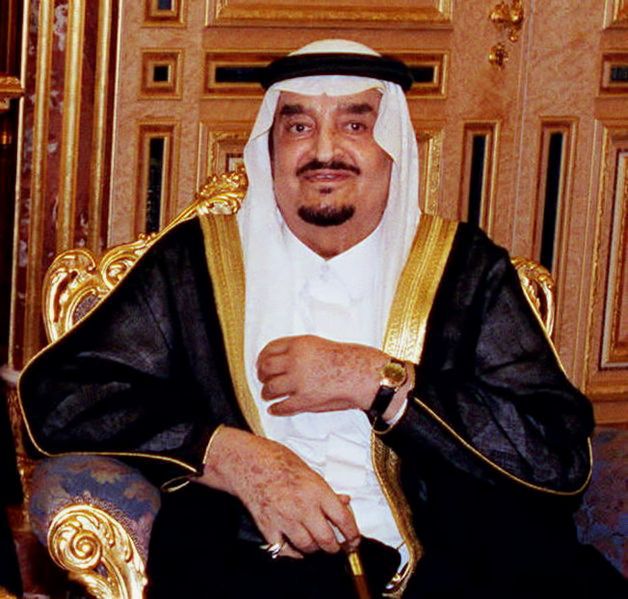 With the downfall of the regime of the Shah of Iran in 1979 Saudi Arabia became increasingly important to the United States, not only for its oil reserves but also for its strategic location. King Fahd strengthened the Saudi alliance with the United States and played a major role in financing the Iran-Iraq War (1980-1988), with the hope of curtailing the new Shiite islamist regime in Tehran.

Although Saudi Arabia had rejected the 1978 Camp David Accords between Israel and Egypt, Saudi Arabia proposed a new peace initiative to end the Palestinian-Israeli conflict.

The so-called Fahd Plan of 1981 implied recognition of the State of Israel in exchange for the complete withdrawal by Israel from the 1967 conquered Palestinian Territories and the dismantlement of all the Jewish settlements there, followed by the establishment of a state of Palestine with East Jerusalem as its capital.

To counter the perceived threat from Iran, Saudi Arabia encouraged the establishment of the Gulf Cooperation Council (GCC) and contributed financially to the Afghan jihad resistance against the Soviet Union, after its invasion of that country in 1980. These initiatives led to a solid partnership with the United States.

Saudi Arabia was threatened for the first time in its modern history when the Iraqi army invaded Kuwait in 1990. King Fahd allowed 500,000 foreign troops to defend the country, especially its oil fields in the Eastern Province, and to facilitate logistically a US-led counteroffensive. Islamists in the kingdom challenged this decision and mobilized young Saudis against the King’s decision.

Faced with rising unemployment, falling oil prices, and a mounting debt, the government resorted to repression. Many Islamists were imprisoned, and their activities began to be monitored. Two major attacks in 1995 and 1996 indicated possible future threats. The government resisted introducing major political changes but announced the new Basic Law of Government in 1992 and the establishment of an appointed Majlis al-Shura (Consultative Council) in response to pressures for reform.

Relations with the United States were tense following 9/11, as fifteen Saudis took part in the attacks on New York and Washington. Western attention was focused on Saudi Arabia as a source for global terrorism: while various American reports absolved the Saudi government of any responsibility, Saudi religious teachings were considered contributing factors. Saudi Arabia was pressured to monitor and control religious education and finance networks that were believed to have contributed to terrorism. After a long struggle with old age and illness, King Fahd died on 1 August 2005, aged 82.