During his reign, the Saudi economy boomed due to ever increasing oil revenues. There was a special focus on agriculture, while the foundations were laid for the industrial cities of Jubail and Yanbu – nowadays important centres of economic activity. The Kingdom’s Third Development Plan with a planned budget of USD 250 billion was implemented starting in May 1980.

A year later, in 1979, the Islamic Revolution in Iran caused a huge upset. It not only shook up the Persian Gulf region and beyond, it was also feared that it would have political consequences for Saudi Arabia’s oppressed and deprived Shiite community. Acts of resistance remained however limited.

The Seizure of the Grand Mosque 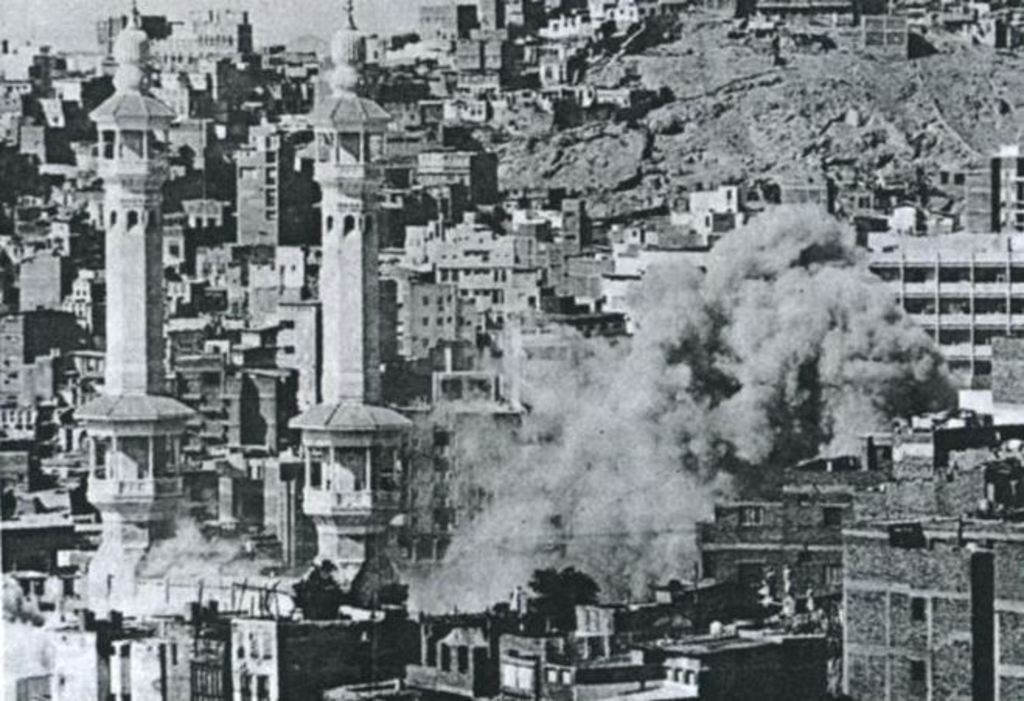 Smoke rising from the Grand Mosque during the assault on the Safa-Marwa gallery, 1979. Photo WikipediaOne of the most important turning points in the history of Saudi Arabia was the seizure of the Grand Mosque in 1979. The siege, which lasted about two weeks, shook the foundations of the ruling House of Saud and had a profound impact on the socio-political landscape of the country. Given the fact that the consequences of the siege are still felt in the country, and the region, it is imperative to reassess the event forty years after its occurrence.

20 November 1979 started out like any normal day. Around fifty thousand people gathered inside the holiest site in Islam to perform the morning prayer. As Sheikh Mohammed al-Subayil was preparing to lead the prayer, a group of armed men violently took control of the Grand Mosque, or al-Masjid al-Ḥarām in Arabic.

Given the unprecedented nature of the event at the time, and since the religion of Islam forbids any kind of violence and bloodshed at or inside holy sites, the Grand Mosque was not heavily guarded by security forces. Because there were only a few security personnel around who were primarily there to control the large crowd, the insurgents, who comprised around five hundred armed men, quickly and easily gained full control of the site.

Although the insurgents eventually released some of the worshipers, they kept some as hostages and locked them in the mosque’s sanctuary. They also placed snipers in the minarets, which made the task of recapturing the Grand Mosque much more difficult.

During the first attempt, about 100 Saudi security officers attempted to recapture the mosque, but their mission failed and they sustained heavy casualties. Although both the Saudi Army and the National Guards quickly got involved, King Khalid did not seem to have full confidence in them. He invited both the Pakistani military’s Special Forces and French National Gendarmerie Intervention Group (GIGN) units to support this highly complex anti-insurgent operation, which required the evacuation of the entire city of Mecca.

Juhayman al-Otaybi, the leader of the insurgents, came from the distinguished Najd region, which was historically close to the House of Saud; his grandfather was an associate of Ibn Saud, the founder of the kingdom. Some of his other family members were important Ikhwan members, which was a powerful militia that had helped Ibn Saud defeat other contenders of power within the country.

Al-Otaybi was initially a member of the Saudi National Guard but, given his deep interest in religion, he would later on become a preacher. He also went to study under Sheikh Abdel Aziz al-Baaz who, incidentally, was the Grand Mufti of Saudi Arabia when the siege took place. Al-Otaybi had grown disillusioned with the House of Saud and eventually regarded them as a corrupt family that did not safeguard authentic Islamic values in the country.

He was critical of the “westernization” policies of the state and opposed the introduction of modern communication tools such as television; he also did not agree with the arrival of non-Muslim guest workers in Saudi Arabia who came to work in the then-booming oil industry.

Al-Otaybi claimed to have had a vision from God telling him that Mohammed Abdullah al-Qahtani was the Mahdi (“the guided one”), who would arrive on earth several years before Judgement Day. Al-Otaybi and Qahtani had met while imprisoned together for sedition and al-Otaybi used portions of the Hadith to authenticate his claims regarding the messianic role of al-Qahtani, who also became his brother-in-law.

The date of the attack, 20 November 1979, coincided with the first day of the year 1400 in the Islamic calendar. This could have been deliberately tied to the idea of the mujaddid who, according to tradition, is a man who appears at the turn of every century to restore Islam to its original immaculate purity.

Given the religio-political sensitivities surrounding the Grand Mosque, the Saudi state had to seek a fatwa (ruling) from the ulama (Islamic scholars) in order to undertake a violent operation in the holiest mosque in the Muslim world. Some scholars remained silent, while others did not declare al-Otaybi and his followers non-Muslims despite their violation of the sanctity of the Grand Mosque.

Although some scholars eventually gave the House of Saud the green light to use force, they insisted that the state must first offer the insurgents the option to surrender before any bloodshed ensued. When al-Otaybi refused to surrender, the state then had a religious fatwa at hand to undertake a full anti-insurgent operation to recapture the mosque.

As the mosque was under the control of al-Otaybi, the insurgents used the mosque’s loudspeakers, which were connected throughout the streets of Mecca, to justify their actions by criticizing the House of Saud and calling for certain demands, which included an immediate end to oil exports to the United States and the expulsion of expatriates from the country. The siege continued for about two weeks until the Grand Mosque was finally violently recaptured by the state.

The exact figures are still not known, but the state claimed that the siege left “255 pilgrims, troops and fanatics” dead and “another 560 injured.” Mohammed Abdullah al-Qahtani, the supposed Mahdi and redeemer of the age, was killed in the crossfire, while mastermind al-Otaybi and 67 other insurgents were captured and beheaded.

Dr. Afshin Shahi, a senior lecturer in Middle East studies at Bradford University, said in an interview with Fanack, “it is true that the Grand Mosque seizure was a turning point in the history of Saudi Arabia, but if we really are to appreciate the significance of the event, we must look at the wider regional context at the time. What was happening in the region when Juhayman al-Otaybi captured the Grand Mosque?”

He explains that “indeed, 1979 was a pivotal moment in the history of the Middle East for many different reasons. The Egypt–Israel peace treaty and the recognition of Israel by Egyptian president Anwar Sadat finally paved the way for the demise of Arab nationalism. The end of Arab nationalism as a powerful mobilizing force in turn set the stage for the empowerment of Islamist ideologies, which began to drastically change the socio-political landscape of the Arab world. At this stage, we began to see further politicization and instrumentalization of Islam to fill that ideological gap.

Activist movements with either a political or religious agenda were now convinced Islam was a winning card that could be employed as a potent mechanism to politicize, mobilize and radicalize the masses in order to confront authoritarian states across the Middle East.”

Dr. Shahi adds that “the Saudi state, which was happy to see the demise of Arab nationalism, was now seriously alarmed by what was happening in Iran. Revolution was in the air and Saudi leaders – along with other regional counterparts – were afraid of the spillover effect in their countries.”

Dr. Shahi further explains, “the siege of the Grand Mosque came as a huge shock to the political system, both in Saudi Arabia and the wider region. As a result, after finally overcoming the siege, the Saudi political establishment decided to increase its dependency on Wahhabism to maintain the status quo. From that point on, we began to see the further empowerment of Wahhabi ulama in Saudi Arabia and the rapid implementation of radical social policies, which mainly championed hard-line and intolerant religious perspectives.

The Saudi establishment began to pour millions of dollars in religious institutions within and beyond the kingdom, which rapidly changed the religious landscape across the Muslim world. Billions of dollars were invested in building madrassas (religious schools) and mosques to promote the Saudi version of Islam. At home, the Saudi national curriculum changed and, accordingly, a large portion of schooling time was devoted to religious studies that promoted a very intolerant version of Islam that was antagonistic to both Shiites and non-Muslims.”

“Indeed,” he concludes, “the siege was a major turning point for Saudi Arabia and the Muslim world at large, as evidenced by the fact that even forty years later, we are still experiencing its aftermath.”