Ibn Saud died on 9 November 1953, aged 77, leaving his eldest son Saud bin Abdulaziz Al Saud (born 1902) to assume the title of King. Before his death Ibn Saud had designated his eldest son as his successor, although Saud’s half brother, Faisal bin Abdulaziz (born 1906), was much fitter for the job. Fearing the political consequences of escalating rivalry between his two sons, Ibn Saud designated Faisal as Crown Prince to the future King (later he would also serve as Prime Minister and Minister of Foreign Affairs).

As a country allied with the United States, Saudi Arabia felt the pressure of a growing anti-Western and anti-colonial mood in the Arab world. Egypt’s president Gamal Abdul Nasser became its ideological and political opponent during the reign of King Saud. Inspired by Arab revolutionary rhetoric, a group of princes led by Talal bin Abdulaziz Al Saud, another son of Ibn Saud (and a half brother of King Saud), fled to Egypt and established the Free Princes Movement. The movement demanded the transformation of Saudi Arabia into a constitutional monarchy. The movement remained in exile without achieving its objectives. The same applied to non-royal Arab nationalist and communist oppositional forces.

King Saud inherited a kingdom lacking modern institutions and state bureaucracy but with promising wealth. The new wealth was squandered on palaces and consumption, and only rudimentary modernization was possible. The state finances were mishandled. In 1964, after years of internal strife between King and Crown Prince over matters like these, Faisal with the support of the majority of the other princes, challenged the King’s authority and forced him to abdicate. Thereupon Saud left the country. He died in Greece on 24 January 1969, aged 67. 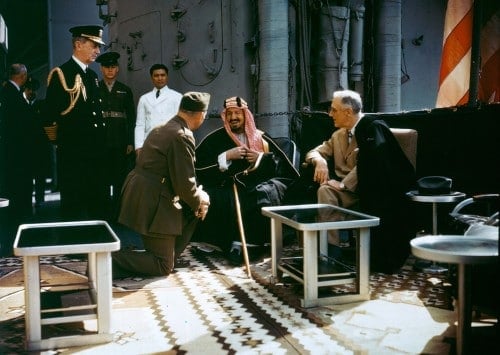 Ibn Saud and the Foundation of the Kingdom
The Al Saud established their control in Riyadh in 1902 and, with the approval of the British, expanded into the Eastern...