Saudi Arabia is rounding up political activists, journalists, judges and religious figures for ostensibly undermining the monarchy. On 12 September 2017, the Saudi Press Agency confirmed that the kingdom’s counterterrorism agency was monitoring suspects who were colluding with ‘foreign powers’.

Yet political commentators suspect that the real reason for the arrests is to punish influential figures who have not fully endorsed Crown Prince Mohammed bin Salman (MBS) and his policies.

Activists Abdul Aziz al-Shubaily and Issa al-Hamid, founding members of the Saudi Civil and Political Rights Association (ACPRA), a group that advocates political reform based on new interpretations of Islamic law, are among those who have been arrested. ACPRA itself was dissolved by authorities in 2013.

Sarah Leah Whitson, Middle East director at Human Rights Watch, which monitors abuses worldwide, said that the imprisonment of these two activists prove that MBS has no genuine ambition to improve Saudi Arabia’s freedom of speech record or battle extremism. “Saudi’s alleged effort to tackle extremism is all for show if all the government does is jail people for their political views,” she said.

Samah Hadid, Amnesty International’s director of campaigns, added that MBS appears determined to crush Saudi Arabia’s human rights movement. “Saudi Arabia’s embattled human rights community has already suffered heavily at the hands of the authorities, and now with these latest arrests almost all the country’s most prominent human rights defenders are in prison on bogus terrorism-related charges,” she said in a statement.

At just 31 years old, MBS is the youngest heir to the Saudi throne. In June 2017, he ascended to power with the blessing of his father King Salman, who ousted the former crown prince  Mohammed bin Nayef, putting him under house arrest. MBS is now the most powerful figure in the kingdom, dominating its fiscal, domestic and foreign policy.

Although many Saudis hope that MBS can improve their flagging economy through his ambitious Vision 2030 plan, he is steadily building a reputation as a brash and impulsive ruler, going to war against rebels in Yemen and, together with Abu Dhabi’s Crown Prince Mohammed bin Zayed (MBZ), trying to control Qatari policies.

The sweeping arrests are not helping his image. Judges and political commentators, some renowned for criticizing extremists, have been seized. Prince Abdul Aziz bin Fahd, the son of a former king and a nephew of King Salman, has also been imprisoned. Saudi officials have not confirmed yet.

Some critics speculate that MBS is cracking down on anyone who disagrees with his diplomatic feud with Qatar, especially those who believe that the Gulf crisis has exposed the limits of Saudi Arabia’s power in the region. Others suspect that King Salman has permitted MBS to clamp down on his opponents before assuming the throne. One senior figure in the kingdom told the Guardian newspaper that MBS is particularly cautious of anyone connected to Mohammed bin Nayef or the old guard.

If MBS becomes king, Saudi Arabia could chart an entirely different path. Dr Azzam Sultan Tamimi, a political commentator for the al-Hiwar (‘dialogue’) network, suggests that MBS could reshape Saudi Arabia into a less conservative society, albeit without adopting the values of a liberal democracy. “Is he a despot? Yes. Is he an authoritarian? Yes. Does he believe in any ideology? I don’t think MBS believes in anything other than himself,” Tamimi told Fanack.

Popular religious clerics Salman al-Odah, Awad al-Qarni and Ali al-Omari have also been arrested. These figures are considered moderate personalities in Saudi Arabia, having built a large following on social media in recent years. Al-Odah tweeted for peace between Qatar and Saudi Arabia just hours before he was detained.

“I was very surprised that these men were arrested,” noted Tamimi. “These men have been a moderating influence over young men in Saudi Arabia over the past five or six years. Even if they didn’t fully agree with MBS on some issues, I thought the crown prince would see them more as an asset to his rule than a threat.”

Instead, the clerics have been rounded up with nearly 30 others. Officials loyal to MBS claim that those arrested have conspired with the Muslim Brotherhood and the Houthi rebels in Yemen, two groups that the Saudi rulers classify as terrorist organizations. Al-Odah, for one, is a known supporter of the Brotherhood, publicly endorsing its aspirations to participate in government at the start of the Arab Spring.

On 21 September 2017, Saudi clerics  issued a statement that spread quickly on social media, condemning the arrests and what they view as increasing despotism in Saudi Arabia. The statement, which did not reveal the clerics’ names for fear of reprisal, urged Saudi authorities to stop seizing members of the old guard or banning them from travelling. They also accused the United Arab Emirates and Egypt of lobbying MBS to make the sweeping arrests.

The accusation might not be completely unfounded. Some political analysts speculate that MBZ is mentoring MBS. Politico magazine wrote in June 2017 that MBS generally accepts MBZ’s counselling but would be horrified by the perception that he is an understudy. That said, the extent of MBZ’s influence over MBS is unclear.

Speculation aside, Saudi Arabia’s top religious body has supported MBS and his crackdown. However, the crown prince still risks backing himself into a corner as he consolidates power. Tamimi claims that members of the royal family are looking for a strong figure to oppose the crown prince. That could be Ahmad Abdul Aziz, who served as the deputy interior minister for 37 years before stepping down in 2012. Although perceived as a man of integrity by his counterparts, he is reportedly reluctant to oversee any serious reforms in the conservative kingdom.

“I’m told Ahmad Abdul Aziz is the person most capable of bringing members of the family around to challenge MBS,” Tamimi said. “The internal dynamics of the royal family is revealing. Many of its members feel vulnerable and threatened by this young man.” 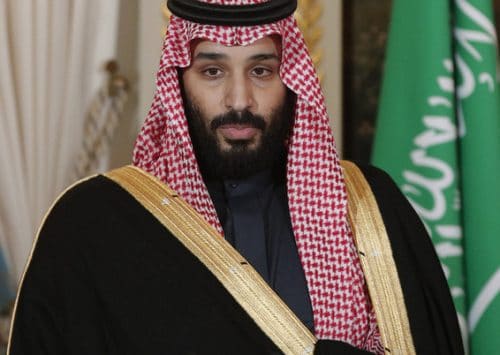 Saudi Arabia Launches Smear Campaign Against Women’s Rights Activists
Some see in the arrests and smear campaign against the activists an attempt to erase the history of hard-fought grassroo...