Saudi Arabia has adopted a multipronged approach to fight jihadism, the extreme Islamic ideology that calls for jihad (holy war) against non-believers as well as fellow Muslims whom it regards as apostates. This ideology has been the prime engine of religiously inspired violence in Muslim-majority countries and in the West.

For years, Saudi Arabia was reluctant to acknowledge that it too faced a jihadist threat. However, after suffering several terror attacks during the 1990s, it was forced to acknowledge the problem and began confronting the militants on its own territory.

After the 9/11 attacks in the United States (US), the jihadist threat became a worldwide concern, as did Saudi Arabia and its response to the militant ideology, which many believe has its roots in the kingdom. The fact that 15 of the 19 terrorists who flew the planes into the World Trade Center and the Pentagon were Saudi nationals focused global attention on Saudi culture and put the authorities there under growing pressure to tackle the threat of violent Islamism by, for example, curbing the influence of clerics preaching hatred and violence towards the infidel West.

Gradually, the Saudis came to realize that guns and bullets were only part of the solution. Alongside deploying the coercive machinery of the state – the usual security crackdown and incarceration – in 2004, the government began pursuing a more moderate approach to de-radicalize its jihadists. This included rehabilitating convicts with the aim of persuading them to disavow their extreme beliefs and re-integrate into society.

Central to the Saudi deradicalization approach is a process known as munassaha, which roughly translates as ‘counselling’. The process starts in prison and involves clerics engaging with convicts to persuade them that their notions of jihad are based on a misinterpretation of the Koran.

Along with the religious ‘detoxification’, the other component of the programme relies on modern socio-psychological techniques. To this end, the Saudis have built special facilities to ensure that those released from jail will return to society and start a new life. The first to be developed, in 2007, was the Mohamed bin Nayef Counselling and Care Centre, outside the capital Riyadh. There, ex-convicts can spend up to three months and receive art and sports therapy as well as vocational training.

The programme also engages the families of ex-convicts to ensure that they too play a role in monitoring and prevention. This is a crucial component of the programme in a society where notions of family honour and tribal solidarity can influence compliance with prevailing norms and customs.

Those who are very poor or do not come from larger tribes that can help re-integrate them receive financial assistance to get married and set up a home and even to find a job. Money also plays an important part in the approach because al-Qaeda and the Islamic State (IS) have targeted their recruitment at the disenfranchised and poor. Financial assistance from the government could help to counteract that.

The Saudi authorities say the success rate of their approach has been as high as 90 per cent, although this figure is difficult to verify since there is no independent assessment. There have been a few cases of recidivism, the most prominent of which is that of Said al-Shihri, a former detainee in Guantanamo Bay, who completed the deradicalization programme but went on to become a senior al-Qaeda leader in Yemen and masterminded the bombing of the American embassy there in 2008.

In another case, nearly 60 out of 88 arrested al-Qaeda suspects were reported to have been through one of these rehabilitation programmes.

This has led some experts to conclude that the programme may work with some jihadists but not all. ‘The effectiveness of the rehabilitation campaign is limited mainly to minor offenders and jihadist supporters and sympathizers who may already be looking for a way out of jihadism, having been disillusioned by the circumstances leading to their capture,’ says a report by the Washington-based think tank The Middle East Institute. The hardliners, the report suggests, are beyond redemption.

The challenges facing the Saudi approach, especially the religious re-education aspect of it, should not be underestimated. Saudi Arabia’s official Islam – known as Wahhabism – shares a number of core beliefs with radical jihadists. Central to both belief systems is the notion of takfeer – declaring fellow Muslims apostates because they do not ascribe to the austere and puritanical version of Islam espoused by the jihadists as well as the official Saudi doctrine. The two also share a visceral hatred of the other Abrahamic faiths, namely Christianity and Judaism.

Despite the official policy of deradicalization, an estimated 2,500 Saudis were believed to have joined IS by 2017. Their motivation for doing so coincides with the Saudi government’s declared policy of fighting the growing influence of Shia Iran in both countries. The jihadists – like the official Saudi religious establishment – regard the Shias as a heretical sect and a major threat to Sunni Islam.

Further, recent reports have shown that Saudi Arabia continues to support its own brand of ultraconservative Islam abroad, primarily in North Africa and Asia, which many believe is often a gateway to militant Islam.

This has left a lingering suspicion among some observers that while the Saudi government fights militant Islam on its home turf, it continues to lend financial support to radical or ultraconservative Islam abroad when and where it suits its own interests. Of this calculated ambivalence, Christopher Davidson, a British regional expert, said in the Washington Post, “There is also a sense that IS, ugly as it may seem, is actually a useful temporary ally for Saudi Arabia so long as it can be corralled in the direction of Iran and its allies rather than Sunni-majority states.” 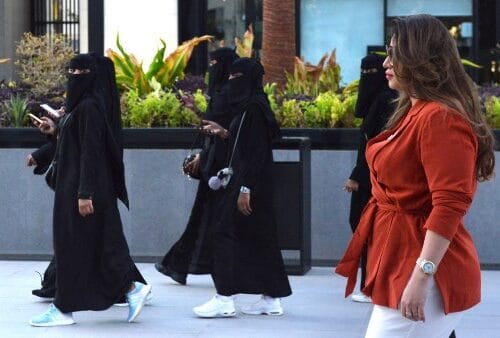 Saudi Arabia Takes First Step to Disengage from Wahhabism After Centuries of Alliance
MBS’ clampdown on religious militancy has been described as the first step towards disengagement between the Saudi reg...