During his reign, the Saudi economy boomed due to ever increasing oil revenues. There was a special focus on agriculture, while the foundations were laid for the industrial cities of Jubail and Yanbu – nowadays important centres of economic activity. The Kingdom’s Third Development Plan with a planned budget of USD 250 billion was implemented starting in May 1980. Saudi Arabia took a strong position against the 1978 Camp David Accords between Israel and Egypt. It broke off its diplomatic relations with Egypt and joined economic sanctions against the country. Much to the chagrin of its US ally – the sponsor of the Camp David Accords.

A year later, in 1979, the Islamic Revolution in Iran caused a huge upset. It not only shook up the Persian Gulf region and beyond, it was also feared that it would have political consequences for Saudi Arabia’s oppressed and deprived Shiite community. Acts of resistance remained however limited.

Seizure of the Mecca Mosque

A more imminent threat was posed in November 1979 after five hundred radical Saudi Wahhabi armed rebels took over the Masjid al-Haram (Grand Mosque) in Mecca in an act of resistance against the Saudi leadership, whom they accused of straying from the right path.

It took the Saudi security forces, assisted by French military specialists, two weeks (20 November 20 to 4 December 1979) to retake the Mosque. The surviving rebels were tried and beheaded.

After the outbreak of the Iraq-Iran War in 1980, Saudi Arabia realigned itself with its Western allies and played an important role in supporting Iraq – financially as well as logistically. 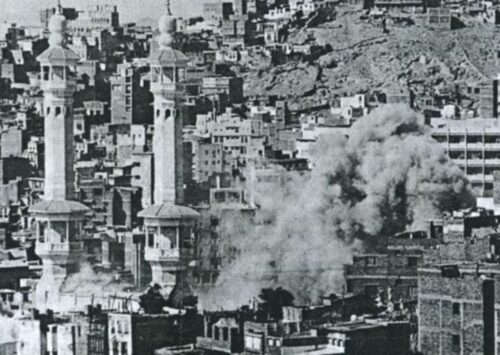