Following the arrest of several prominent Saudi activists who had pushed for women’s rights, including the right to drive, the kingdom’s government and media have launched a public relations offensive to brand the activists as traitors.

At least 17 people have been detained. According to a statement put out by the state-controlled news agency on 18 May 2018, they had dared ‘to violate the country’s religious and national pillars by making suspected contacts in support of the activities of foreign circles and, moreover, recruiting some individuals in sensitive government positions, providing the foreign circles with money with the aim of destabilizing the kingdom.’

On 2 June 2018, the public prosecutor’s office put out another statement announcing the ‘temporary’ release of eight of the activists. It said that the four women and five men still in custody had confessed to charges that they ‘communicated and cooperated with individuals and organizations hostile to the kingdom’, recruited persons in a sensitive government entity to obtain confidential information and official documents to harm the higher interests of the kingdom’ and ‘provided financial and moral support to hostile elements abroad’.

Following each of the statements, Saudi media went into a frenzy, publishing articles and opinion pieces condemning the activists. Images of the detainees with the word ‘traitor’ stamped across their faces was widely circulated on social media, along with the hashtag #عملاء_السفارات, or ‘embassy agents’, implying that the activists were on the payroll of foreign governments. The popular SaudiNews50 Twitter account posted the images with the words ‘History spits in the faces of the traitors of the nation’.

The Saudi newspaper al-Jazirah ran a front-page article with the headline ‘You are damned and your treason is damned’, followed by a series of opinion pieces accusing the activists of ‘an unforgiveable crime’, and declaring that ‘whoever sells the homeland for a handful of money has no place among us’.

Other media outlets and figures made similar statements, and many social media users went even farther, calling for the activists to be executed.

Although the government did not release the names of the detainees, rights groups said they included some of the highest profile activists campaigning for women’s rights in the kingdom, including Eman al-Nafjan and Loujain al-Hathloul, both of whom had actively campaigned to lift the ban on women driving and abolish the male guardianship system for Saudi women. The two women had previously been arrested for violating the driving ban. Also among those arrested was 60-year-old Aziza al-Yousef, who was one of the country’s earliest activists for the right to drive.

Al-Nafjan, al-Hathloul and Yousef are reportedly among those who remain in custody and are being held incommunicado, according to Human Rights Watch.

Before the arrests, on 12 May 2018, the Saudi government had attracted controversy by detaining Prince Nawaf Talal al-Rashid. Al-Rashid, who holds dual Qatari and Saudi nationality, was deported to Saudi Arabia by Kuwaiti authorities after he travelled to Kuwait to visit friends. The United Nations expressed concern about his ‘arbitrary detention’, as Saudi authorities have released no information about his fate or the charges against him.

On 26 September 2017, a royal decree was issued lifting the driving ban, effective 24 June 2018. The kingdom is also preparing, for the first time, to introduce a law to ban sexual harassment. The measures appear to be part of a charm offensive by Crown Prince Mohammed bin Salman to assure Western backers that he is a reformer with plans to modernize the country.

However, some see in the arrests and smear campaign against the activists an attempt to erase the history of hard-fought grassroots struggle by women demanding reforms.

“The narrative they’re trying to project is that this reformer crown prince is giving women the right to drive as if it just came out of a vacuum,” Kareem Chehayeb, Saudi Arabia researcher with Amnesty International, told Fanack Chronicle.

At the same time, both the arrests and smear campaign are meant to send a message to others who might push for reforms, Chehayeb said. “It contributes to the ongoing fear of dissent and human rights work, even in its most peaceful form.”

Others have suggested that the arrests were a tactic by the crown prince to appease more conservative elements in Saudi society who may be upset by the erosion of religious authority, including the reining in of the religious police.

Chehayeb described the international response to the activists’ arrest as muted, in spite of an expression of concern by the United Nations and a resolution passed by the European Parliament calling for the activists’ release. Despite the statements, some of Saudi Arabia’s most influential allies – including the United States – have remained noticeably silent.

In response, human rights groups and supporters have launched their own public relations campaign highlighting the activists’ record of pushing for reform and calling for their release. Using the hashtag #Beep4Freedom, supporters posted their own images of the activists with ‘innocent’ stamped over their faces.

For those who had been hopeful that a new day was dawning in Saudi Arabia, the arrests came as a shock. Manal al-Sharif, a Saudi activist living abroad in Australia who helped launch the campaign for women’s right to drive in 2011, wrote on Twitter when the end of the driving ban was announced, ‘Saudi Arabia will never be the same again. The rain begins with a single drop.’

Following the arrests, she wrote, ‘My optimism has been dashed by the state-led public smearing campaign against the arrested activists. Accusing them of treason is nothing less than outrageous. Their only “crime” is against the inhumane male guardianship system in Saudi Arabia, against the institutionalized discrimination we have experienced every day of our lives. Their true “treason” is loving their home country too much.’ 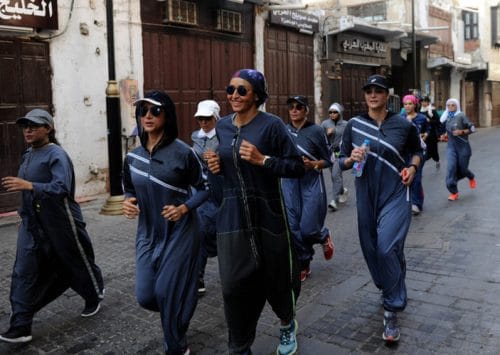