Another WID (Women International Day) passed this year with yet another disappointment for the women of Saudi Arabia, as they saw their hope dwindle of getting behind the wheel. After years of campaigning, there is still no indication that Saudi women will be granted permission to drive their own cars. Saudi Arabia is the only country in the world in which women are forbidden to drive.

This has not prevented women in Saudi Arabia from trying to gain this right, which would mean that they would become more empowered and better able to move around without the interference of a male companion or a chauffeur. It would also mean an important step towards their treatment as full citizens, with no enforced dependence on any other party.

In 1990, after the US army, including female drivers, entered Saudi Arabia in connection with Iraqi invasion of Kuwait, a group of 47 professional Saudi women gathered and paraded in their cars on the streets of Riyadh. It was the first attempt of its kind to demonstrate against the ban against Saudi women driving in their own land. The participants lost their jobs and were immediately suspended from any public role in the kingdom.

Three days after this demonstration, the then Grand Mufti of Saudi Arabia, Abdel Aziz Bin Baz, issued a fatwa in which he formalized the ban on women driving, claiming that it was needed to protect women and to prevent fitna, or discord, in society. According to Bin Baz’s fatwa, a car accident or a flat tire might interfere with the legal segregation between men and women and cause social chaos. Social chaos spilling into the streets is what the Saudi authorities fear most and want to prevent at all cost.

This made it more  difficult for women to risk another driving experiment, and it was not until 2007, that Saudi activists Wajeeha al-Huwaider and Fawzia al-Uyyouni prepared a petition. They collected some 1,100 signatures from Saudis in favor of women’s right to drive and delivered it to King Abdullah, who had been in power for about two years and had already shown a great deal of support of women. As a matter of fact the king said in 2005, after his accession, that he was certain women would drive one day, but that the society was not yet ready. “The issue will require patience. In time I believe it will be possible”.

In 2008, with International Women’s Day approaching, al-Huwaider filmed herself driving and posted the video on YouTube, for which she received international media attention. Al-Huwaider’s drive began inside a residential compound, where women are permitted to drive, as roads within the compound are not considered public thoroughfares. The trip did not stop there, however, and she managed to leave the compound and drive along a main highway. Al-Huwaider expressed the hope that the ban on women driving would be lifted before International Women’s Day in 2009.

In 2011, women found in the Arab Spring movements a new opportunity to campaign for women’s right to drive. More women had become motivated by the realization that no rights would be granted them unless they sought them aggressively and independently. A group of young women activists initiated a series of campaigns, combining their efforts under one major, kingdom-wide campaign called “Women2Drive”, with the slogan “Teach me how to drive so I can protect myself”. More than 12,000 supporters around the kingdom demonstrated their support for the campaign, and more people joined later. The campaign included demonstrations of women driving on streets throughout Saudi Arabia, including Manal al-Shareef, who was detained until the king himself called for her release. Another attempt was made by Najla Hariri, from Jeddah, who stressed the need for this to happen for the safety and security of women. Among other important arguments are the financial loss the Kingdom suffers in the form of the salaries of 760,000 foreign drivers—which amount to billions of riyals annually—and the fact that many poor women cannot afford a driver.

Most of those in favour of women’s driving are said to be liberals or intellectuals, including male supporters such as Abdullah al-Alami, who has personally initiated many campaigns and supported all others. Al-Alami has been attacked by some extremists in the Kingdom, but not all opponents of women’s driving are Islamists: some oppose it, not because they are very religious but  because they think it a convenient way to keep women in their accustomed place. As a matter of fact, traditions and social constraints are greater obstacles than religion. There are people such as Salman al-Ouda and Aydh al-Garni who are prominent Islamic preachers and support women’s rights, including the right to drive. On the other hand, some women oppose it, in the belief that this will lead to unwanted freedom that would corrupt the morals of the securely conservative country.

Women in Saudi Arabia need a male guardian in many aspects of their lives. A Saudi woman cannot become a full citizen even when she reaches legal age, as she will always require a permission from her male guardian—who may be her father, her brother, or even her son—to obtain her national ID or her passport and be able to travel abroad. Most importantly, she will need his approval if she is to be able to work and open her own business, even with her own money.

Hope rose with the accession of the present king, Abdullah bin Abdul-Aziz, who has shown a great deal of interest in stimulating the educational, economic, social, and political development of Saudi women. He gave women the right to vote—although there have not been any important elections so far—and he appointed 30 female members to the Shura Council (one-fifth of the total); the Shura Council is appointed by the king and advises the monarch on policy but cannot legislate. The question remains, of course, whether they will ever be able to drive their own cars to those meetings.

Recently, a petition prepared by several Saudi women has been making the rounds of the social-media channels and has been sent to targeted emails, in order to collect as many signatures as possible. One of the petition’s  demand calls for the end of the ban on women driving. Since the new movement against the driving ban began in 2011, many women have been arrested, detained, and warned orally and in writing to refrain from such acts for the rest of their lives.

Some female members of the Shura Council in October 2013 moved that women be given the right to drive, but the male-dominated council blocked the proposal. Dr. Hanan al-Ahmadi, a law professor, and Dr. Thuraya al-Ureedh, an ex-Aramco employee, headed the campaign in the council.

On the occasion of President Obama’s visit to Saudi Arabia, on 28-29 March 2014, women planned a new demonstration of women driving in the streets, but only a few women answered the call this time. Obama himself did not raise the subject of women’s rights during his talks with Saudi leaders.

Although some Saudi women claim that women’s driving is not the most important topic to focus on these days, especially considering the many other violations against Saudi women, others argue that it can be used as leverage to obtain equal rights. Time will tell. 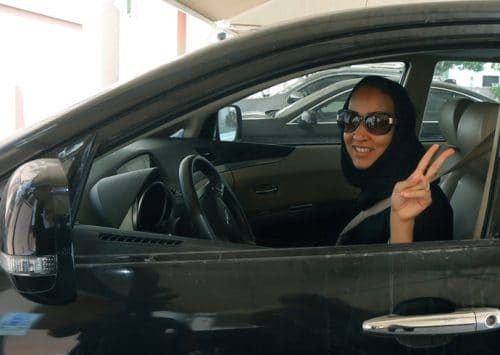 MARWAN NAAMANI ©AFP
"Ignorance leads to fear, fear leads to hatred, and hatred leads to violence.
This is the equation."
IBN RUSHD/AVERROES (1126 – 1198)
We are a Dutch not for profit organisation (NGO), financed solely by individuals who share our belief in the importance of publishing and disseminating reliable, unbiased information on the Middle East & North Africa region. To represent the voice of the region’s people, we carefully echo the region’s heartbeat by offering fact-checked and therefore credible information.
Your support is greatly appreciated and helpful!
Donate