During the US presidential campaign in 2016, Democratic candidate Bernie Sanders explained his past opposition to the 1991 Gulf War and current objections to expanded US involvement in Syria and Iraq by saying that Americans need other nations to help shoulder the peace burden.

“Saudi Arabia has the third-largest military budget in the entire world,” he said. “They’re going to have to get in and take on the Islamic State as well as other countries in that region.”

He was a bit off. Saudi Arabia fell from third to fourth place in military spending in 2016, largely due to government belt tightening following a fall in oil prices. Still, Saudi Arabia’s $61.4 billion outlay, for a nation of 31.5 million residents, puts it on a par per capita with the US, which spent ten times as much but also has ten times the population.

The Saudis’ latest spending spree – a nearly $110 billion arms deal with the US – was announced by the White House on 20 May 2017. The deal was timed to coincide with Donald Trump’s visit to the kingdom, his first foreign trip as president. Saudi Arabia must buy almost all of its weapons because it produces just 2 per cent of its equipment domestically.

The question in many people’s minds may be exactly why Saudi Arabia needs such a large defence budget. More critically, does being a big spender equip Saudi Arabia to defend itself in a region beset by conflict? Or can Saudi Arabia do it only with the help of allies?

Threats from North and South

By some measures, Saudi Arabia has one of the best-equipped and modern militaries in the Middle East. A 2014 ranking by Business Insider named Saudi Arabia as the region’s third most powerful military, behind Israel and Turkey, based on capabilities and hardware. Based solely on arsenal, Saudi Arabia ranked second, and it may soon overtake Israel in that category.

Yet for all the billions of dollars spent on weapons, “the Saudi army has mostly functioned as a parade ground military,” contends Firas Maksad, an adjunct professor and an expert on US foreign policy and the Middle East at George Washington University in Washington, DC. The Saudi military has limited combat experience and was created mostly to “protect the regime and show prestige”, he said.

The Saudi army saw its first action in 2015 in Yemen, which shares a 1,800km border with the kingdom to the south. Yemen is embroiled in a conflict between Houthi rebels, which are allied with forces loyal to the former Yemeni President Ali Abdallah Saleh, and forces loyal to his successor, Abdrabbuh Mansur Hadi. In March 2015, Saudi Arabia led a multinational intervention on the side of the current government. Two years after the launch of Operation Decisive Storm, the fighting in Yemen grinds on, with little progress on either side.

Maksad said Saudi Arabia was forced into the war to contain Iran’s influence in its backyard. Iran, which sits across the Persian Gulf from Saudi Arabia, is backing the Houthis.

The battles in Yemen “have proven to be a very steep learning curve”, Maksad said. “Nothing forces a soldier to learn until someone starts shooting at him.”

Saudi Arabia fears both Tehran’s financing of and growing influence over various sectarian militias in the region, as well as the threat of Iran becoming a nuclear power. What’s more, the Saudi-Yemeni border has always been a site of unrest between the two nations and a passageway for smuggling drugs, weapons and illegal immigrants.

The desert in Saudi Arabia’s north shares a border with another major conflict zone, Iraq. Iraq’s Sunni and Shiite Muslims have been at war for more than a decade. More recently, the Islamic State (ISIS) occupied much of Western Iraq, prompting Saudi Arabia in 2014 to begin building a fence along its border to keep out ISIS militants.

Saudi Arabia has not articulated a clear-cut defence strategy. Yet it seems to have adopted a two-war strategy long followed by the US until recently, which was to be prepared to fight two conventional wars simultaneously.

As part of that strategy, the Saudis have always felt the need to maintain close ties with Pakistan. Historically, Pakistan has been the kingdom’s closest Muslim ally.

The two countries’ ties have been built on common security interests dating back to the 1970s, when the Saudi oil boom employed a large number of Pakistanis. The Saudis view Pakistan, the only nuclear Muslim nation, as an effective counterweight to growing Iranian influence.

Saudi Arabia has sometimes nurtured that close alliance at the risk of alienating another close ally, the US. For instance, Riyadh reportedly helped bankroll Pakistan’s nuclear weapons programme and offered Islamabad $2 billion worth of free crude oil after the US imposed nuclear sanctions on Pakistan in 1998. It is widely assumed that, if Saudi Arabia were ever to pursue a nuclear weapons programme of its own, a grateful Pakistan would help the Saudis to achieve it.

Yet such is the complexity of geopolitical alliances in the Middle East that when Saudi Arabia launched its military intervention in Yemen, the Pakistani parliament adopted a resolution not to join the Saudi-led coalition. In March 2017, a Pakistani senior security source told the news website Middle East Eye that the Pakistani army will be sending a brigade of combat troops to Saudi Arabia’s southern border to help shield the kingdom from reprisal attacks mounted by the Houthis. However, it remains unclear whether these troops were ever dispatched. 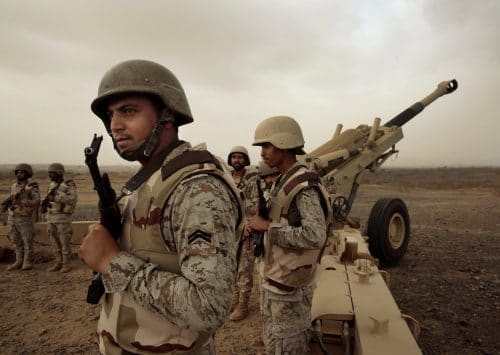 Saudi Arabia’s War in Yemen: Purchasing Power Does Not Equal Military Power
What was proclaimed as a quick and decisive show of military superiority has turned into a show of weakness. All in all,...