In May 2015, two mosques in Saudi Arabia’s Eastern Province, home to most of the Kingdom’s minority Shia population, were rocked by bomb blasts. In the first in a village in Qatif, 21 worshippers were killed and many more were injured when a suicide bomber blew himself up during Friday prayers, traditionally the time when the congregation is largest. According to one of the survivors, a man joined the congregation and detonated explosives hidden under his clothes as people were getting ready to offer prayers. About 150 worshippers were in the mosque at the time of explosion.

Exactly a week later and again in the Eastern Province, security authorities foiled another attempt to target worshippers during Friday prayers. Police became suspicious when a vehicle parked close to the al-Anoud mosque in the populous city of Damman. When they approached the vehicle, the driver detonated a bomb, killing himself and three others. The mosque was again frequented by Shia Muslims and throngs of worshippers were inside the mosque at the time. As the bomb was of high intensity and tailor made to create mayhem in a closed space, it was fortunate that the explosion happened just outside.

An eyewitness, Muhammad, said that he was inside the mosque that held approximately 5,000 worshippers. “It was around noon and the sermon was in progress when we heard a loud explosion, shaking all those present. Imam Sheikh Ali Nasser urged worshippers to maintain calm and proclaim Allah-O-Akbar [God is the Greatest]. Inside the mosque, the prayers continued peacefully and after the prayers, the security forces led the worshippers out under their security and supervision.” Both blasts were claimed by the Sunni extremist group Islamic State (IS).

In his weekly sermon, the Grand Mufti, Saudi Arabia’s highest Sunni religious figure, condemned the attack as an attempt to divide the country. “We must understand that our country’s enemies want to corrupt and break up the Saudi nation,” he said, adding that Saudis must stand together and not be deceived by the schemes of the enemy. He called the attacks a “shameful plot”, noting the importance of cooperation among the country’s residents and calling on them not to harbour terrorists “who are bent upon destabilizing the Kingdom”.

Following the two incidents, the country’s security authorities increased their presence at more than 94,000 mosques. The Ministry of Islamic Affairs, the body that regulates activities in places of worship, stated that it had joined forces with security agencies to protect worshippers at all mosques. A ministry spokesman said that “we have adopted new mechanisms for the protection of worshippers” but did not elaborate on what these were.

A spokesman for the Interior Ministry acknowledged the collaboration between the Islamic Affairs Ministry and the Public Security department, adding that his ministry intended to “double the number of patrol police during the coming holy month of Ramadan when worshippers to mosques increase tenfold. We have intensive security measures in place around mosques following the attack on the mosque in Qatif.” These measures call for security officers to be deployed to monitor activities around mosques during Friday prayers and, for their own safety, “people will not be allowed to pray in the courtyards”.

In the days that followed, the Interior Ministry made public the names of 16 individuals suspected of being involved the attacks. All were members of Sunni tribes. Citizens and residents were urged to pass to authorities any information about terror suspects or cells, with promises of rewards ranging from $300,000 to $2 million.

A month later, during Ramadan, a suicide bomber struck a mosque in the Kuwaiti capital, killing 26 worshippers and wounding more than 200 others. The modus operandi was similar to the previous bombings in neighbouring Saudi Arabia. Worshippers had gathered for Friday prayers at the Imam al-Sadeq mosque in Kuwait City, when a powerful blast ripped through the courtyard of the heavily congested building. The mosque is patronized by Shia Muslims. The cleric leading the prayers, Abdullah al-Mazeedi, told the national news agency that “the bombing targeted the rear rows of worshippers who numbered around 2,000. In addition to the victims, the blast damaged the interior and caused several chandeliers to fall.”

Investigations later identified the bomber as a Saudi. The bearded man had flown into Kuwait from Riyadh at dawn that day, hours before sewing death and destruction among the faithful. He had stayed at a house owned by a fundamentalist who subscribed to “extremist and deviant ideology” and was then driven to the mosque by an illegal resident to carry out his macabre plan.
The ruling emir, government, parliamentary and political groups and clerics all chorused that the attack on the Shia mosque was meant to stir up sectarian strife in the emirate. Describing the attack as one of “black terror”, a statement said that “the objectives of the criminal act have failed. We want to deliver a message to Daesh [IS] that we are united brothers among the Sunnis and Shiites, and they cannot divide us.”

With IS focused on establishing an Islamic state in Iraq and Syria, it would be presumptuous to assume that all such terrorist acts have their origins with the extremist group. Stoking sectarian divisions has been going on for some time in Saudi Arabia, with hardline clerics regularly denouncing Shias as heretics and infidels during their weekly sermons. Some of those lessons have clearly been learned and too well. It is only recently, however, that the dangers of this language of hate have been exposed. 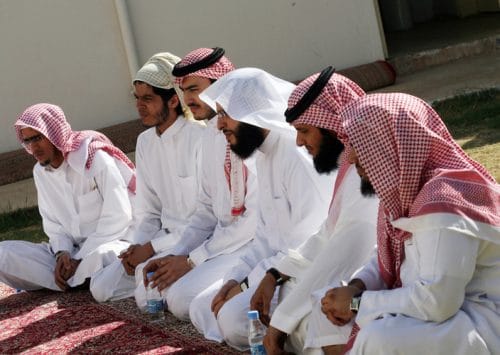 HASAN JAMALI ©Hollandse Hoogte
HASAN JAMALI ©Hollandse Hoogte
"Ignorance leads to fear, fear leads to hatred, and hatred leads to violence.
This is the equation."
IBN RUSHD/AVERROES (1126 – 1198)
We are a Dutch not for profit organisation (NGO), financed solely by individuals who share our belief in the importance of publishing and disseminating reliable, unbiased information on the Middle East & North Africa region. To represent the voice of the region’s people, we carefully echo the region’s heartbeat by offering fact-checked and therefore credible information.
Your support is greatly appreciated and helpful!
Donate