Saudi Arabia Expanding its Media Dominance Beyond the Middle East

In July 2017, prominent Saudi investor Sultan Muhammad Abuljadayel purchased a stake worth between 25 per cent and 50 per cent in Independent Digital News and Media, which is the holding company of the British daily The Independent. At the time, there were concerns that Abuljadayel’s stake would compromise The Independent’s editorial line, but a spokesperson for the newspaper assured The Guardian that The Independent’s editorial line had been “formally protected” by a new agreement between the company’s shareholders. However, journalists and critics are raising concerns once again since The Independent proudly allied with a media group that is closely affiliated with the Saudi royal family on 19 July 2018.

This partnership began publishing four branded The Independent sites in Arabic, Persian, Urdu and Turkish at the beginning of 2019. However, the content on these sites risks deviating away from the liberal values that the English paper has long championed.

Almost all the content on these platforms will be produced by Saudi Research and Marketing Group (SRMG) journalists based in London, Islamabad, Istanbul and New York. Some content on the English language website will also be translated.

Prince Bader bin Abdullah bin Mohammed bin Farhan al Saud, who is the culture minister in the kingdom, is the chairman of SRMG and first made headlines when he purchased a Leonardo da Vinci painting of Jesus Christ for $450 million.

The Independent has promised that all editorial practices will reflect global standards and hopes to foster debate among new audiences. But critics are weary, fearing that the new platforms will be used to propagate Saudi positions across the region. Such concerns are valid, considering that Reporters Without Borders ranks Saudi Arabia 169 out of 180 countries on the World Press Freedom Index. The press freedom group has also concluded that the kingdom has no independent media and that censorship is extremely high.

The Independent isn’t the first major outlet to ally with SRMG. In 2017, Bloomberg joined forces with the media company, citing the move as a logical step to help the kingdom realize its ambitious Vision 2030.

“The transformation as articulated by the Saudi leadership is an exciting story and Bloomberg would like to play a role by being an independent, unbiased information provider in the region,” said Justin Smith, Chief Executive Officer of Bloomberg Media Group.

Smith also said that Bloomberg shares the same principles as the policymakers spearheading Vision 2030, including the belief in free markets, transparency, progress and modernity.

Smith may have wanted to retract his statements following the gruesome murder of Washington Post columnist Jamal Khashoggi inside the Saudi consulate in Istanbul. That incident exposed the lengths that the kingdom’s crown prince, Mohammad bin Salam (MBS), is willing to go to in order to silence journalists.

In fact, any person who publishes even the mildest criticism of the kingdom on social media risks reprisal from the state. In September 2018, Saudi Arabia passed a law criminalizing online satire, making such expressions punishable with up to five years of jail time and an $800,000 fine.

Article 6 of the country’s anti-cybercrime law outlaws the “production, preparation, transmission or storage of material impinging on public order, religious values, public morals and privacy,” on the internet. That was the pretext for banning an episode of the show Patriot Act from the kingdom’s Netflix stream. 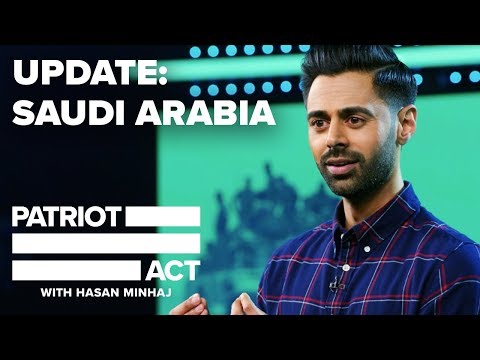 In the episode, comedian Hasan Minhaj, who headlines the show, condemns MBS and anyone who does business with the crown prince. “There are people in Saudi Arabia fighting for true reform, but MBS is not one of them,” Minhaj says in the episode.

“It took the killing of a Washington Post journalist for everyone to go, oh, I guess he’s really not a reformer,” the comedian goes on to say.

After the episode was banned, Minhaj poked more fun at the Saudi authorities. He said that the Saudis helped spark worldwide interest in his show and that the ban was useless, since his episode can still be watched on YouTube inside the kingdom.

Despite the jokes, Minhaj told The Atlantic that he discussed the possible repercussions of criticizing Saudi Arabia with his family and now admits that he lives in fear of the Saudi regime.

Meanwhile, Netflix responded to criticism for pulling the episode, arguing that it strongly supports artistic freedom worldwide and only removed the episode in Saudi Arabia following a legal demand from the kingdom.

The explanation didn’t appease Karen Attiah, who is the Washington Post’s opinion editor and was a close friend of Khashoggi. When she heard the news, she tweeted that it was “quite outrageous that Netflix has pulled one of [Minhaj’s] episodes critical of Saudi Arabia.”

Rights groups also expressed concern: Samah Hadid, the Middle East director of campaigns at Amnesty International, said in a statement that Saudi Arabia’s use of the anti-cybercrime law to prohibit the critical episode from airing came as no surprise. The kingdom, after all, has been brutally cracking down on dissent since MBS was appointed Crown Prince in June 2017.

“The authorities have previously used anti-cybercrime laws to silence dissidents, creating an environment of fear for those who dare to speak up in Saudi Arabia,” said Hadid.

“By bowing to the Saudi authorities’ demands, Netflix is in danger of facilitating the kingdom’s zero-tolerance policy with regard to freedom of expression and assisting those authorities in denying people’s right to freely access information.”

Saudi Arabia Culture International Affairs Politics
You may also like