In 2012, Saudi Arabia’s public education system included 24 universities and some 25,000 schools, as well as many colleges and other institutions. The system is open to all citizens and provides students with free education, books, and health services.

While the study of Islam remains at its core, the modern Saudi educational system also provides instruction in the arts and sciences. The Ministry of Education sets overall standards and oversees special education for the handicapped. They also decide which textbooks are allowed. The Saudi Ministry of Education has banned several books from school libraries, including works by Sayyid Qutb, an Egyptian writer who was the leading intellectual of the Muslim Brotherhood in the 1950s and 1960s. This has been justified as part of the country’s effort to prevent youths from joining radical Islamist networks.

The overall literacy rate (counting persons over fifteen years of age who can read and write) was 86.6 percent in 2010 (90.4 percent for males, 81.3 percent for females). General education in the kingdom consists of kindergarten, six years of primary school, and three years each of intermediate and high school. After elementary and intermediate school, students can choose to attend a high school with programmes in commerce, the arts and sciences, or vocational training. In high school, students take comprehensive exams twice a year, under the supervision of the Ministry of Education.

Saudi students can now obtain degrees in almost any field in the kingdom. The five major universities in the kingdom are the abovementioned King Saud (the oldest university in the country), King Abdulaziz (the largest, with over 42,000 students), King Faisal, Imam Muhammad ibn Saud Islamic University, and Umm al-Qura.

The kingdom established a large number of adult education centres in order to make education available to a broader group and to eliminate illiteracy. For people living in isolated rural areas, the government conducts intensive three-month adult-education courses during the summer.

The kingdom has established a number of educational institutions throughout the world for Saudi students living abroad. The three largest such institutions are located in the United States, Great Britain, and Germany.

Teaching is still oriented toward rote learning, and Arabic and Islamic studies have a dominant position in the curricula. Teaching reform has been discussed for several years, but results on the ground are still limited, as teachers’ qualification remains an issue. The number of private schools has grown, and more than a dozen private universities have recently been licensed. Access to quality education for the less affluent, however, remains a problem. As in other Arab countries, research and development spending in Saudi Arabia is still very low; ARAMCO and state heavy-industry giant SABIC are the only entities engaging in significant research. With the exception of the small King Fahd University of Petroleum and Minerals, public universities are of low quality. Awareness of all these issues has risen significantly, however. 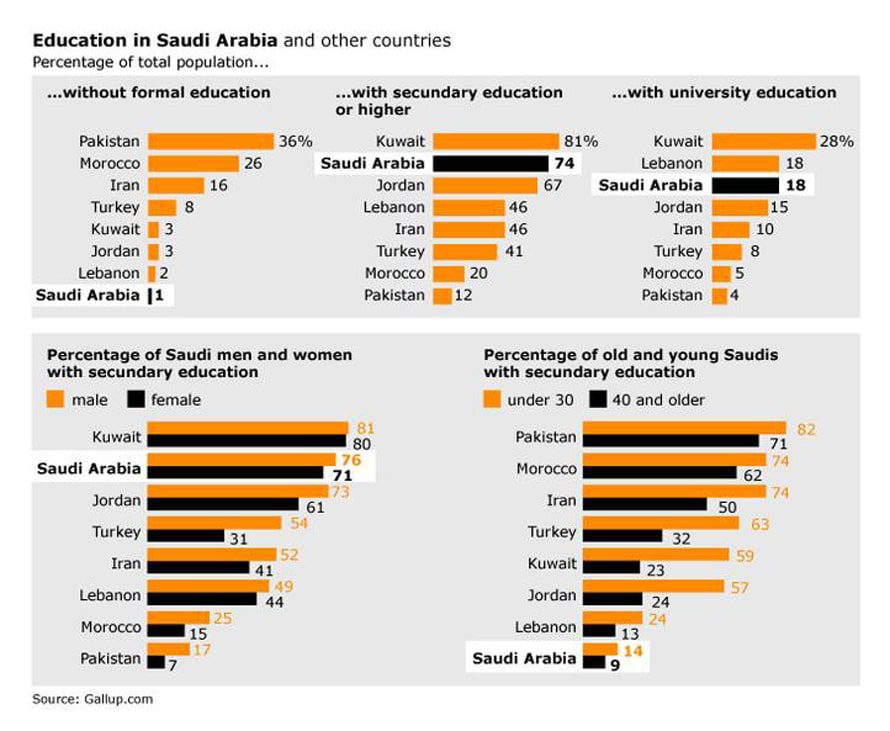