On January 14, 2021, Tunisia celebrated 10 years of revolution, but this is not the time for celebration. Indeed, the government has declared four days of total confinement, a hazardous decision, justified by the pandemic, but which aims essentially to stifle any possible public demonstration.

In fact, ten years after the revolution, the political system is mired in squabbling between the president, prime minister and the parliament as the economy stagnates.

While some Tunisians believe in the fruits of the uprising, others have decried a perceived erosion of the freedoms that democracy secured.

For some, the febrile climate has recalled the political polarisation after a suspected hardliner assassinated secular activist and lawyer Chokri Belaid in February 2013. His death triggered a wave of protests in Tunisia that led to a grand bargain between the main Islamist and secular political parties to stop the country sinking into violence.

Unfortunately, health measures are a priority at the moment and Tunisia, like everyone else, is still at war with the covid-19.

What is the current health situation in Tunisia?

In December 2019, while Wuhan was on everyone’s lips, the local media announced it as an isolated fact and no one saw this crisis affect us in Africa. And yet, on March 2, 2020, Tunisia confirmed its first case, with the victim being a 40-year-old Tunisian man from Gafsa returning from Italy.

BETWEEN FEAR AND HESITATION

On March 2020, following a National Security Council chaired by President Kaïs Said, measures were announced: the limitation of transportation with Italy and the suspension of courses in all schools and universities, the closure of cafes, restaurants and discos, the suspension of collective prayers and the cancellation of congresses and cultural events. Sports competitions are to be held behind closed doors. Maritime borders are closed and air links with Italy are interrupted and limited to France, Egypt, Spain, the United Kingdom and Germany. In addition, anyone entering the territory must be isolated for 14 days.

Still not enough, cases of contamination continued to increase exponentially.

Kaïs Saïed decreed total containment, a ban on all travel between towns and a curfew throughout the country with soldiers deployed, robot-policemen patrolling the city center, the government of Saied had every intention of enforcing its authority. 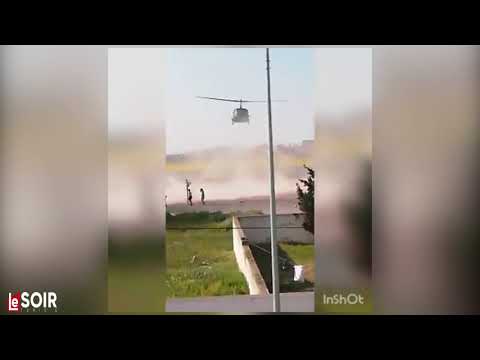 Until then, the situation seemed to be under control; Indeed, at the end of March 2020, Tunisia was one of the countries with the fewest cases of contamination and deaths compared to its North African neighbors. They even praise its management of the crisis.

No cases recorded at the beginning of May 2020: the people are ecstatic.

From there, the first of three phases of progressive deconfinement decreed by the government begins, which plans to gradually restart the economy according to the evolution of the pandemic in the country. Field hospitals and rapid tests are set up all over the country.

CALM BEFORE THE STORM

The summer arrives, anxiety falls back, Tunisians let themselves go. Sanitary measures are no longer respected. In spite of the numerous distress calls made by scientists, nothing is done about it.

As many had predicted, Tunisia is facing a more contagious and lethal winter wave. Indeed, the numbers were becoming frightening.

On October 2020, the Mechichi government announced new measures to stem the rapid spread of the virus in the country including a national curfew, the closure of cafes and restaurants at 4 pm, the suspension of all private and public activities and gatherings, the suspension of classes in schools, colleges, high schools and universities and the suspension of prayers in mosques.

The Ministry of Health decided on January to impose a general four-day containment to limit the spread of the pandemic, which reached record levels, resulting in a “very dangerous” situation.

Tunisians were warned of the pandemic from the very beginning. The world’s biggest powers were unable to manage the crisis. So what could Tunisia do better?

The WHO (world heath organization) estimated the hospitalization rate due to COVID-19 infections at 20%, which amounts to 5% according to the Tunisian authorities.

The key issue of this pandemic is the ability of health systems to sustain themselves and cope with a large influx of patients at the same time. In general, patients hospitalized due to COVID-19 tend to require intensive care respiratory assistance. Therefore, the availability of medical equipment such as respirators and ventilators is also a concern, as intensive care units may be quickly overwhelmed.

The Ministry of Health has not provided exact figures on the capacity of facilities in Tunisia. Various statements by officials – including Health Minister Abdellatif Mekki – to the media refer to 1,000 equipped intensive care beds between the public and private sectors. It should be noted that not all of these beds are reserved for COVID-19 patients.

This estimated figure may also be subject to change as authorities have stated that the capacity of hospitals and other centers dedicated to the treatment of cases could be increased. The available data also show significant disparities within the country’s public services, particularly with regard to the regional distribution of intensive care equipment and beds.

This disparity and the state of the hospitals is worrying. Tunisians are mobilizing and a wave of solidarity is being created.

In addition to foreign financial and material donations, Tunisians and those abroad are multiplying donations.

Public Health Minister Abdellatif Mekki announced that the value of donations from citizens in support of the fight against coronavirus amounts to 250 million Tunisian dinars ($92 million). Despite the good start, the figures today are alarming. Tunisia is overwhelmed by the crisis. Hospitalization services are saturated. The health system is collapsing.

It is a country that is struggling economically and is in the process of getting back on its feet, that is facing an economic crisis, which is universal, but which comes at the worst of times for the small Mediterranean country.

Between strikes, phosphate production stoppage, desertion of foreign investors and falling tourism, Tunisia is nevertheless redoubling its efforts to grow its assets.

Elyes Fakhfakh, former Prime minister announced to the Tunisian Television a plan of economic revival. The State had to release three billion dinars (about one billion euros) to finance a plan to support businesses and the poorest. However, these measures would be insufficient, especially for the poor and the workers in the informal sector who cannot stop working from one day to the next. In some cities, despite the establishment of the confinement, residents are demonstrating against the authorities to denounce the lack of food. The Minister of Tourism, Mohamed Ali Toumi announced that a credit line of 500 million dinars ($184 million) has been set up to enable hotel establishments to pay the salaries of their employees.

The fine words and good will are there, but the figures do not lie

According to the Central Bank of Tunis, the losses of one of the most important sectors for the Tunisian economy, namely tourism, exceed 4 billion Tunisian dinars ($1475 million).

The Minister of Finance, Nizar Yaïche, stated that 2390 companies are affected by the crisis of Covid-19.

Now, according to a study, 430000 jobs were temporarily lost during the coronavirus crisis. The same study indicated that the crisis is expected to cause a 46.4% decline in Tunisian GDP during the second quarter of 2020.

The deterioration of the economic situation has also resulted in an increase in illegal migration: 7890 irregular Tunisian migrants would have reached the Italian coast from January to the end of August 2020, against 1347 during the same period in 2019. Social conflicts over access to water, employment, and the payment of wages are increasing. According to Yaïche, the impact of the pandemic on public finances is estimated at five billion Tunisian dinars.

Despite its limited resources, Tunisia has become an example in the MENA region through its management of the crisis. It is a country in a transition phase yet has succeeded to limit the damage.