On a cold December day in 2017, 31-year-old Vida Movahed stood on a telecom box on Tehran’s ‘Revolution Street’ and started silently waving her headscarf above her unveiled head. The photos of this symbolic act of defiance soon went viral, inspiring other women to do the same and reigniting the debate on compulsory hijab in the Islamic Republic. Although Movahed creatively captured public attention on the issue, for decades Iranian women have defied the religious restrictions by refusing to implement the ‘proper’ Islamic dress code. Today, the regime has largely lost the cultural war, and without using the mechanisms of social control, it will probably be unable to maintain one of the main pillars of the republic, which is mandatory hijab.

Browsing through old photos of the Iranian Revolution in 1979, it becomes obvious that women played an important role in bringing down the previous regime. Like men, the women who participated came from different backgrounds and expected different results from the revolution. However, many of them fought for political liberty and democracy. Although before the revolution Supreme Leader Ayatollah Khomeini did not make any references to compulsory hijab, four years after the establishment of the Islamic Republic, he decreed mandatory Islamic dress code for women. 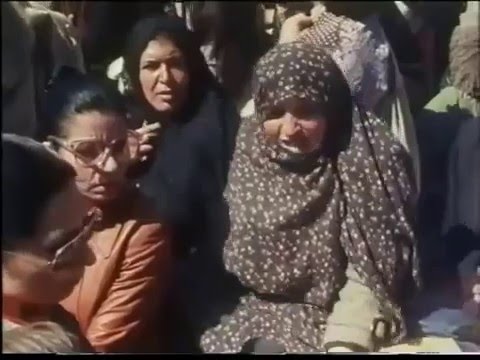 This paved the way for the first public act of defiance. Women took to the streets to protest against the new law. One of the defining slogans of that protest was ‘we have not revolted to go backwards’. The videos of the protest show that even some women in hijab took part because they saw the law as a regressive act against all women. Although this initial protest was suppressed by the recently empowered Islamist forces, women continued to defy the dress code through passive resistance.

As a result, revolutionary ‘committees’ were created to patrol the streets and ensure compliance. There is no reliable data on the number of arrests, but certainly, in the first decade many women were arrested and persecuted either for displaying their hair in public or dressing ‘inappropriately’. Although the rules were relaxed slightly under President Rafsanjani, the ‘morality police’ continued to clamp down on any sign of public nonconformity. Even so, year after year, new fashion trends emerged, which allowed women to express their individuality while the state actively tried to limit the scope.

Since 1997, the question of social freedom has become an important election issue. Promising greater individual freedoms to youths was instrumental in Mohammad Khatami’s two landslide victories in 1997 and 2001. His electoral mandate mobilized a large section of the youth population who were otherwise politically apathetic. Yet even though social and cultural freedom increased, the morality police continued to operate.

During the 2005 election, which was won by Mahmoud Ahmadinejad, the question of social freedom and the state’s interference in lifestyle choices re-emerged as an important issue. Even Ahmadinejad recognized the mobilizing nature of promising greater personal freedom. He also pledged to loosen state control over personal affairs. In one of his pre-election television interviews, he questioned the role of the morality police, saying, “Let our children arrange their hair any way they wish. It does not concern you and me … the government should fix the economy of the nation and improve its atmosphere … people have varied tastes.” Despite his pledge, once in office, the crackdown on so-called ‘un-Islamic’ behaviour intensified. He denied responsibility, blaming different factions in the government for empowering the morality police to undermine his popularity.

Not surprisingly, the current president, Hassan Rouhani, also used personal freedom to boost both his electoral campaigns. Although personal freedom has considerably increased under him, women are still subject to the compulsory hijab. However, as Movahed reignited this sensitive public debate, Rouhani promptly reacted by releasing a three-year-old report showing that nearly half of Iranians want an end to the hijab requirement. This is happening exactly at the time that hardliners in the judiciary have warned about punitive consequences for people who publicly defy the dress code. So far, at least 29 people have been arrested.

It may be the case that Rouhani’s government along with his moderate and reformist supporters are genuinely in favour of greater social freedom, but at the same time, one cannot completely ignore Iranian factional politics. Some cynics argue that the publication of the old report was nothing more than an opportunism to boost Rouhani’s own popularity. Although one cannot be fully certain, there are probably elements of the two.

In recent years, in many cities, headscarves have become more of a fashion accessory than a sign of modesty. There are clear signs of secularization in Iranian society. Ironically, under the Islamic Republic, the role of religion in shaping collective consciousness has rapidly decreased. The state is aware of this but has been unable to prevent the shift.

Nonetheless, hijab is more than a lifestyle choice, it is also an important part of the Islamic Republic’s identity. Although one of republic’s mandates was the preservation of public morality, its track record has been poor. In recent years, even the hardliners have acknowledged the widespread corruption blighting the country. This has also paved the way for a rise in other social ills that are considered ‘un-Islamic’. The state has not been able resolve the problem because it is part it. As the regime is perceived as being unable to halt the decline of public morality, hijab remains the last Islamization policy of the revolution that the hardliners are not prepared to abandon.

Although the moderates and reformists are more open to change within a controlled environment, the hardliners see the disappearance of hijab as symbolic of the loss of their own power. Hence, hijab has become both a cultural war between the state and its citizens and a power play at the very heart of the political establishment. Indeed, by removing her headscarf in public, the ‘Girl from Revolution Street’ has not only become the latest symbol of this ongoing cultural war but has also underscored the increasing friction within Iranian factional politics.