Gulf nations are hosting and endorsing Israeli athletes, officials and leaders, signaling a clear push to establish diplomatic relations. However, the recent overtures are generating a controversy in the Arab world and beyond.

This was clear when the Israeli flag was displayed at the 48th World Artistic Gymnastics World Championships in Qatar, drawing the ire of many Qataris. Before the nine-day competition commenced on 25 October 2018, social media exploded with criticism of Qatar’s perceived normalization with Israel.

Arab residents in Qatar, and Qataris themselves, mobilized on Twitter to ridicule the hashtag #GoGymtastic by starting the hashtag #GoNormalization. The president of the Qatari Gymnastics Federation Ali Al-Hitmi nevertheless defended his decision to invite Israel to the event. He stated on the state-sponsored network AJ+ that Qatar’s organizing committee was adhering to international standards by inviting Israel to the event.

The explanation didn’t quell the anger, however, and the possibility that Israel could earn a medal in the competition – resulting in the hoisting of the Israeli flag twice in the same event – compounded the uproar.

Many Qataris feared the success of Israeli gymnast Artem Dolgopyat, who had won a silver medal during a floor exercise the previous year. Dolgopyat is part of the Israeli army and had booked his ticket to Doha at the last minute. Israeli athletes Andrey Medvedev and Alexander Shatilov were also predicted to do well.

Days before the tournament, Shatilov said, “I’m hungry for the medals, especially in such a competition. I’ll do everything I need to get onto the medal podium.”

Despite his motivation, nobody from Israel won any medals, allowing Qatar to avoid an awkward award ceremony. The Israeli delegation nonetheless said that it was welcomed at the tournament and pleased to have displayed its national emblems. “We were very well received and we’re happy with the hospitality,” said Jacki Vishnia, the manager of the Israeli delegation.

Israeli athletes also displayed their national symbols at a Judo tournament in Abu Dhabi last month. The Israeli anthem even played twice: once at the beginning of the tournament, and again after Israeli Peter Paltchik won gold in the under 100kg category.

After the final event, Israel’s Culture and Sports minister Miri Regev wept and said that the entire message in Abu Dhabi was one of “unity and peace.” During the tournament, Regev visited the UAE’s largest mosque, the Sheikh Zayed Mosque. She told reporters that she signed the mosque’s guestbook in Hebrew to demonstrate the “brotherhood that could be between Jews and Muslims.”

Many Arabs didn’t express the same hope. Abdulkhaleq Abdulla, a political analyst based in the UAE, told The Washington Post it was terrible to see Regev – a person he describes as hating Arabs – visiting the UAE. “Hearing the Israeli national anthem played only added to the insult,” he said.

Despite the sentiments of their populations, the UAE and Qatar are clearly competing to become the sports hub of the Middle East and to establish closer ties with Israel.

The tiny emirate of Qatar – currently blockaded by the UAE, Saudi Arabia, Egypt and Bahrain – desperately needs friends. The country has hosted sporting events as a form of soft power, helping it break its isolation and build relationships with the international community, including Israel.

“While Qatar is in the midst of this crisis with its neighbors, being open to Israelis can earn it a lot of points with the American [Trump] administration,” Dr. Yoel Guzansky, a senior researcher at Tel Aviv’s Institute for National Security Studies, told Haaretz.

The UAE has different motives, warming up to Israel in a bid to form a broader alliance against their mutual enemy, Iran. Bilateral trade is also a major factor, writes Sigurd Neubauer, who is a Gulf analyst based in Washington, D.C. He notes that Israeli companies reportedly sell national security technologies to the UAE, which is a police state that closely monitors and represses any form of political activism. Israelis also profit from Dubai’s diamond market and are also heavily invested in real estate, which they can purchase with their second passports.

The Sultanate of Oman has also made an overture to Israel. On 26 October 2018, Israeli Prime Minister Benjamin Netanyahu visited Sultan Qaboos bin Said in the Omani capital of Muscat. The Prime Minister’s office told reporters that the two leaders discussed ways to achieve “peace and stability in the Middle East.” Oman, after all, has long had a reputation for being a peacemaker in the region.

“The visit is a significant step in implementing the policy outlined by Prime Minister Netanyahu on deepening relations with the states of the region while leveraging Israel’s advantages in security, technology and economic matters,” his office announced.

Despite Israel’s optimism, peace and stability won’t be achieved easily without an end to the occupation of the West Bank and Gaza and until a just solution is found for Palestinian refugees.

That was clear from the anger that Netanyahu’s visit to Oman generated among Palestinian officials. Munir al-Jaghoub, a senior official in the Palestinian Authority, said that Netanyahu’s visit to Oman effectively kills the Arab Peace Initiative (API), which was proposed by Saudi Arabia in 2002 as a means to resolving the long-standing Arab-Israeli conflict. The API proposes that Arab states normalize ties with Israel in exchange for the latter’s complete withdrawal from the West Bank and Gaza.

Hamas also criticized Oman for hosting Netanyahu. The group called on Arab countries to double down on its boycott of Israel, which “threatens Palestine and the entire region.”

A just peace between Israel and Palestine is clearly elusive. That was most indicative when violence erupted in Gaza just weeks after the gymnastics tournament in Qatar. Israel botched an assassination attempt against a top Hamas figure, leading to an exchange of fire between the two sides.

Days after the attack, Hamas retaliated by firing hundreds of missiles into Israel, injuring 10. The Israeli military dispatched fighter jets to hit what it claimed to be terrorist targets. But civilians in Gaza, who are already trapped in a humanitarian catastrophe, paid a heavy price – as is often the case when the two sides clash.

The violence didn’t seem to bother Gulf states. Qatar, for one, may have been relieved that the clashes erupted after the gymnastics tournament, rather than before. “Qatar can always say, ‘it’s an international event; it’s not that we want to host the Israelis, but we’re part of the international community,’” argues Dr. Guzansky. “It would be much harder for Qatar to do that in the event of a conflict escalation [in Gaza].” 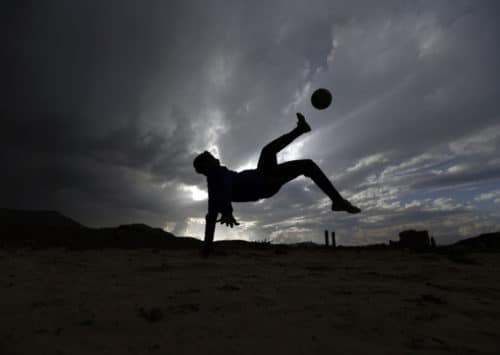 Qatar
Qatar
Qatar has one of the largest reserves of oil and natural gas in the world. It employs large numbers of foreign workers i...