Located in north-eastern Africa, the Republic of Sudan has a total area of 1.9 million square kilometres. It is bordered by Egypt to the north, Libya to the north-west, Chad to the west, the Central African Republic to the south-west, South Sudan to the south, Ethiopia to the south-east and the Red Sea to the east. The population in July 2015 was an estimated 36.1 million people.

The Nile is Sudan’s most prominent topographical feature and the country’s primary source of water. It has two major tributaries: the White Nile, which originates in the Great Lakes
region of central Africa, and the Blue Nile, which begins in the Ethiopian Highlands. The two tributaries meet at the capital Khartoum, from where the river is called the Nile as it continues northwards into Egypt. The White Nile gets its name from whitish clay that is suspended in its waters. When the Nile floods, deposits of silt act as a rich fertilizer for the soil.

Other important tributaries of the Nile are the Atbara, Dinder and Rahad. There is also a group of large seasonal wadis, including Wadi al-Malik, Wadi Hawr, Wadi al-Magadam and Wadi Azoum in the west, and Wadi Khor Baraka and Wadi al-Gash in the east. Several other wadis flow from the Red Sea Hills westwards into the interior and, conversely, from the west towards the sea.

The vast plains in central Sudan are bordered on three sides by mountains: the Red Sea Hills to the north, the Marrah Mountains to the west and the Didinga Hills to the east. The Red Sea Hills represent the western edge of the Great African Rift Valley, which stretches from East Africa across the Red Sea to the Jordan River Valley and the Sea of Galilee in Israel. The volcanic highlands of the Marrah Mountains rise out of the Darfur Plateau to elevations of
between 900 and 3,000 metres above sea level. In south-central Sudan, rugged granite hills rise sharply from a wide clay plain, the largest group of which forms the Nuba Mountains.

Sudan’s landscape is characterized by isolated mountains and hills that rise up suddenly from deserts and clay plains. These are mostly the remnants of igneous or sedimentary rocks from different geological eras that withstood erosion.

The oldest geological formations belong to the Precambrian period, represented by basement rocks, and cover most of the eastern, western, central and southern regions. Dating from the first and second geological era, especially the Cretaceous period, are the Nubian sandstones that cover vast areas of the northern and central regions. In the central region is the Um-Rawaba, a formation rich in groundwater that dates from the third geological era. Rock formations settled throughout the fourth geological era up to the present day.

Sudan has a tropical climate, characterized by generally high temperatures with significant seasonal and regional differences. Temperatures in the dry northern region can exceed 45 degrees Celsius and rainfall is negligible. High temperatures also occur throughout the semi-arid central plains region and humidity is generally low. The semi-wet region covers the southern parts of the country, along the border with South Sudan. The Red Sea coast has a different climate from the rest of the country, associated with the formation of Lake Nubia behind the Aswan High Dam due to the humidifying effect of the lake waters. 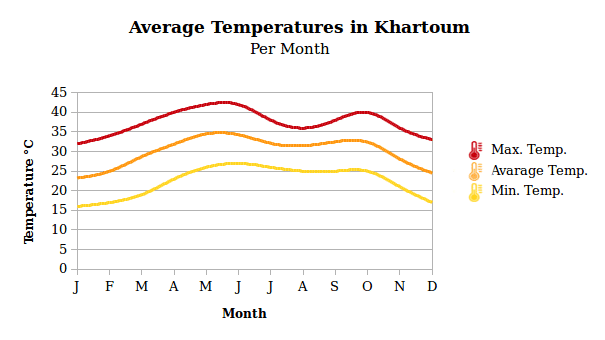 Rainfall in most parts of Sudan is linked to the Intertropical Convergence Zone (ITCZ), an area near the equator where the moist south-east trade winds meet the dry north-east trade winds between March and September. This convergence causes precipitation in the summer, except on the Red Sea coast where rain falls in the winter.

Rainfall in the central and eastern parts of the country ranges from less than 100mm north of Khartoum to 1,000mm in the far south. The eastern plains derive most of their heaviest rainfall from winds coming from the east. 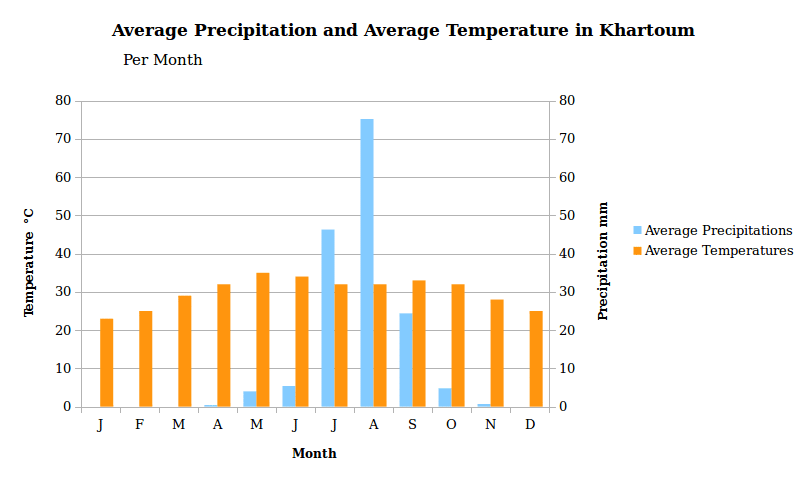 Sudan’s vegetation is closely related to the climatic zones. From the desert in the north, vegetation gradually improves through semi-arid shrubs to low woodland savannah characterized by acacia trees and short grasses. On the uplands of the southern border, rainfall is sufficient to support tropical rainforest.[/fusion_text]

The country’s soils can be divided into three categories: The soil of the dry desert zones is loose sand or a mixture of sand and gravel or rocks. A deep clay soil (black cotton soil) of river origin extends from the east westwards across most of the central region, in particular the Gezira area. A similar clay soil can be found around the Nuba Mountains. In the west, sandy soil is dominant except in the Marrah Mountain area, which is covered in rich volcanic soil.

Sudan has enormous water resources, including 1,000 billion cubic metres (BCM) of annual rainfall and 1,085BCM of Nile water, in accordance with the 1959 water-sharing agreement signed with Egypt. However, water is scarce during the dry season in areas that are not located on the river. The amount of renewable groundwater is estimated to be around 4.02BCM.

Sudan’s main nature reserves are Dindir, al-Rdom, Wadi Hawr, Diyar Mountain, Hassani Mountains, Dnguenab, Snguenib, Raya Basendh and Galabat. Dinder is considered to be the most important reserve. Covering an area of approximately 10,000 square kilometres, it is a model for a global wildlife park and a popular destination for tourists from around the world. The park is home to 27 species of large mammals, including African leopards, Masai lions and cheetahs, over 160 species of birds as well as 32 species of fish, small mammals, bats, reptiles, amphibians and ostriches.

Two thirds of northern Sudan is affected by desertification, largely as a result of decreasing rainfall, soilerosion and deforestation. In addition to natural factors, human activity is exacerbating the problem, especially overgrazing, agricultural expansion and logging. Land affected by desertification is confined to areas between latitudes 10-18 degrees north, comprising a total area of 126,000 square kilometres or roughly 51% of the country’s total area.

Other environmental issues include deteriorating water resources, periodic droughts, pollution caused by herbicide and pesticide use, loss of biodiversity and declining wildlife populations due to excessive hunting.

Sudan has high solar radiation, estimated at 5.4kWh/m²/day according to the readings of the Meteorological Authority. The average brightness period is no less than ten hours per day. The total solar energy read in some Sudan cities amounts to an average of 2.8 gigajoules/m²/year, which could be used in the electrification of rural areas.

Projects launched by the General Directorate of Energy Affairs, the Energy Research Institute and the Community Development Fund have been able to install around two megawatts (MW) of solar energy in remote rural areas. The government aims to increase that amount to around 20,000MW within the next 20 years.