Fanack Home / Sudan / Past to Present of Sudan / As Sudan Protests Continue, Russia, China, Turkey Vow Not to Abandon al-Bashir

The widespread protests against Sudan’s President Omar al-Bashir showed no signs of abating in February 2019. Now in their eighth week, the protests mark the biggest threat to the authority of the 75-year-old strongman and the Islamist movement that has supported his 30-year dictatorship.

The security services have clamped down hard, so far resulting in more than 50 deaths, according to opposition sources, and nearly 30, according to government sources. At the same time, al-Bashir is trying to garner foreign financial and political support that will enable him not only to suppress the protests but also to obtain the funds needed to overcome the economic hardships that originally sparked the protests on 19 December 2018.

During his long tenure, al-Bashir has shown himself to be capable and resourceful when it comes to playing on regional and international alliances and disputes. He appears to be using his experience in the current crisis, but it may not help him for long because the worsening economic situation and the weeks of unrest have greatly weakened him, making him an easy prey to regional rivals.

Sheikh Tamim bin Hamad al-Thani, emir of Qatar, was the first to take advantage of the situation in Sudan, calling al-Bashir on the fourth day of the demonstrations and stressing his country’s readiness to provide all possible assistance. It was therefore not surprising that Doha was al-Bashir’s first stop on a foreign tour that started on 23 January.

For al-Bashir, the visit was particularly important because it sent a message to people both inside and outside Sudan that he is reassured about the situation in his country and could travel abroad without concern. Moreover, the visit to Qatar also sent an indirect message, and perhaps a veiled threat, to Qatar’s regional rivals, namely Saudi Arabia, the United Arab Emirates (UAE) and Egypt, that Sudan can rely on the Qataris if these countries are too reluctant to help, especially with the Sudanese forces playing a pivotal role in the Saudi-led war against the Houthis in Yemen. Neither can one ignore the ideological proximity between the governments of Sudan and Qatar, both of which are Islamist and pro-Muslim Brotherhood.

Despite this apparent friendliness, the visit did not result in clear financial commitments from Qatar to support al-Bashir’s government in Khartoum, according to an AFP report. Other important signals suggested that al-Bashir’s visit will have limited results. Ali al-Qaradaghi, secretary-general of the pro-Qatar International Union of Muslim Scholars, which is on Saudi Arabia’s list of terror organizations , tweeted and called on the government of Sudan to refrain from shedding Muslim blood, respect the rights of protesters and combat corruption. It is unlikely that such a position would be issued without the blessings of the Qatari government.

The Saudi response came a day after al-Bashir returned from Doha. An urgent visit was made to Khartoum by a Saudi delegation led by the ministers of investment and transport, who conveyed a verbal message from the Saudi monarch confirming the latter’s support. Sudan’s ‘security and stability is the kingdom’s security and stability,’ the Saudi Press Agency reported.

However, observers noted that no immediate or direct Saudi aid to Sudan was announced, and that the Saudi Commerce and Investment Minister Majid al-Qasabi spoke to reporters in Khartoum at length about Saudi Arabia’s previous aid to Sudan, which amounted to 23 billion Saudi riyals ($6.1 billion), as loans for development projects, including 8 billion riyals ($2.1 billion) over the past four years.

Saudi Arabia’s inaction may be a sign of its indignation at Sudan’s flirting with the Turkish-Qatari alliance against Saudi Arabia. However, Sudan’s military support in the war in Yemen is something that Saudi Arabia cannot dispense with and, therefore, Saudi Arabia is compelled, albeit reluctantly, to turn a blind eye to Sudan’s relationship with Qatar and Turkey, as long as the war continues. The UAE, Saudi Arabia’s closest ally, has been noticeably silent about the situation in Sudan.

Saudi-owned satellite television channels such as al-Arabiyah and al-Arabiyah al-Hadath as well as the Emirati-owned satellite channels such as Sky News Arabia — all of which are widely watched in Sudan — have covered the protests extensively and with clear sympathy for the protesters’ demands. Nobody in Khartoum considers such news coverage to be independent journalism.

Al-Bashir will next visit Kuwait, which continues to distance itself from the war on Yemen, to bolster his efforts to obtain regional support. This is despite the ill will that has existed between the two countries since al-Bashir supported Iraq’s invasion of Kuwait in 1990.

On 27 December, Egyptian Foreign Minister Sameh Shoukry arrived in Khartoum with the Egyptian intelligence director on a visit that was scheduled before the outbreak of unrest. However, the Egyptian decision to complete the visit eight days after the start of the protests was regarded as implicit support for al-Bashir.

A month later, on 27 January, al-Bashir’s visit to Egypt was clearly meant to elicit support, which Cairo did not hesitate to give. Moreover, Egyptian President Abdel Fattah al-Sisi met al-Bashir at the airport, in contrast to his reception in Qatar, where he was received by the Minister of State for Foreign Affairs. Al-Bashir also had to wait for a full day in Doha before meeting the Qatari ruler. This angered al-Bashir’s supporters in Khartoum and prompted Sudanese oppositionists to mock him.

London-based newspaper al-‘Arabi al-Jadid cited diplomatic sources as saying that Cairo took advantage of al-Bashir’s weak position and imposed some of its demands on him, including that Sudan change its pro-Ethiopia position with regard to the negotiations on the Ethiopian Renaissance Dam and extradite a number of Egyptian Muslim Brotherhood leaders living in Khartoum. In addition, al-Bashir was explicitly asked to reconsider his regional relations and curb the influence of Turkey and Qatar in his country. According to the newspaper, al-Bashir accepted the demands in return for Egyptian political support. However, Egypt, which is struggling with its own economic woes, does not have much financial assistance to offer. The Egyptian government-owned newspaper al-Ahram stressed that Egypt does not interfere in Sudan’s internal affairs.

Al-Bashir admitted during the joint press conference with al-Sisi that there are attempts to replicate the Arab Spring in Sudan, adding that many organizations are seeking to destabilize the region. However, the Sudanese demonstrators did receive support from Cairo. A number of Egyptian intellectuals and researchers issued a statement of solidarity with the Sudan uprising to coincide with al-Bashir’s visit to Cairo.

Russia, China, Turkey: we will not abandon al-Bashir

Russia, which has strong economic and political interests in Sudan and a common history of hostility toward the West, renewed support for al-Bashir through its First Deputy Permanent Representative to the United Nations Dmitry Polyansky, who refused to discuss the protests in Khartoum at the United Nations Security Council. Russia also publicly defended the presence of private Russian security companies allegedly involved in training the Sudanese army, and it denied involvement in suppressing the protests.

China did the same. The country received a special Sudanese presidential envoy on 28 January. Moreover, the Sudanese Shuruq news network quoted the Chinese foreign minister as saying that the Chinese government and people support Sudan’s efforts to overcome the current situation, which he described as temporary and resolvable. China is Sudan’s largest trading partner and its most important foreign investor in the oil sector.

For its part, Turkey took a position that is consistent with its regional alliances. Jawdat Yilmaz, vice president of Turkey’s ruling Justice and Development Party, said that his country is aware of the plots being hatched against Sudan, and it will always stand by the Sudanese people and legitimate government. “Turkey has faced similar plots, and those trying to destabilize Sudan by provoking such moves will not succeed in doing so,” he said.

Limited Verbal Support from the West

Although international human rights organizations have strongly denounced the Sudanese authorities’ use of force against the protesters, most Western governments have not gone beyond issuing diplomatic statements condemning the violence. It is unfortunate for the Sudanese people that their protests have coincided with the Brexit crisis plaguing all Europeans. This is in addition to the US government shutdown that has preoccupied the United States.

However, the European Parliament in Strasbourg issued a strong statement against the repression of protesters, which included a threat to halt cooperation with Sudan. The troika (America, Canada and Norway) issued a similar statement denouncing the Sudanese authorities’ use of violence and calling for the protesters’ demands to be respected.

Sudan’s protests received some coverage in the Western press, but it was not enough to prompt the public to put pressure on their governments, which rely heavily on Khartoum to fight illegal immigration to Europe. 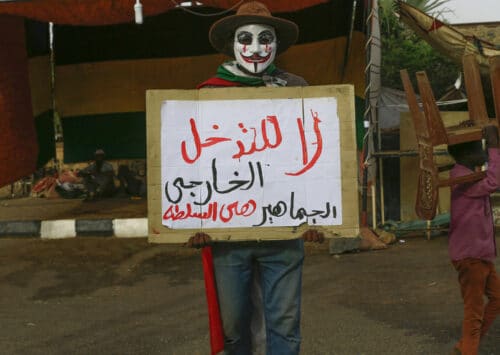 Sudanese Revolution Subject to Regional, International Interference
The Sudanese revolution fell victim to disagreements in the Arabian Gulf region, especially those between the Saudi-Emir...