Deepening disagreements between protestors and the interim military council are threatening to derail the 6 April 2019 popular revolution that culminated in the ouster of Sudanese President Omar al-Bashir and his Islamist regime after 30 years of repression and heavy-handed security policy.

The negotiations between the opposition parties that spearheaded the Declaration of Freedom and Change, representing the majority of the protest movement, and the military council that has been ruling the country since the ouster, have resulted in the establishment of ‘a civil-military sovereign council’ that is dominated by the army – seven military representatives compared to three civilians.

The parties behind the Declaration of Freedom and Change rejected the proposal and affirmed that they will not abandon the demand of the revolution to hand over full authority to a civilian government and form a civilian sovereign council with a limited military representation. The parties have also threatened to escalate the peaceful protests by resorting to new means, including political and civil disobedience.

The current unrest, which erupted in early December 2018, has reached a critical stage of political tension and increased public outrage against the backdrop of the deteriorating economic conditions. Long lines of people waiting to collect bread and fuel have become a daily sight, and people are unable to withdraw money from banks.

This has been compounded by the sharp hike in the prices of basic commodities and medicines as well as the high inflation rate, which for the first time in the country’s history has risen to 72 per cent.

By 16 December 2018, massive demonstrations were being staged in the capital Khartoum at the urging of the Sudanese Professionals Association, which mobilized the protests through social media. The protests have continued to this date and the protesters, especially the young ones, have responded to every call to protest, organizing marches along specific routes to the Republican Palace, where al-Bashir’s office is located.

The protests also spread to other Sudanese cities, including Atbara, Berber, Managil, Kusti, Ed Dueim, Rabak, Qadarif, Kassala and Port Sudan. More than 50 people have been killed and some 7,000 wounded, according to the Ministry of Health. Moreover, more than 4,000 people have been arrested and put in prison.

In an attempt to control the situation, the ousted government blocked social media websites, but the protesters used decryption programs to circumvent the block.

The protests gained momentum following the torture, sexual abuse and murder of primary school teacher Ahmed al-Khair in the city of Khashm al-Qurba by prison officers of the National Intelligence and Security Service (NISS).

The Sudanese Professionals Association signed the Declaration of Freedom and Change with a number of opposition parties who had not participated in the previous government. The document called for the ouster of al-Bashir’s regime and the appointment of a transitional government as a prelude to the restoration of democracy and the drafting of a permanent constitution.

This culminated in massive marches on 6 April after the previous march had succeeded in reaching the Republican Palace to deliver a memorandum demanding that al-Bashir step down.

The date of the march was not a coincidence. History has been a source of inspiration in these protests because on 6 April 1985 an uprising broke out to overthrow the military regime of General Jaafar Nimeiri and end his 16-year rule. On that day, the army sided with the people and took over power for one year before handing it to the elected government of Sadiq al-Mahdi.

The opposition launched an intensive mass media campaign to mobilize large crowds to take to the streets of Khartoum at 1pm local time on 6 April and march toward the army headquarters and stage a sit-in in front of the Ministry of Defence, which houses the residences of government leaders.

Prior to 6 April, the opposition issued a statement expressing its belief in the national role of the army and requesting its support to fulfill the people’s demands.

The protesters were able to break through the security barriers and withstand the excessive force and tear gas used by the security forces and police. At 3pm the same day, the protestors also succeeded, after several attempts, in reaching the army headquarters and occupying all the streets leading to it. By the evening, hundreds of thousands of people surrounded the building.

Despite their jubilation, the revolutionaries were concerned that the ruling party’s armed militias would interfere and the security forces would move in to break up the sit-in by force. Indeed, armed groups known as ‘shadow brigades’ and affiliated with al-Bashir’s National Congress Party and backed by the NISS infiltrated from the northern side of the army’s headquarters and moved to the top of a building under construction. They shot at the protesters, prompting the army’s Naval Brigade to shoot back, leaving four army personnel dead. This caused junior officers and soldiers to rebel against the army commanders supporting the ousted president and declare their support for the demands of the protesters.

On the second day, attempts to break up the sit-in by force continued, but hundreds of thousands of citizens joined the protesters. At one point, the total number of people surrounding the army headquarters was estimated at 3 million. The sight of them performing the Friday prayer together was remarkable.

The protesters remained steadfast for the third and fourth days in temperatures exceeding 40 degrees Celsius and despite a shortage of water and food. Repeated attempts to disperse them earned them popular sympathy, and on the third day (Monday) more supporters poured into the square. The protesters were able to control two bridges on the Blue Nile, including the Cooper Bridge which became a pedestrian bridge.

On the fourth day (Tuesday), the protesters received supplies from across Khartoum, especially from the Barri neighbourhood closest to the protests. Along the street opposite the army headquarters, the protesters erected tents to take shelter from the sun, and young men and women started carrying bags to collect donations to buy water and food. During daylight hours, people arriving on the street made sure to carry water, tea and coffee in their cars. At night, sympathizers sent food such as dates, and many families brought food and drinks to be distributed to the protesters.

The protesters’ control of the street running from the University of Khartoum tunnel in the west to the outskirts of Barri in the east allowed for the arrival of food and water. Cars owned by companies and factories facilitated the transportation of protesters and the distribution of food.

Fall of a dictator

Thursday 10 April was a decisive day because the army commanders sided with the people, ousted al-Bashir after 30 years in power and put him under house arrest in the army headquarters.

In a speech broadcast by the state-run television, Awad Mohamed Ahmed Ibn Auf, defence minister and al-Bashir’s second in command announced the formation of a military council to run the country for a transitional period of two years to be followed by elections. He noted that al-Bashir was being held “in a safe place”, but he did not explain who would head the military council. He also announced the suspension of the constitution and declared a three-month state of emergency and the closure of Sudan’s airspace for 24 hours and the border crossings until further notice. He also dissolved the National Assembly, state councils, the presidential establishment and the Council of Ministers.

In a subsequent broadcast the same day, the state-run television announced that Ibn Auf had been named chair of the military council and that Lieutenant General Kamal Abdel-Maarouf al-Mahi had been appointed deputy chair.

The protestors were frustrated by the news, demanding that Ibn Auf step down and chanting the slogan ‘Down to the Second Leader’. The Sudanese Professionals Association called for ongoing sit-ins outside the Ministry of Defence until all leaders of the former regime were overthrown.

The next morning, Ibn Auf responded to the demand and stepped down from the military council. People quickly took to the streets of Khartoum and other cities to express their jubilation over the ouster of two generals in 24 hours. Ibn Auf was replaced by Staff Lieutenant General Abdel Fattah Abdelrahman al-Burhan.

This was followed by the resignation on Friday 11 April of Lieutenant General Abdallah Gosh, the feared head of the NISS.

Al-Burhan also appointed to the council Lieutenant General Mohammad Hamdan Duqlo, head of the Rapid Response Units that are involved in the war in Yemen alongside Saudi Arabia and the United Arab Emirates. The council also included eight other military personnel, although al-Burhan vowed to hand over the government to a civil authority if the political parties reach an agreement. He also held meetings with the parties behind the Declaration of Freedom and Change, which have considerable influence on the protest movement.

However, the military council came under pressure from protestors too. The parties behind the Declaration of Freedom and Change refused to negotiate with the council’s political committee, and they named three council members, Lieutenant General Umar Zein al-Abidin, Lieutenant General Jalal al-Din al-Shaykh and Lieutenant General Babakr al-Tayyab, who they wanted to see removed because of their Islamist background and explicit affiliation with the previous regime.

The deepening disagreements have caused the negotiations to stall, with both sides accusing the other of having ambitions to assume power.

With the negotiations still on hold, the fate of the revolution remains unclear as fears grow that it may be aborted before it achieves its aims. 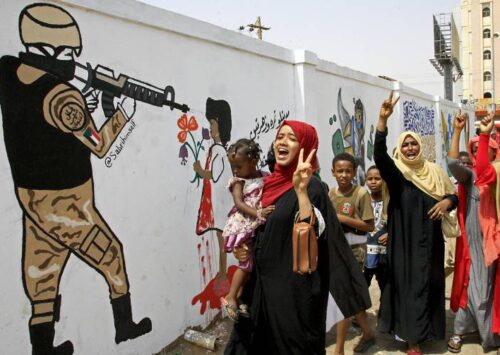 Sudan’s Military and Opposition Forces Sign Historic Constitutional Declaration
Regionally and internationally, the agreement was met with a sigh of relief. Concerns that Sudan might follow in the foo...