After the Sudanese army seized power on 11 April 2019 following weeks of street protests, Saudi Arabia was the first country to recognize the new reality in the African country and declare its support for the transitional military council.

Saudi Arabia said that it supported the aspirations of the Sudanese people for their future, and that its position emanates from the historical ties between the two countries.

According to a statement published by the Saudi Press Agency, ‘The kingdom declares its support for the steps announced by the military council to save the people’s lives and property, and its support for the Sudanese people…[Saudi Arabia] hopes that this will achieve security and stability for Sudan, and calls on all segments of the Sudanese people, regardless of their orientations, to give priority to national interests to meet their aspirations and hopes for prosperity, development and well-being.’

Following the resignation of Awad Mohamed Ahmed Ibn Auf, interim chairman of the military council, less than 24 hours after his appointment and his replacement by Lieutenant General Abdel Fattah al-Burhan Abdelrahman, the United Arab Emirates (UAE) also expressed its support. A statement by the Emirati Foreign Ministry on 13 April said that ‘the United Arab Emirates is following with interest developments in Sudan at this very decisive stage of the Sudanese history’.

UAE’s Minister of State for Foreign Affairs Anwar Gargash said that Arab countries support a transition in Sudan that balances the people’s aspirations and the stability of Sudanese institutions, adding: “We have seen total chaos in the region and we do not want more of this.”

In a tweet, he said that it is perfectly legitimate that Arab countries support an orderly and smooth transition in Sudan.

The African Union intervened two days after al-Burhan’s appointment, threatening to suspend Sudan’s membership if the army did not hand over power to civilians within 15 days.

The African Union expressed its support for the protesters’ demand to form a civil government, noting that the 55-member union believes that ‘the army’s leadership of the transitional period completely contradicts the aspirations of the Sudanese people’.

This position subsequently evolved after the military council entered into negotiations with the forces of the Declaration of Freedom and Change, which are mobilizing the people on the street, extending to 60 days the deadline of the handover of power to a civil government.

The decision was made at the conclusion of a meeting convened by the African Union Peace and Security Council in Tunis to discuss the situation in Sudan. The Peace and Security Council explained that the extension was based on developments in Sudan and the dialogue between the political forces, as well as in response to justifications put forward by the military council that it had assumed power to fulfill the people’s demands and end the bloodshed.

The Peace and Security Council also noted that a delegation will be sent to meet with all political forces and the military council to ensure a smooth transition of power.

Egypt’s traditional eagerness to intervene in Sudanese politics was evident only hours after the protesters accepted al-Burhan’s chairmanship of the military council and the situation stabilized. Egyptian President Abdel Fattah al-Sisi called for a consultation summit of the African Union to be convened in Cairo to discuss the situation in Sudan. The summit was attended by the heads of state of Chad, Djibouti, Rwanda, the Democratic Republic of Congo , Somalia and South Africa, the adviser to the president of South Sudan and the chairperson of the African Union Commission.

During the meeting, al-Sisi called for international support for Sudan in the transitional period, including from his own country. He also said that the mini-summit had given the military council more time to establish a democratic system in Sudan.

Al-Sisi’s decision to convene the summit in Cairo was strongly condemned by the Sudanese protesters staging sit-ins in front of the army headquarters and by a large number of protesters who gathered on the second day outside the Egyptian embassy in the capital Khartoum, who described it as ‘Egyptian interference in Sudanese affairs’.

European and US reject military council

The military council also met with disapproval from the European Union (EU). The EU’s foreign policy chief Federica Mogherini said during a speech to the EU parliament that the EU expects the military council to “take steps to strengthen confidence”, including releasing political prisoners and punishing those responsible for the attacks that claimed the lives of many demonstrators. She also noted that taking these steps would allow for the launch of meaningful political talks among all parties in Sudan.

She expressed the EU’s desire for civilians to lead the transition in Sudan and stressed that the EU would not recognize the legitimacy of the military council.

The United States (US) has also said that it supports a transition led by civilians. A group of 92 Democrat and Republican members of Congress signed a letter to the US Secretary of State and the Secretary of the Treasury criticizing countries that support the military council, explicitly referring to Saudi Arabia and the UAE and their $3 billion in financial and humanitarian support for the council.

The letter also urged the government not to recognize the military council or grant visas to any of its members and demanded that any members who had participated in war crimes, crimes against humanity and genocide in Darfur, the Nuba Mountains and the Blue Nile in the past be held accountable. It also called on the government to apply pressure to open conflict areas urgently to international relief organizations.

Moreover, the US lawmakers called for coordination between the Treasury Department and US and international monitoring and banking institutions to track down funds looted by ousted President Omar al-Bashir‘s regime and make every effort to hand over the funds to the transitional civilian government. A similar request was made to stop the trade of gold from Sudan to world markets, specifically Dubai, and to work to return the gold to the transitional government.

The most prominent US position on the situation in Sudan was expressed by State Department official Makila James, who said that Washington supports “the legitimate demand of the Sudanese people to have a government led by civilians”. During a meeting with a delegation from the Sudanese opposition in Khartoum, James stressed that “the priority of the United States is to see a civilian transition leading to a peaceful transition of power and have a democratic system in Sudan”.

The Sudanese revolution fell victim to disagreements in the Arabian Gulf region, especially those between the Saudi-Emirati-Egyptian alliance on the one hand and the Turkish-Qatari alliance on the other. Protesters in Sudan believe that the Saudi-Emirati-Egyptian alliance is trying to hijack the revolution, prevent the transfer of power to civilians and support the military council to ensure its loyalty to the alliance against Qatar and Turkey and keep Sudanese troops supporting the Saudi-led coalition in the war in Yemen.

Western parties started to speak explicitly about this reality and fears that the transition to a civilian rule in Sudan would be obstructed. Britain’s Financial Times pointed out that the $3 billion package from Saudi Arabia and the UAE was paving the way for a second confrontation between the army and the people.

The newspaper quoted Rosalinda Marsden, former British ambassador to Khartoum, as saying that in the past days Abu Dhabi and Riyadh have made it clear that they support the military council, and that there is a danger that extending the deadline for handing over power would encourage the military council to slow down the transition process.

The intentions of Saudi Arabia and the UAE were additionally revealed with the arrival of a high-level Emirati delegation to Khartoum led by Taha al-Hussein, former head of the president’s office in Sudan and now an African affairs advisor in Saudi Arabia. During the two-day visit, al-Hussein met with al-Burhan, who praised the “distinguished” relations between Sudan and the two Gulf countries.

Protesters opposed these relations, chanting slogans against Saudi Arabia and the UAE as well as against what they considered to be the two countries’ rejection of the Arab Spring uprisings.

Saudi Arabia and the UAE’s attempts to tame the military council have continued. According to The New York Times, representatives of five Sudanese opposition groups, including a number of armed factions, visited the UAE for talks about joining a military-led government.

The newspaper said that Yasser Arman, deputy head of the Sudan People’s Liberation Movement, also travelled to the UAE to meet with officials there. “We are not satisfied with the American role. They need to do more to engage with the people who made the revolution,” he was quoted as saying.

Press sources said that Mariam Sadiq al-Mahdi arrived in Abu Dhabi on an unannounced visit on April 23rd, 2019. Al-Mahdi is deputy head of the Ummah Party, which is led by her father, the last democratically elected prime minister before al-Bashir seized power in the 1989 coup.

The same sources confirmed that Khalid Umar Yusuf, secretary general of the Sudanese Congress Party and official spokesperson for the forces of the Declaration of Freedom and Change that are engaged in negotiations with the military council, visited Abu Dhabi on his way back from Britain to Khartoum in mid-April.

The UAE has become a major player in Sudanese politics, and protesters are concerned about support for the military and attempts to produce a Sudanese president similar to Egyptian strongman al-Sisi, who shares al-Burhan’s first name. 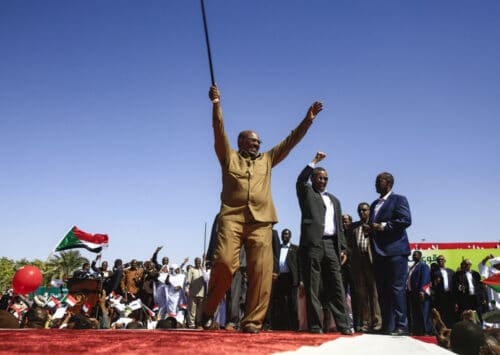