The Changing Political and Military Landscape in Darfur

Nearly 14 years since the outbreak of the bloody conflict in Sudan’s western Darfur region, which has claimed the lives of hundreds of thousands of people and displaced millions more, the humanitarian situation remains largely unaltered, although much has changed politically. Even so, there is little hope that peace, security and stability will be restored anytime soon.

In August 2016, both Gibril Ibrahim, leader of the Justice and Equality Movement, and Minni Minnawi, commander of the Sudan Liberation Movement/Army, signed the so-called ‘Roadmap Agreement’ with the Sudanese government, mediated by the African Union. It was preceded by dozens of aborted agreements between Khartoum and the country’s various rebel movements. Only a few people in Sudan are optimistic that this latest agreement will have a better chance of success than the previous ones. However, it may be the most important and impactful agreement to be signed in Darfur for several reasons, as this article explains.

The humanitarian and security situation in Darfur continues to be tragic. This is despite the decreasing armed confrontations between the rebel movements on the one hand, and the government forces and their militias on the other hand, and despite the relatively lower death toll in direct confrontations, since the rebel movements have become less capable of carrying out such attacks.

The conflict was originally sparked by traditional rivalry between nomadic Arab tribes and tribes of African origin who lived on agriculture (the conflict is also referred to locally as the Arab-Zurraga [Africans] war. However, the political bias of the government in Khartoum toward the Arab tribes and the arming of Arab militias known as the Janjaweed have exacerbated the situation and made it one of the bloodiest and most destructive wars in Africa.

A report issued by the UN Security Council in June, announcing the extension of the mandate of the African Union-United Nations Hybrid Operation in Darfur (UNAMID) for an additional year, said that the conflict in Darfur has not witnessed any change, given the failure of the Sudanese government and armed movements to reach a political settlement. The report attributed the stalemate to the continued tribal fighting and military confrontations between government forces and the Sudan Liberation Movement led by Abdul Wahid Nour (SLA/AW), although the confrontations are not as intense as in the past.

The report also referred to the poor conditions that are hampering the return of displaced people. It confirmed that military operations and aerial bombings continue to target areas in Jebel Marra, despite the government declaring Darfur free of armed movements after it gained control of the last strongholds of the SLA/AW in April 2016.

The report affirmed that the tribal conflicts in Darfur have caused one-third of the deaths in the region, adding that the exodus from conflict zones continues, with the total number of displaced people now standing at 2.6 million, 1.6 million of whom remain in camps and at least 2 million of whom are in need of humanitarian assistance. Some 2.7 million people now face emergency or crisis levels of food insecurity in Darfur. The report added that some 106,000 people have been displaced in this year. This is in addition to the 300,000 Sudanese refugees who remain in Chad and 50,000 others from South Sudan who have recently arrived in East Darfur.

However, the government in Khartoum insists that the humanitarian situation in Darfur has improved following the end of military operations in Jebel Marra, with the return of 800,000 displaced people in May and the return of a further 24,000 displaced people after the end of the Jebel Marra incidents. The government has also confirmed that it is planning to continue the work of the UNAMID exit strategy team in order to develop and implement a plan to facilitate the departure of UNAMID from the region as agreed upon “without evasion or delay”, according to Sudan’s representative to the United Nations, Omar Dahab.

The UN Security Council’s intervention in Darfur took the form of a special commission on Darfur and the first UN resolution in 2005 to impose sanctions on Sudan. This was a major shift that culminated in the establishment of UNAMID for peacekeeping operations in Darfur in July 2007, following the UN Security Council-endorsed Resolution 1769 under Chapter VII of the UN Charter. This was also the resolution that the US administration relied on in its sanctions against the Government of Sudan.

UNAMID presently consists of 15,845 military forces, 1,583 police personnel and 13 formed police units of up to 140 personnel each (4,200 in total) in Darfur. These forces are tasked with protecting civilians, but UNAMID, in partnership with the Sudanese authorities, also contributes to maintaining security, delivering humanitarian assistance, monitoring the implementation of agreements and assisting in achieving a comprehensive political process, as well as promoting human rights and the rule of law.

The most important development, which the UN Security Council report did not mention explicitly, is that the Justice and Equality Movement (JEM) and the Sudan Liberation Movement/Army no longer have a significant military presence in Darfur. The Sudanese government even went as far as declaring Darfur free of rebellion. JEM had been dealt a fatal military blow by the government’s Rapid Support Forces in April 2015 in Goz Degno, southern Darfur, as the movement’s elite forces were trying to move from South Sudan to North Sudan. The movement’s forces became scattered, surrendered or joined the government forces or small factions that had defected from the movement.

Moreover, the Sudan Liberation Movement/Army was the target of a series of attacks and became divided, making it unable to muster an effective military presence in Darfur. As a result, the only military presence still in Darfur is a small force affiliated with the SLA/AW which has refused to reach any understanding with the government. This force is concentrated in the rugged areas of Jebel Marra. It puts up strong resistance but it has no access to military supplies or support from outside the area, and it may not last for long given the current conditions.

The role of foreign parties

It is clear that regional and international factors have contributed to the decline of the military insurgency in the face of the combat capabilities of government army forces. The intensified conflicts and wars in South Sudan after independence in 2011 deprived the Darfur movements of strong support. Besides, some Darfur factions became involved in the conflicts in South Sudan and Libya to a lesser extent, which weakened their positions to a certain degree.

Moreover, in 2013 the government of neighbouring Chad completely stopped its long-time support of the Darfur movements, despite the strong ethnic links between Chadian President Idriss Deby and the Zaghawa tribe, the backbone of the two movements in Darfur. However, the most important factor in the Darfur crisis has been the international community, specifically the United States and the European Union, which have modified their policies toward the Sudanese government for reasons related to the international community’s priorities in sub-Saharan Africa.

In light of the expansion of al-Qaeda, Islamic State and Boko Haram in Mali, Niger, Nigeria, Libya, southern Algeria and other areas in the north of the African savanna belt, additional chaos and the disintegration of the central state in Sudan would seriously threaten the US-EU’s war on terror. This is extremely important, especially because it comes at a time when the Sudanese government has started to cooperate with the Americans to an unprecedented extent.

Furthermore, the EU now sees in the Sudanese government an important ally in its efforts to stem the flow of African refugees to Europe. This is because a significant portion of African refugees cross Sudan to reach Libya and Egypt, before heading to Europe using a variety of means. A Sudanese-European cooperation in this field started several months ago, for which the Sudanese government has received economic aid from Europe. The Darfur rebel leaders, who once enjoyed domestic and international support, now have no option but to accept a deal with Khartoum to ensure that they have a share of the power and fortunes of the country, two concepts that are familiar in Sudanese political discourse. 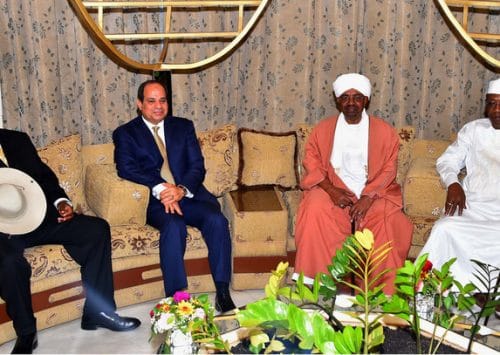 Sudan’s National Dialogue: A Real Outcome or A Buying-time Process?
The Sudanese national dialogue initiated by President Omar Hassan al-Bashir’s government in January 2014 resulted in a...