Sudan has been member of the OIC since 1969, and ratified all but one of the fundamental ILO conventions, namely that related to freedom of association (C087).

On February 22, 1974 Sudan confirmed its accession to the Convention and Protocol. Through “accession” a state accepts the offer or the opportunity to become a party to a treaty, which has already negotiated and signed by other states. It has the same legal effect as ratification. It did hold reservations to article 26, however, pertaining to freedom of movement.

The Convention on the Elimination of All Forms of Discrimination against Women – also called CEDAW, was approved during the General Assembly Session on 18 December, 1979 and entered into force on 3 September 1981. Sudan is not party to CEDAW.

The Convention on the Rights of Persons with Disabilities was approved during the General Assembly session on December 13, 2006 and came into force on May 3, 2008. Simultaneously, the Optional Protocol was approved, giving the Committee on the Rights of Persons with Disabilities (CRPD) competence to examine individual complaints with regard to alleged violations by States parties to the Protocol. The CRPD is the body of independent experts that monitors implementation of the Convention. Sudan signed the Convention on March 30, 2007 and ratified it on April 24, 2009. It also acceded to the Optional Protocol on April 24, 2009.

The Convention against Torture and Other Cruel, Inhuman, or Degrading Treatment or Punishment, also referred to as just the Convention against Torture, was adopted during the General Assembly session on December 10, 1984. On June 26, 1987 it was registered and thereby came into force. Its implementation is monitored by the Committee Against Torture(CAT), composed of ten individuals of various nationalities. All signatory states are obliged to send regular reports to the CAT, based on which recommendations are made. Sudan signed the Convention on June 4, 1986 without reservations, but no further action has been taken since.

The International Convention on the Protection of the Rights of All Migrant Workers and Members of their Families was approved by the General Assembly on December 18, 1990 and entered into force on July 1, 2003. Sudan is not party to the Convention.

Sudan acceded to the Convention on March 21, 1977 with no reservations.

In Darfur, the authorities failed to protect people from violent clashes between communities, especially between African farmers and Arab camel- and cattle-herders.

Sudanese forces continue to attack the villages of Darfurian African tribes suspected of support for rebel groups. More than 500,000 people have been displaced by the conflict. The Janjaweed, Arab tribes militia armed by the government, have committed numerous atrocities against African Darfurians, killing thousands of civilians, burning villages, and looting properties. Most of the Janjaweed were later incorporated into the national army under the titles of Borders Guards and Rapid Support Forces.

Continuing insecurity has undermined attempts by the United Nations and African Union Mission in Darfur (UNAMID) to pacify the region.

In South Kordofan and the Blue Nile, indiscriminate shelling by Sudanese government troops and clashes with rebels prevented humanitarian aid from reaching thousands of displaced people in these states, forcing more than 225,000 people to flee to refugee camps in the Republic of South Sudan and Ethiopia.

Sudanese security forces continued to arrest and detain activists and members of opposition parties, controlled the media, restricted the work of civil society, and harassed associations that receive foreign funding.

In September 2014 protests broke out in various parts of Sudan in response to rises in the prices of fuel and other essential commodities. Sudanese forces responded by killing at least 175 demonstrators and detaining hundreds of protesters, opposition members, and activists.

The National Security Act (NSA) of 2010 and many other laws contradict basic principles of human rights. The NSA, for instance, renewed the extensive powers of the National Security Agencies to arrest and detain people up to four and a half months without judicial oversight, as well as to search and seize. The NSA law enables security agents to commit human rights violations such as torture and other ill treatment and to extract “confessions” under duress. The 2010 NSA Act also maintains the immunity of National Intelligence and Security Service agents from prosecution and disciplinary action for all acts committed in the course of their work and creates a climate of impunity. The most recent amendment of the constitution in 2015, extended the mandate of the National Security Organizations from collecting and analyzing security information to forming and maintaining combat forces similar to the army. 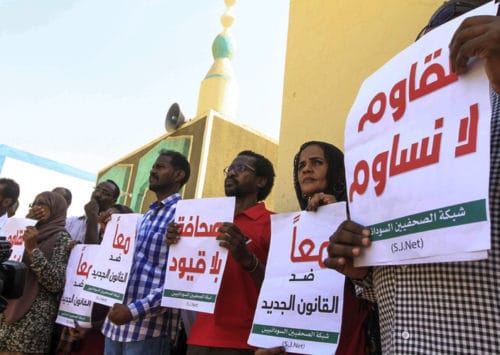 Human Rights in Sudan Raise Domestic, International Concerns
It seems that tangible progress in human rights not only depends on the efforts of Sudanese civil society, which has been severely hampered by government restrictions, but also on the pressure exerted by the international communit...