Syria’s surface equals 185,180 square kilometres, including the 1,295 square kilometres of Israeli-occupied Golan Heights. The country is seventeen times larger than its neighbour Lebanon, eight times the size of Israel and twice that of Jordan. But Syria is dwarfed by its neighbours in the north and east: it is only a quarter of Turkey’s size, and it is 2.5 times smaller than Iraq.[/fusion_text]

Unless stated otherwise, information in this chapter is provided by Strategy & National Environment Action Plan and by The State of the Environment and Development in the Mediterranean, 2009)

Syria has many environmental problems. These include deforestation, overgrazing, soil erosion, desertification, water pollution from the dumping of raw sewage and wastes from petroleum refining, and inadequate supplies of potable water. Water shortages, exacerbated by population growth, industrial expansion, and water pollution are a significant long-term constraint on economic development. Dust storms and sandstorms are natural hazards in desert areas.

The air pollution is extremely high in Syria’s big cities. Average concentrations of carbon monoxide vary between 2 and 20 ppm, due to the dense traffic (allowable limit specified by World Health Organization: 9 ppm). CO2 emissions amounted to 3 metric tons per capita (World Bank 2009). Furthermore, public transport is often inadequate. For these and other reasons, the decision was made to build a metro. The estimated cost of one billion euro is partly financed by the European Union (by means of the European Investment Bank, EIB and its Facility for Euro-Mediterranean Investment and Partnership, FEMIP), as part of a package to help modernize Syrian cities (urban renewal, urban traffic and transport, public tourist facilities, wastewater, and solid waste management). The preliminary studies concerning the subway were to be finished by 2009, a tender issued in 2010 and the first line, the ‘Green Line’, running east-west, finished by 2016. In July 2010, plans about the metro were updated.

The Strategy & National Environmental Action Plan (sponsored by UNDP and World Bank) states: ‘For a long time, Syria was renowned for its very diverse geographic and climatic features, which provided a variety of environments suitable for a wide range of plant and animal species, and a great genetic diversity within these. However, as consequence of natural habitat destruction, accompanied by population growth and associated human activities, urban development and agricultural expansion, many categories of biological and genetic resources are being depleted and endangered.’ Whatever the subject (water resources and quality, air quality, biodiversity, wastes), the report is deeply disheartening. Since it was published (2003), some projects (reforestation, wastewater treatment, sustainable use of resources, protected areas) were initiated, and some progress was made, but finances are a permanent problem.

Syria depends for 43 percent on the water of the Euphrates, which it has to share with Turkey and Iraq. Irrigation water accounts for almost 90 percent of Syria’s water demand – and yet, only a small portion of the arable land is irrigated. The UNEP State of the Environment and Development in the Mediterranean report (2009) sums up the main obstacles to the implementation of water demand management in Syria: lack of coordination between ministries; contradictory policies: the assistance policy for farmers to buy modern irrigation systems is not, for example, coordinated with the pricing policy for irrigation water; inadequately skilled personnel; drinking water wasted due to a lack of public awareness.

The forecasts, however, are not very positive, if only because a rise in temperature and a decrease in rainfall are projected, thus increasing the risk of droughts like those Syria experienced in recent years.[

Syria has a narrow coastal plain which runs along the Mediterranean Sea from north to south. North of Tartus, the mountains plunge directly into the sea. To the east, the Ansariya mountain range borders the coastal plain from north to south. The mountains have an average width of 32 kilometres. They reach their highest point (1,562 metres) east of Latakia. On their eastern flank runs the Ghab Depression, a 64 kilometre long valley where the Orontes River (Nahr al-Asi) flows northward to Turkey and into the Mediterranean Sea.

The Anti-Lebanon Mountains (Jibal Lubnan al-Sharqiya) mark Syria’s border with Lebanon. The average height of this mountain chain ranges from 1,800 to 2,100 metres. Its highest point is Mount Hermon (Jabal al-Shaykh) at 2,814 metres. The Abu Rujmayn chain prolongs the Ruwaq Mountains that run more or less parallel to the Anti-Lebanon Mountain range, though somewhat to the east. In the extreme south-east, Mount al-Duruz rises to 1,800 metres. The Bishri Mountains stretch north-eastward across the central part of the country.

The rest of the country is desert-like, with mountainous terrains. When there is sufficient rainfall, the Syrian Desert turns into green pasture suitable for grazing. The Hawran Plain in the south-west, between Mount Hermon and the Jordanian frontier, is rock-strewn yet fertile. The only navigable river and main source of water is the Euphrates, which flows south-east across the north-eastern part of Syria from its source in the Turkish Taurus Range. Its tributaries are the Nahr al-Balikh and the Nahr al-Khabour. In 1973, an artificial lake (Lake Assad) was created when a dam was erected in the river near al-Thawra; it provides water for irrigation purposes and drinking water for the inhabitants of Aleppo.

The coast and the western mountains have a Mediterranean climate; there is hardly any rainfall from May to October. In the summer, the average temperature is 32 ºC, but it is cooler in the mountains. The winters are mild, with temperatures around 10 ºC. The inland regions have a more continental climate, with hotter summers and colder winters (Eastern Syria is part of the vast Arab Desert). In the mountains, snow and frost are not uncommon in the winter. Once or twice a year, sand bearing winds (khamsini) raise a wall of dust up to 1,500 metres high.

Syria’s vegetation can hardly be called rich, as its soil is extremely arid. The only fertile soils are to be found along the banks of the rivers, and – astonishingly enough – in the rock-strewn south-western plain called Hawran. According to the Ministry for the Environment, 45 percent of the lands consists of pastures, 32 percent of fertile lands, 20 percent of arid lands and only 3 percent of forests (as compared to 32 percent at the beginning of the 20th century).
(See Strategy & National Environmental Action Plan For The Syrian Arab Republic (SNEAP), 2003)

State of the environment

Syria’s environment is in a dire state: deforestation, overgrazing, soil erosion, desertification, lack of (drinking) water, water pollution from raw sewage and industrial waste (like petroleum refining waste) are just a few of the problems. The SNEAP report states: ‘For a long time, Syria was renowned for its very diverse geographic and climatic features, which provided a variety of environments suitable for a wide range of plant and animal species, and a great genetic diversity within these. However, as consequence of natural habitat destruction, accompanied by population growth and associated human activities, urban development and agricultural expansion, many categories of biological and genetic resources are being depleted and endangered.’

Reports are disconcerting regarding issues such as water resources and quality, air quality, biodiversity, and waste. Since 2003, some projects (reforestation, wastewater treatment, sustainable use of resources, protected areas) have been initiated. However, little progress has been made. Finances are a permanent problem. From 2003, environmental issues have been dealt with by officials of the Ministry of Local Administration. In April 2009, a new Ministry of Environment was established. But the work to protect the environment conflicts with the interests of the industrial sector.

Yew, lime, and fir trees grow in what is left of the forests on the mountain slopes. Scrubs and scrubby underbrush cover many slopes. Trees do not grow on the steppe, except for some sparsely distributed hawthorns. In early spring, a variety of (flowering) plants covers the land. From June, however, the weather is too dry for plants to survive.

There are not that many wild animals left. Some wolves, hyenas (endangered species), foxes, badgers, wild boar, and jackals still live in remote areas. There are also deer (endangered species), bears, squirrels, gazelles, and jerboas (nocturnal rodents). Birds are relatively rare. Syria is on the route of migrating birds, but according to the SNEAP report, ‘as a consequence of natural habitat destruction, due to the population growth and associated human activities, urban development and agricultural expansion, many categories of biological and genetic resources are being depleted and endangered’. Many animals – including the camel and the wild goat – have become endangered species.

Only a third of the surface consists of fertile land (32 percent) or forests (3 percent). Pastures form 45 percent of the land, where there is extensive cattle breeding. This percentage includes the Syrian Desert, providing there is sufficient rainfall (see the Strategic & National Environmental Action Plan). Arable land covers 25 percent of the surface, located in the north-western part of the country, and along the rivers Euphrates and Orontes (al-Asi). Another fertile region is Hawran, close to the Jordanian border in the south.

A 2003 Food and Agriculture Organization (FAO) report states: ‘The agricultural sector in Syria uses up to 85 percent of all the available water resources in the country (FAO-MAAR, 1999). Irrigated agriculture has increased steadily in Syria over the last decades, almost doubling since 1985. (…) Total expenditures for irrigated agriculture accounted for almost 70 percent of all expenditures in agriculture (Sarris, 2001).’ Yet the percentage of irrigated land remains low: ‘From the 18.5 million hectare of total lands of the Syrian Arab Republic, cultivated land extends over an area of 5,484,000 hectare, of which 1,213,000 is irrigated land (22 percent), 3,655,000 hectare is rain-fed land (67 percent) and 616,000 hectare is fallow land (11 percent) (FAO-MAAR, 2001). Irrigated lands are not distributed evenly across the country and most concentrate along the Euphrates River, in the coastal areas and in the central regions. The size of the irrigated holdings is substantially smaller than the size of the rain-fed holdings and varies distinctively across regions (governorates). At the national level, the average holding size is 9,2 hectare and for irrigated farms is 3,6 hectare.’ (See FAO, Syrian Agriculture at the Crossroads, 2003)

Syria suffered from harsh droughts between 2007 and 2010. Despite the fact that some rain fell in 2010, the harvest failed again in that year. 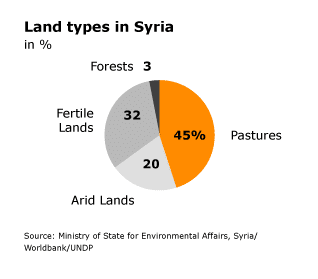 The north-eastern part of Syria is considered extremely vulnerable by the World Food Program. The drought has had a serious impact on the nutritional status and livelihoods of farmers and herdsmen.

24 areas are officially listed as Protected Areas (PA’s) or Main Biodiversity Biomes, with a total of 222,591 hectare. Their size and nature vary from the 60,000 hectare mountainous pistachio forest of Jabal Abu Rujmayn (or Abou Rojmen) in central Syria (governorate of Homs) to the 133 hectare Jubbata al-Khashab forest (governorate of Quneitra in the south) or some very small National Heritage areas near Damascus.

These Protected Areas ‘require further development, in addition to the establishment of the appropriate administrative and executive plans’, as stated by the Ministry of Environment (see Strategic & National Environmental Action Plan, 2003). Their actual status is unclear. Further plans have been developed for a number of regions, which in particular address raising awareness of the local population, and training programmes for personnel, but they are yet to materialize. Besides these PA’s, there are about 100,000 hectare of Protected Grazing Areas.