Fanack Home / Syria / History of Syria from Past to Present / In Syria, al-Assad Gains Upper Hand as US Withdraws Support for Moderate Rebels

In Syria, al-Assad Gains Upper Hand as US Withdraws Support for Moderate Rebels

Although the final outcome of the Syrian conflict remains to be seen in August 2017, the changing stance of the world powers engaged in a proxy war in the country has given President Bashar al-Assad the upper hand over rebels.

The six-year war in Syria has entered yet another phase, with the United States (US) withdrawing support for moderate rebels fighting the regime of President Bashar al-Assad and intensifying its offensive against the Islamic State (IS).

Meanwhile, Russia had been left with an increasingly decisive role in the areas where fighting between the rebels and regime forces is ongoing. Russia is taking the lead in implementing a new ceasefire agreement in the rebel-held areas of northern Homs, as it has in other recent ceasefire deals.

In July 2017, the Trump administration reportedly decided to cut support for an approximately $1 billion CIA programme introduced under former president Barack Obama, which had provided arms and training to moderate rebel groups fighting al-Assad since 2013. In a tweet, Trump characterized the programme as ‘massive, dangerous and wasteful payments to Syrian rebels fighting al-Assad’. In some cases, equipment provided by the US to moderate rebels had ended up in the hands of extremist groups including the al-Qaeda-linked Jabhat al-Nusra.

The termination of the programme underlines the changing relationship between the US and Russia. After Russia launched a military offensive in support of the Syrian regime in 2015, the US’s support for the rebel groups put the two powers in conflict.

An official who spoke to Reuters about the end of the programme said it was “a signal to Putin that the [US] administration wants to improve ties to Russia”, although the official acknowledged that it was not a major concession since al-Assad’s forces were already winning.

Speaking on the same topic, Charles Lister, an expert on Syria with the Middle East Institute, told the New York Times that the US “never gave it the necessary resources or space to determine the dynamics of the battlefield. They were drip-feeding opposition groups just enough to survive, but never enough to become dominant actors.”

Rebels on the ground told the Financial Times that support had been decreasing for months, but they had not received official word that it was to be halted. A rebel commander said that in spite of the limited effectiveness of the US support, “I don’t want the Americans to leave, because this means Syria has been surrendered – on one side to the Turks and the Muslim Brotherhood groups it supports in Syria, and on the other side to Russia and the regime.”

Russia and Iran are backing al-Assad, while Turkey has been supporting rebel groups. The three countries signed a deal in May 2017 calling for the creation of four ‘de-escalation zones’ in Syria.

The US was not a party to the deal. However, in July 2017, the US and Russia, along with Jordan, announced a ceasefire deal in the south-western provinces of Daraa, Quneita and Sweida. US Secretary of State Rex Tillerson said of the deal, “I think this is our first indication of the US and Russia being able to work together in Syria.”

The Israeli newspaper Haaretz reported that Israel – which was not an official party to the ceasefire – nevertheless took part in secret talks on the proposed deal, during which Israeli officials raised concerns that it did not address the presence of Iran and the Iran-backed Lebanese militia Hezbollah in the area. As reported by Haaretz, the Israelis were upset that the final deal said only in general terms that foreign armed parties should be prevented from entering the de-escalation zones.

One month into the deal, the UK-based Syrian Observatory for Human Rights reported that it had ‘caused a significant drop in the death toll in the three provinces, especially among civilians who were killed by warplanes’. Only two people were killed by shelling in the first month of the deal, compared to 84 the month before. However, the group also reported multiple violations of the agreement.

Soon after the deal was put in place, Russia and the Syria announced a ceasefire deal in the Damascus suburban area of East Ghouta, although the Syrian Observatory reported that shelling and fighting has also continued in that area.

Most recently, in early August 2017, Russia’s Defence Ministry and rebels north of Homs announced a deal for a ceasefire in that area. Russia has set up checkpoints to monitor the ceasefire, which – like the others – was almost immediately broken by the warring sides. The Syrian government was not officially part of the deal, nor was the US. In another recent development with consequences yet to be seen, a group with ties to al-Qaeda has taken control of Idlib amid fighting between rebel factions.

The coalition that took the upper hand in Idlib, known as Hayet Tahrir al-Sham, is dominated by the group formerly known as Jabhat al-Nusra. Several thousand al-Nusra fighters, families and other refugees were recently transported to Idlib from the eastern border region of Lebanon, under a deal between Hezbollah and Hayet Tahrir al-Sham, after Hezbollah defeated the Syrian group in a military operation.

Meanwhile, the US-led offensive against IS has continued in Raqqa, driven largely by Kurdish allies who supply many of the Syrian Democratic Forces on the ground. About 45 per cent of the territory has been wrested from IS, but at the expense of a high civilian death toll. Alex Hopkins, a web producer with Airwars, a site that documents air strikes and civilian casualties in the fight against IS, said that 59 per cent of the incidents reviewed in Syria in May 2017 had been carried out by the US-led coalition. He concluded, “Reviewing these incidents days after day, I can’t help but feel that coalition protections for civilians are woefully inadequate.”

What will happen to the US’s Kurdish allies once IS is ousted from its strongholds in Syria is another open question. Coordination has increased between the US and the Syrian Democratic Forces. This has increased tensions between the US and Turkey, which is anxious about the prospect of the creation of a Kurdish state in northern Syria. Questions also remain as to who will administer Raqqa once IS is expelled. Tillerson told reporters that the US is interested mainly in fighting IS now and does not want to get drawn further into the conflict between other groups in Syria. “Actors in Syria must remember that our fight is with IS,” he said. “We call upon all parties, including the Syrian government and its allies, Syrian opposition forces and coalition forces carrying out the battle to defeat IS, to avoid conflict with one another and adhere to agreed geographical boundaries for military de-confliction and protocols for de-escalation.”

But the outcome of the fight with IS may also open competition on other fronts. In Deir ez-Zor, for instance, if IS is defeated by Iranian-backed militias, control of the area could open an easy path for Iran into Syria, and then to Lebanon,the base of its ally, Hezbollah – an outcome that would likely inflame tensions between Iran and its proxies and US ally Israel. 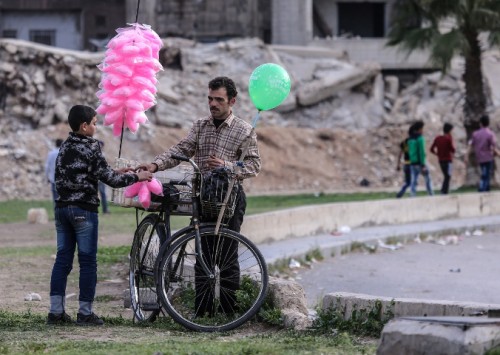 UN-Endorsed Ceasefire Lessens People’s Agony but Is Unlikely to End in Political Breakthrough
The United States and Russia, as members of the ISSG, agreed to enforce the ceasefire throughout Syria, effective 27 Feb...