Fanack Home / Syria / History of Syria from Past to Present / Aleppo, the Worst-Hit City in the Syrian Civil War

Aleppo, the Worst-Hit City in the Syrian Civil War

Aleppo, known in Arabic as Halab, is Syria’s second largest city in addition to being the country’s business capital. For centuries, Aleppo was one of the major cities of the Ottoman Empire, alongside Constantinople and Cairo. With a population of over 2 million, it was Syria’s largest-populated city before the dawn of the Syrian Civil War, which broke after the revolution of 2011. An ancient metropolis, Aleppo is one of the oldest continuously inhabited cities in the world. It is estimated to have been inhabited since the 6th millennium BC.

Historically, the city gained its significance due to its strategic geopolitical location at one end of the “Silk Road,” the trade route that connected China through central Asia with the Mediterranean through ancient Mesopotamia (Iraq today). However, upon the inauguration of the Suez Canal in 1869, trade routes shifted to the sea and the city of Aleppo started losing its significance. At the end of World War I and the subsequent fall of the Ottoman Empire, Aleppo lost its northern vicinity to what came to be modern-day Turkey, in addition to its main railway connections to Mosul, Iraq. Additionally, post-World War II, Turkey negotiated the successful acquisition of Antioch and the Sanjak (province) of Alexandretta, which the French had ruled since 1920 as part of its mandate over Syria, hence depriving Aleppo of its access to the sea. In 2006, the city was chosen for the title of the “Islamic Capital of Culture,” witnessing a wave of successful restorations of its myriad of historic, mainly Islamic, landmarks.

By the beginning of 2016, the battle has witnessed a severe intensification causing large-scale migration either to Turkey or to other less-hostile areas in Syria. Estimations suggest that the remaining population of rebel-held Eastern Aleppo has been reduced to 250,000, while regime-held Western Aleppo hosts 1.5 million. In early February 2016, the government’s military forces and their allies broke the rebel siege of two Shiite towns of Nubl and Al-Zahraa, which had lasted three years, by cutting off a main insurgent route leading to Turkey. Among other strategic towns that were recaptured by government forces in February 2016 were the towns of Mayer, Kafr Naya and Ratyan.

During the winter season, a war of attrition persisted with no clear-cut gains for any of the embattled sides. Nevertheless, on 25 June 2016, the regime and its allied forces started their North-West Aleppo offensive to cut the last supply route for rebels inside the city, the Castello highway, thus fully encircling the remaining opposition groups.

However, since the Battle of Aleppo started in 2012, the city has suffered massive destruction and has been the worst-hit city in the Syrian civil war. It is currently split between the government-held western part and the rebel-held east.

The “Battle of Aleppo” is an ongoing confrontation between opposition forces like the Free Syrian Army (FSA) and Sunni-hardline militant groups including the Islamic Front and a partial cooperation of the Army of Conquest (a joint command center of Islamist Syrian rebel factions known as Jaysh Al-Fateh), against the Syrian Armed Forces (or government forces) in alliance with Hezbollah, and other Iran-backed Shiite militias, the Russian Air Force and the Kurdish People’s Protection Units (YPG).

Aleppo has witnessed the fiercest battles between rebel groups and the regime forces, hence rendering it one of the most important battles of the Syrian Civil War. It has been marked by numerous human rights violations through the Syrian army’s indiscriminate use of barrel bombs, the purposeful targeting of civilians, including hospitals and schools, by the Syrian government and its Russian allies, and by the chaotic shelling by the rebels of government-held areas and civilians living there.

By the end of July 2016, the Syrian military had managed to completely surround Aleppo by stopping the last rebel supply line coming from the north. The government air-dropped thousands of leaflets asking residents to cooperate with the army and calling on fighters to surrender. This campaign, initiated by President Bashar al-Assad, came one day after the UN Syria envoy Staffan De Mistura said that the UN had hoped to restart peace talks in August of 2016. Previous attempts at a diplomatic solution to end Syria’s five-year-old civil war had collapsed in April 2016, partly due to an uptick in violence in Aleppo. A United Nations-backed truce declared by Russia and the United States in March 2016 had done little to stop the fighting.

Nonetheless, a few days after the regime forces cut their supply line, the Syrian rebels launched a broad counter-attack in the south of Aleppo, in a bid to both isolate the government-held side of the city and open a new supply line into rebel-held areas. After a week of raging fighting, rebels in and out of Aleppo advanced into the district of Ramouseh, which they captured by linking up from both sides.. They also seized the Al-Assad Military Academy, a campus for military training of the government’s forces in south-western Aleppo. The rebels then declared they had broken the Army’s siege of rebel-held east Aleppo by cutting the regime’s supply line into the western Aleppo area, held by the government.

But the regime forces were still hitting the new rebel supply line with air strikes. Both sides were besieged. This is a fundamental point to understand the battle of Aleppo: no one is laying siege to “Aleppo” as a whole; many different armed groups are laying siege to each other and to bits and pieces of it. The city of Aleppo, as well as the wider governorate, remain hugely fragmented.

In early September 2016, the Syrian regime conducted a series of offensives and started regaining territory. On the 4th, the Army managed to recapture the Armament, the Artillery, and the Technical colleges of the Military Academy, thus besieging the rebel-held Eastern Aleppo once again. In the week that followed, they reversed almost all ground gained by the rebels over the summer, including the strategic Ramouseh neighbourhood.

In late September 2016, the Syrian regime and the Russian Air Force launched a flat out bombardment of the city, an unprecedented attack in the six years of the Syrian civil war, which included the massive use of internationally restricted incendiary bombs. Half the casualties were children, targeted mainly through the indiscriminate bombing by Syrian and Russian aircrafts, according to Save The Children. The Russian and Syrian air forces were also accused by the United States of targeting hospitals and of conducting deliberate “double tap” airstrikes, by purposefully striking rescue workers and first responders rushing to a scene minutes after it was bombarded.

On 18 October 2016, the Russian forces and the Syrian government announced the suspension of the air campaign launched in September 2016 to allow evacuations of sick and wounded people in eastern Aleppo, but few heeded the call to leave. However, in late October 2016 and after the Army-initiated summer campaign had cut-off all rebel access to Aleppo, Jaysh Al-Fateh (the Army of Conquest) launched a military offensive named the “Battle of the Hero Martyr Abu Omar Saraqib” after the group’s general commander, who died in September 2016. The operation was aimed to establish a new supply line into Aleppo city and repulse Syrian regime forces on the western outskirts of Aleppo, but it slowed down three days later due to heavy government resistance. The momentum shifted towards pro-government forces who took back some of the southwestern areas of the city that the rebels had controlled since July 2016.

On 3 November 2016, in an attempt to revitalise the offensive, the rebels managed to turn back the pro-government attacks by launching a second phase against the Syrian Army positions in the western part of the New Aleppo district and in the Minyan district.

However, on 7 November 2016, the Syrian regime and its Russian ally replied by launching a massive counterattack on rebels in east Aleppo to take the city for good. Russia dispatched a military fleet of eight warships to the port of Latakia, including the country’s only aircraft carrier, the Admiral Kuznetsov, its biggest battle cruiser, the Peter the Great – both from Russia’s Northern Fleet – and the Admiral Grigorovich, a missile frigate. This fleet constituted Russia’s largest military surface deployment since the Cold War.

By 13 November 2016, the army had recaptured key areas including the western district of Dahiyat Al-Assad and the village of Minyan outside the city, according to the Syrian Observatory for Human Rights. The regime forces had also advanced south, seizing two areas from the rebels. The aforementioned reversals erased all progress made by the rebels during their offensive against the government’s siege on eastern Aleppo.

A few days later, the empowered Syrian regime rejected a United Nations proposal to end heavy fighting in the city of Aleppo by offering the rebels to maintain eastern Aleppo under the opposition’s control if their fighters withdrew. Syrian Foreign minister Walid Al-Muallem considered the idea a violation of “national sovereignty.” 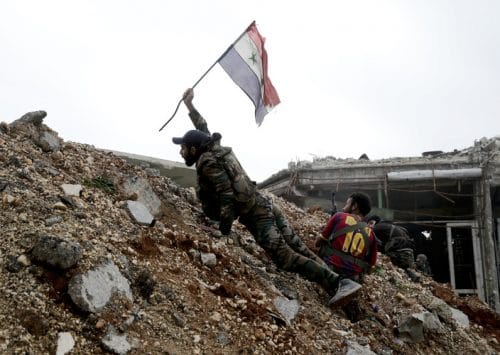