Fanack Home / Syria / History of Syria from Past to Present / Muted International Response to Air Strikes, Chemical Attacks in Syria

Air strikes by the Syrian regime and its ally Russia in rebel-held Idlib province intensified on 3 February 2018, after a Russian plane was shot down by opposition fighters. The air campaign, along with alleged chemical attacks by the regime, has created a dire humanitarian situation and prompted an outcry but little concrete response from the international community.

Turkey, which has been the rebels’ main external backer, is now focused on defeating Kurdish groups in the Syrian border town of Afrin. Meanwhile, the United States (US) and Europe have criticized the targeting of civilians but so far have taken no measures to stop it.

Idlib is one of the last remaining major population centres under rebel control and currently hosts thousands of displaced people from other parts of Syria as well as refugees who returned to Syria from Lebanon and other neighbouring countries.

Much of the province is under the control of Hayat Tahrir al-Sham(HTS), an extremist group consisting mostly of members of the former al-Qaeda affiliate Jabhat al-Nusra. This is since HTS emerged as the victor last year in a power struggle with Ahrar al-Sham, another rebel group that had formerly been its ally.

Idlib was one of the ‘de-escalation zones’ designated after the Astana talks between Russia, Turkey and Iran in 2017. At least initially, the zones appeared to be effective in reducing violence, but that effect now seems to have been temporary.

Some observers have opined that the zones were essentially a strategic stalling tactic by the regime, allowing it to focus its resources elsewhere while the ceasefire was in effect, and then to regroup and return to take the territory back. HTS, in any case, was not included in the ceasefire negotiations, and its strong presence in Idlib is likely a factor in the lack of international response to the Russian and Syrian offensive.

Russia and the regime launched a new offensive in Idlib in December 2017, which escalated after militants shot down a Russian plane on 3 February 2018. The Russian Defence Ministry said the pilot had been flying a monitoring mission over the de-escalation zone when the plane was shot down using a man-portable anti-aircraft missile. The pilot ejected himself and fought with militants on the ground before blowing himself up with a grenade to avoid capture, Russian officials said.

HTS took responsibility for the attack, with the group’s Ebaa News Agency quoting a commander as saying that they had shot down the plane with a shoulder-fired missile and that it was revenge for the ‘barbaric bombardment campaign’ of the city of Saraqeb. Russian politicians claimed that the US supplied the missile used to strike the plane, which US officials denied.

Syria’s state-run Syrian Arab News Agency reported that the Syrian army, along with allied forces, had regained control of more than 30 towns and villages in Idlib, Hama and Aleppo provinces ‘after eliminating the last gatherings of Daesh [IS] terrorists in them’.

But the offensive has come at a large cost to civilians. According to the UK-based Syrian Observatory for Human Rights, the aerial bombardment killed 241 civilians in the Idlib countryside, including 71 children and 46 women, between 25 December 2017 and 7 February 2018.

The UN’s Office for the Coordination of Humanitarian Affairs reported that at least ten health-care facilities had been attacked in Idlib between 29 January and 7 February 2018 as well as schools, markets, and water and sanitation facilities. Rescue groups, including the White Helmets, posted videos of civil defence workers evacuating patients from hospitals, pulling civilians from the rubble of collapsed buildings and fighting fires caused by the air strikes.

One man who returned to Idlib from the embattled town of Arsal in Lebanon with his family last year and is now in the town of Maarat al-Numan, told Fanack Chronicle that the bombardment has cut supplies of medicine, electricity and basic goods, and the UN has stopped its relief operations. Bombs have hit hospitals and displaced persons camps, he said. “The people here are just waiting to die,” he said.

“The aeroplanes are coming to hit us and we’re saying, oh Lord, our turn has come.” He said many people are running from place to place within Idlib to escape the bombing, while others have tried to flee to Turkey, Lebanon or Jordan.

Yet the border with Turkey is closed, and border guards have reportedly shot at refugees attempting to cross, according to Human Rights Watch. The passage into Lebanon is treacherous due to weather conditions in the mountains, where some refugees have died from exposure. The border with Jordan is also closed.

Rescue workers and rights groups have accused the Syrian government of targeting Idlib with internationally banned chemical weapons, including in a 4 February chlorine gas attack on Saraqeb that left 11 people in need of emergency treatment.

UN officials called the reports of chemical weapons use ‘alarming’ and warned of a ‘dire humanitarian crisis’ in Idlib and other areas of Syria where fighting has recently escalated. They also called for a one-month ceasefire throughout the country to allow humanitarian aid to get in.

US officials said they were ‘gravely alarmed by continued allegations of the use of chlorine gas by the Syrian regime to terrorize innocent civilians’ and called on the international community to ‘publicly pressure’ the Syrian government to stop using chemical weapons. However, the US has not threatened to take any action against the regime in retaliation for the alleged attacks.

And Turkey, distracted by its own controversial offensive in Afrin, has not responded strongly to the most recent attacks in Idlib, even though Turkey had previously accused Russia, Iran and Syria of violating the Astana agreement. Turkish forces have been setting up observation posts in Idlib – one Turkish soldier was killed and several wounded on 5 February 2018 in a mortar attack while setting up such a post. It remains unclear who launched the attack.

Charles Lister, a senior fellow with the Washington-based Middle East Institute, wrote that the escalating violence in Idlib and lack of an international response may herald the effective end of the de-escalation zones.

‘Russia’s de-escalation zones are now crumbling, as all major actors inside and outside Syria now seek to define the terms of the “post-IS” reality,’ he wrote. ‘Without major international effort, further regime chemical attacks, indiscriminate bombing and the targeted destruction of civil facilities are likely to continue unabated.’ 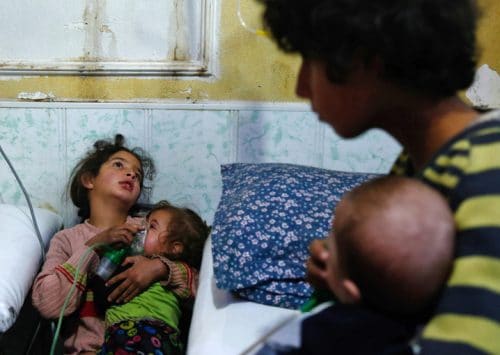 Alleged Chemical Attack in Syria Puts the World on Edge
The situation continues to be volatile, leaving the world and especially Syria and its neighbours on edge, fearing for t...