The Geneva II Middle East peace conference is a series of rounds of international negotiation supported by the United Nations and aimed at ending the Syrian crisis that has continued since the outbreak of the revolution against the ruling al-Assad regime in Syria, in 2011. Geneva II focuses on bringing together the Syrian regime and the Syrian opposition at the same table to find a peaceful solution to the Syrian crisis and creating a transitional government to manage the country until free elections can be held and a new Syrian government formed.

Purpose of the conference

The first round of Geneva II talks began in Montreux on 22 January 2014 and took place in Geneva from 23 January 2014 through 31 January 2014. A second round was held from 10 February through 15 February 2014 in Geneva. Geneva II springs from an international understanding reached in Geneva I, which can be summarized as the adoption of a nonmilitary solution to the Syrian crisis and the ending of the violence. Work began to form the new Syrian republic and implement the Geneva Declaration issued by the Action Group for Syria on 30 June 2012, declaring that any political settlement of the Syrian crisis must include a transition period.

The main steps of the transitional stage to be as follows:

Eventually, it was necessary to press the two major conflict parties in Syria, the regime and the opposition, to engage in dialogue. In December 2013, United Nations international envoy Lakhdar Brahimi announced the list of countries participating in the Geneva II talks. The US and the Free Syria Army rejected any Iranian participation in Geneva II talks, which forced UN Secretary General Ban Ki-moon to withdraw the invitation to Iran to attend the conference, particularly because Iran did not support the agreement reached in Geneva I concerning a peaceful political transition in Syria.

During the Geneva II talks, each of the participating parties expressed its point of view regarding the conference’s agenda, and Brahimi played a prominent role in trying to find common ground to settle the dispute. While negotiations early on discussed two major points—“terrorism” and the transitional government—the two parties disputed many other points, including the Syrian regime’s announcement that it would not “hand over power to any side”. The Syrian foreign affairs ministry stated that the Syrian president, Bashar al-Assad, sent his representatives to Geneva in order to “fulfill the Syrian people’s demands, the first of which is eliminating terrorism” in a way that doubts the honesty of the field activity of the opposition. The statement criticized the stances of England and France, as they announced that al-Assad could have no role in the future of Syria. Al-Assad had stated in an interview three days before Geneva II that he would probably run for a third presidential term in the coming elections, thus rejecting the idea of sharing power with the opposition.

Negotiations ended without reaching an agreement or even a mutually agreed statement. Eventually, dialogue sessions were suspended, and Brahimi’s “apology” to the Syrian people was considered an official announcement of the failure of Geneva II. In addition, international humanitarian and human-rights organizations issued reports showing that terrorist acts in Syria resulted in the death of approximately two thousand people during the days of the conference; this exacerbated its failure in the eyes of the Syrian people and world public opinion.

Observers held that the most important reasons behind the failure of Geneva II include the lack of development of any international and regional settlement on Syria, the continuous international support of the conflicting parties by supplying them with weapons, ammunition, and training, and the fact that the Syrian regime is convinced that it’s winning the fight against the opposition.  While the Syrian opposition demanded that al-Assad step down of and that a transitional governing body be formed as a way out of the bloody crisis, the regime replied that these calls were nothing but illusions in conjunction with a call for taking comprehensive international measures to face “terrorism”. The best result reached at the conference was the agreement to deliver humanitarian aid to several towns and cities under siege and to release some detainees and prisoners.

The lack of progress in the negotiations led to spreading conflict in Syria, and the pace of violence increased through the regime’s use of warplanes, heavy artillery, and barrel bombs against residential cities and neighborhoods, and the increase in the number of deaths and injuries, along with violent attacks by regime forces and its alliances including Hezbollah, the Abu al-Fadl al-Abbas Brigade, and others on the fronts in Qalamoun, Homs, Halab, Hama, rural Damascus, Daraa, and other places. This development made some believe that the regime currently dominates the battle and can bring it to an end in its favor. Despite the belief of the great powers, including the US, that the Geneva II talks are “the best opportunity for the Syrian opposition to accomplish the goals of the Syrian people and revolution”, achieving tangible progress is very difficult, because the two parties have totally contradictory goals. The Syrian government reiterated that the issue of al-Assad leaving power is not negotiable, while the opposition coalition stresses that al-Assad should have no role in the transitional governing body stipulated in the Geneva I declaration. Another major problem is that rebels are structurally divided in their goals, in that the powerful extremist groups are fighting not for democracy but for an Islamic state in Syria or even in a greater Syria, al-Sham, including parts of Iraq, Lebanon, Israel, and Palestine.

A third round of the Geneva II conference is tentatively planned to be held at an unspecified date, but the chance of holding such talks remains slim, given the present situation. National Reconciliation Minister Ali Haidar said, several days before the Geneva II conference, “Do not expect anything from Geneva II.  None of Geneva II, III, or IV will solve the Syrian crisis. The solution started and will continue through the military victory of the state”. Rebel forces at the same time are convinced that they will win. 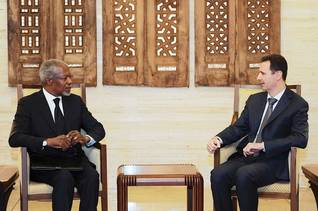