Fanack Home / Syria / History of Syria from Past to Present / In War-ravaged Damascus, Residents try to maintain Level of Normalcy

In War-ravaged Damascus, Residents try to maintain Level of Normalcy

Mohamed sells orange juice on the street just outside Souq al-Hamadeya in the Syrian capital Damascus, an area where mortars landed almost daily during the regime offensive against opposition-held East Ghouta in early 2018. Yet he has not considered staying at home or finding a different place to sell his wares. “If we were afraid everything would stop, the city would sleep. We cannot do that, life must go on,” he told Fanack Chronicle.

The civil war has always been around the corner in Damascus. In 2012, the armed opposition took control of several suburbs including Eastern Ghouta, a rural area encompassing several towns and villages about 15km east of the city. Ever since, regime-held Damascus has been under frequent mortar and artillery fire from opposition fighters.

In February 2018, the regime, with Russian air support, launched a major offensive against the different opposition groups in Eastern Ghouta, mainly Jaysh al-Islam, Ahrar al-Sham and Falaiq al-Rahman. An estimated 200,000-250,000 civilians were trapped, in part because opposition snipers prevented them from fleeing. After almost two months of bitter fighting, the enclave came under full control of the regime on 12 April. The Syrian Observatory for Human Rights puts the civilian death toll in Eastern Ghouta at over 1,600, but a foreign analyst who spoke to Fanack Chronicle on condition of anonymity said that with women and teenagers in the enclave also carrying weapons, the distinction between civilians and fighters was not always clear.

For many Syrians in regime-controlled Damascus, the fall of Eastern Ghouta came as a relief, not least because shelling increased sharply during the offensive. While not proportionate to the suffering of civilians in Eastern Ghouta under regime bombardment, this shelling also caused almost daily fatalities and managed to keep the entire city in the grip of war. For instance, a mortar hitting a market in the neighbourhood of Jaramana killed 44 on 21 March 2018.

“Safe? There is no safety here,” said Girgis, a resident of Dwela, a neighbourhood about a kilometre from the frontline, at the height of the offensive in mid-March. “Yesterday, there was a mortar close by, my sister and her daughter moved out to another place because they are afraid.”

Walking around in Dwela, it was not hard to miss the signs of mortar fire. Shrapnel had damaged a school and multiple houses had holes in their walls. In one place, local volunteers, organised in pro-government national defence units, were cleaning up the rubble from a mortar attack the day before. One resident showed wounds all over his body sustained during an early attack.

Mona, an Iraqi refugee residing in Jaramana, told Fanack Chronicle that her daughter was afraid to go to school after it was hit by a mortar. Her husband had lost a friend and been injured himself in a mortar attack in 2012. The family had been forced to move several times within Damascus to flee the fighting between opposition groups and the regime forces. “Terrorists attacked our neighbourhood, our house was hit by bullets,” Mona said.

Taxi driver Khoury has a comparable story. He fled his village in the south of Syria when the extremist group Jabhat al-Nusra took control it in 2012. In Damascus, he landed in Ain Terma, an area he had to leave again when an opposition group from Eastern Ghouta took over.

Over ten days in March 2018, Fanack Chronicle recorded tens of stories of Damascus residents recalling mortars that had landed close by, claimed casualties or damaged houses. The general feeling was that people were tired of the war and hoping that President Bashar al-Assad would retake Eastern Ghouta soon.

“Not many people are pro-Assad, but they are anti-opposition,” Anas Joudeh, a member of the regime-allowed opposition, told Fanack Chronicle. “People rejected the model that was presented to them by the opposition. For me, the peaceful uprising finished when people started to carry another flag. I believe in an uprising within the state, but I don’t want to destroy everything. I want to keep my country,” he explained.

Despite the ongoing sound of shelling, a large military presence in the streets and constant danger of mortars, there is a surreal sense of normalcy to life in Damascus. In recent years, a lot of bars, restaurants and clubs have opened. Sitting in their shisha cafés, customers no longer even blink when a large explosion is heard in the vicinity. The streets are more crowded than before the war, due to the influx of the internally displaced. Government services such as garbage collection, electricity and water are still functioning. The regime seems to want to send the message that as long as it is in control, it will provide a level of safety and normality to its citizens.

But certain sectors have suffered greatly. “Many doctors have fled the country and sanctions make it more difficult to import medicines,” Umm George, another Dwela resident, told Fanack Chronicle. She fell down the stairs several months ago and has difficulty walking. “I cannot get good treatment,” she said.

The effects of the war on the economy have also been devastating. A simple pizza cost 10-15 Syrian pounds in 2010; now it is 100 Syrian pounds. The currency has lost ten times its value since war broke out in 2011. Hard numbers are lacking, but in mid-2017, the World Bank estimated a cumulative GDP loss from 2011 onwards of $226 billion, four times Syria’s 2010 GDP. A UNDP report estimated the cost of destroyed physical infrastructure at $67.3 billion at the end of 2015 – only halfway through the war.

Millions of Syrians have fled the country, and in Damascus it was hard to find anyone without a family member in Europe. Umm George hopes to be reunited with her family in Germany, as she does not expect living standards will improve in the near future, even if al-Assad secures a quick victory.

Mahmoud, a 19-year-old college student, wants to leave Syria once he graduates, to avoid military subscription. “In the army you get killed,” he said bluntly. His brother already lives in Europe. He travelled to Turkey first, took a boat over the Mediterranean to Greece and then went through the Balkans to Germany.

While Damascus residents hope for quieter and more peaceful times after the fall of Eastern Ghouta, they remain fearful about the future of their country. “With all the talk against Iranians in Syria, we may witness something bigger soon,” Joudeh said, referring to international opposition to the presence of Iran and Iran-backed Hezbollah in Syria. With the United States (US) supporting the Kurds in the north-east, Turkey supporting the opposition in Idlib in the north, and Russia and Iran supporting the regime, Syria continues to be a geopolitical powder keg. Moreover, although al-Assad continues to regain territory, the situation remains highly volatile.

The US, France and Britain hit multiple regime targets in Damascus and Homs on the morning of 14 April 2018 in retaliation for a suspected chemical attack by the Syrian army in the city of Douma a week early.

The US and Russia traded military threats following the chemical attack, sparking fears of a wider escalation between the superpowers, but in the end the strikes were limited, which appears to have further boosted al-Assad’s confidence.

*All interviews were conducted without the presence of a third party, they were solely between the reporter and interviewee. 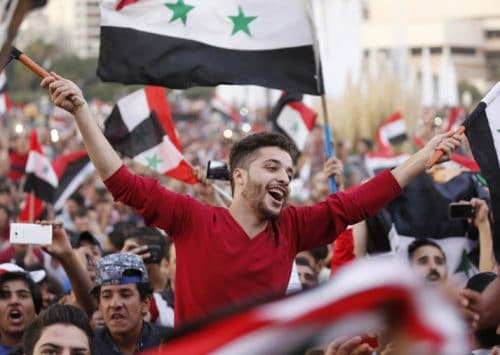 As War Winds Down, A Semblance of Normal Life Returns to Parts of Syria
Even as the war appears to be winding down, 6.5 million people remain internally displaced  and more than 5 million liv...