Over the past four years from 2011, the Syrian regime has lost control over almost two thirds of the country’s land to its opponents. Assad in March 2015 entirely controls the provinces of Tartous (coast), Sweida (south) and the heart of Damascus, while he shares domination over the rest of Syria’s provinces with different opposition forces at various percentages. According to the French expert Fabrice Balanche the Syrian regime controls 55 to 72 percent of the population (which numbered in 2011 23 million people).

Inside the regime’s territories, life looks more normal than in the opposition-held areas. However, one cannot help noticing the high population density. As the opposition territories have been under Assad’s continual siege and shelling, hundreds of thousands of civilians have fled those regions seeking the relative safety of the Assad’s land. However, the normality of life here is seemingly nothing but a façade that hides numerous hardships, challenges and risks.

The severe scarcity of electricity is probably the least to talk about. Although there is a little more electricity in Assad’s Syria than in the opposition-held areas, people here suffer every day from 12-20 hours of power outage. Many of the country’s power plants and networks have been damaged by the chronic violence, and Syria is suffering a sharp shortage of the fuel needed to operate the remaining power stations.

Supply of basic commodities has plunged, as Syria’s local production and transportation networks have been severely damaged. The four-year-old international economic sanctions on the country have made things only worse. Walking the streets of Damascus, for instance, one can easily notice the long lines of cars waiting at the few gas stations which still function. People are striving to secure a few liters of gasoline or diesel. This lack of fuel has also affected the public transportation network, which, in turn, has become far from meeting the needs of the population. Cooking gas, heating oil, bread, medicine and many other basic commodities have become hard to secure.

Lack of supply as well as the damage sustained by the economy and the collapse of the Syrian Pound have all driven prices skyward, by up to 500% in some cases. According to residents, prices of commodities have also been greatly manipulated by “greedy traders,” amid a complete absence of government control.

For the same reasons, unemployment has grown to almost 40 percent of the labor force in the regime’s areas, according to economist Sameer Seifan. The influx of displaced people from the rebel-held regions has multiplied the demand on jobs. While a portion of the population is lucky to have relatives abroad helping with money transfers, others strive to make ends meet. The streets of the regime-controlled cities have become dotted with beggars and entire families are living in public parks and on sidewalks.

Another hardship is to move around. In addition to the high density of population, the too many security checkpoints here are causing horrible traffic jams. They take their time checking every car and each passenger. A trip that used to take 10 minutes before, now takes up to two hours, you spend most of which waiting in a long line of cars at one or more of those checkpoints.

Targets of the regime

But when it comes to security checkpoints, traffic and time is actually the least people’s worries. Going through a regime forces’ checkpoint means the risk of arrest, forced disappearance and possibly execution or death by torture.

“Assad’s troops at checkpoints harass people and look for any sign that you are against the regime or have empathy towards the opposition, so that they take you down,” a bus driver in Damascus said. “Being from an ‘anti-Assad region or neighborhood’ is enough reason for them to start harassing a person. And in most cases the person is arrested.”

On top of the list of targets at the regime’s checkpoints are young men who have not reported to the military service, which has become a main concern for the families living in the regime’s territories. Thousands of Syrian young men have been killed in the fight against the different rebel forces in different parts of Syria. Many Syrians now believe that sending their sons to the fight means sending them to their death. Therefore, they strive to send them abroad at any coast, whether in legal or illegal ways. Those who have not managed to flee the country, have to be especially cautious when moving around, avoiding the checkpoints and paying bribes to be temporarily spared.

“I don’t let my sons go out unless it is an emergency,” says Abu Samer, owner of a garment shop in Damascus and father of four, two of whom are at the conscription age. “Whenever someone knocks at my door I panic, thinking it could be the security forces coming to pick my sons.”

For Syrians, it seems that the concern of the conscription overweighs all other hardships. “When I think about this issue, I forget about all the problems of electricity, fuel, prices, lack of business..etc. I am willing to pay all what I have to find a way to get my sons out of the country.”

Despite the heavy security and military presence inside the regime-controlled areas, security does not seem to be doing well. Statistics show a sharp increase in the incidents of abduction for ransom: the Syrian al-Iqtisadi magazine estimates that 18,000 Syrians were kidnapped for ransom in 2014. Moreover, several radical Islamic groups have succeeded many times in hitting the heart of the regime’s areas with car bombs killing many civilians.

In addition, people living under the regime’s rule are also under risks that no security checkpoints can prevent. Every day, Assad’s areas are shelled with mortars from the next-door rebel-held neighbor-hoods, according to local sources.

You can easily discern fear and desperation in the faces of people here, especially when they tell their stories. However, they seem today more used to the suffering. They are trying to adjust to the new situation, with no clue of what might happen next.

“In the beginning, people panicked every time a mortar shell fell close to them. You would see no one passing by the targeted areas maybe for days,” Muhannad, a physician who owns a clinic in Damascus says. “Today, people seem to don’t care much. They have grown used to the car bombs, mortars and death. As soon as the wreckage from an explosion is cleaned up, you see the same spot crowded again.”

Dr. Muhannad is the only member of his family who stayed in Syria. His three brothers have managed to make it to Europe and take refuge there, each in a different way. He believes that the emotional and psychological impact of the events in Syria has been greater than the material effect. “What is happening here has made a huge crack among Syrians,” he says. “People don’t trust each other anymore, and there is a prevailing feeling of loneliness. Many have lost one or more of their beloved ones in this war. Others long for their beloved ones who have left the country, and they have no idea if they are going to see them ever again.” 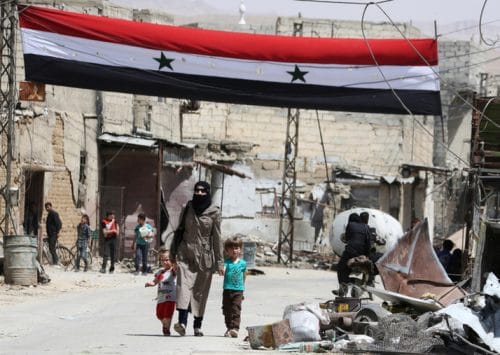