It has become difficult in 2019 to verify or explain the situation in Yarmouk refugee camp, south of the Syrian capital Damascus, based on the details, figures and information available. This is largely due to the lack of sources as a result of the small number of residents who have remained in the camp over the past year. The Syrian regime has now completely closed the camp and moved the remaining residents out, according to a woman who used to live on the camp’s al-Maliki Street.

“The regime has completely closed the camp and denied entry into or exit from the camp, effective the end of February 2019,” said the woman, who spoke on condition of anonymity. “The regime claims that the infrastructure of the camp does not help have a viable accommodation because there are no electricity, water or sewage systems, and the camp should therefore be destroyed completely and rebuilt.”

Some 60 percent of the camp’s residents were displaced following the regime bombing on 16 December 2012 that targeted Abd al-Qadir al-Husayni Mosque and al-Fallujah School after the camp came under the control of armed groups affiliated with the Syrian opposition. The remaining residents left after the Islamic State (IS) seized the camp on 1 April 2015. The subsequent military operation launched by the regime to retake the camp destroyed 60 percent of the houses and left 31 civilians dead and scores of others wounded, according to reports documented by the Action Group for Palestinians of Syria.

However, the actual situation in the camp remains unclear. The residents have demanded that they be allowed to return to their houses, most of which have been reduced to rubble. The regime has refused the demand and continues to make promises about reconstruction, so far with few results.

Since the last battles in April 2018, which ended in victory for the regime, the camp has been directly run by the Damascus Governorate, unlike in previous years when it was run by its Palestinian residents. In theory, the camp is currently under the military control of the regime. In reality, however, it is controlled by three different groups. The first is regime forces, the second is the Popular Front for the Liberation of Palestine – General Command (PFLP-GC), a nationalist militant organization that is close to the regime, and the third is pro-regime shabbihah (thugs; a derogative reference to militias affiliated with the Syrian government).

According to Ala Abbud, a Palestinian lawyer and human rights activist, the camp has been like this since May 2018, and it is still “closed” to the residents wishing to return, on the grounds that the government is “implementing a plan to clear and renovate the camp and move the rubble out”. The clean-up and reconstruction are run by a Palestinian-Syrian committee supported by the Palestine Liberation Organization (PLO), an umbrella political organization. The majority of the committee members are from the PFLP-GC and PLO factions that are authorized to work in Syria. They are all close to the regime and operate under its command.

“Entering the camp requires high-level security clearance or passes, and if obtained, one cannot stay inside the camp, especially with the lack of public services such as transportation, shops, drinking water and sewage, and because of the limited hours of power supply,” Abbud said.

According to information provided by the Action Group for Palestinians of Syria, ‘this is a normal situation if we know that the camp has been destroyed by up to 80 percent and that more than 50 percent of the camp’s houses have become a relic’.

Since the regime’s recapture of the camp in February 2019, the residents have been divided into two groups: one that has security clearance or passes to enter and exit the camp to buy humanitarian supplies, the other that does not have security clearance and suffers from the lack of shops, communications, doctors and pharmacies. In a health emergency, most of those inside the camp would not survive or would have to endure a long wait before receiving permission to travel to Damascus.

The conditions in the camp motivated volunteer teams to remove the rubble and recover some of the bodies. These activities have remained small in scope, however, despite the huge rehabilitation requirements, especially given the camp’s size – 2.1 km2 – and once high population density.

Since the destruction of large areas of the camp, tens of thousands of people have been either displaced to Damascus and other Syrian cities or left the country altogether. All of them are waiting for the delivery of unclear promises regarding reconstruction and compensation from donor countries and the Palestinian Authority in the West Bank.

The wait could be a long one, which prompted some families to stage protests outside the camp, according to Abbud, who confirmed that the last demonstration was held in mid-2018. In early February 2019, a delegation from the camp submitted a petition to Damascus Governor Adel Anwar al-Allabi.

According to the Action Group for Palestinians of Syria, the petition had approximately 3,000 signatures and ran to 200 pages, in which the signatories demanded their immediate return to the camp whether its infrastructure was rebuilt or not. The signatories confirmed that displaced residents with few financial resources were willing to undertake voluntary civil work and rebuild their houses with their own hands.

These demands to return indicate that residents have lost hope in the promises made by the regime and its institutions to rehabilitate the camp. This is in addition to the difficult economic situation of the residents, most of whom have lost their sources of livelihood and are unemployed. Once home to 150,000 people and dozens of businesses, the camp was tantamount to a large shopping centre for Damascenes.

The situation in the camp is similar to several other areas south of Damascus, such as Tadamun, Hujayrah and Yalda, which have also suffered widespread destruction. However, it is different from that of the neighbourhoods of Qadam and Asali, which have new organizational charts and private companies that are working to resolve pending administrative issues and oversee the reconstruction. Yarmouk’s residents may be wise to wait for their own organizational chart in order to have the camp rebuilt by private companies under the regime’s command. 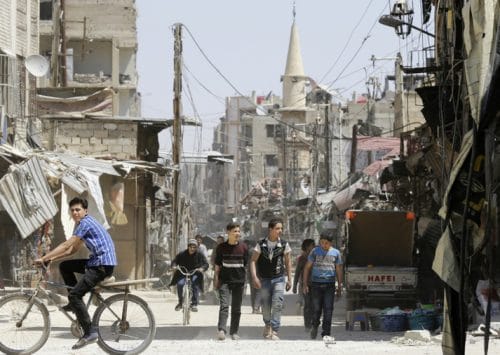 In Syria, New Decree could strip Refugees and Internally Displaced of Homes, Belongings
The decree does not specify where the regulatory zones will be. However, given that a majority of those who fled their h...