As the Turkish attack on north-eastern Syria began on the afternoon of 9 October 2019, with air strikes in and around the city of Ras al-Ayn, another enemy reminded the Kurdish-Arab forces of the Syrian Democratic Forces (SDF) that it has not been fully defeated: the day before Turkey launched its offensive, the Islamic State (IS) carried out an attack in Raqqa, the caliphate’s former capital.

What anybody familiar with the region has known all along, namely that a Turkish attack would trigger disaster in assorted ways, started to become reality when US President Donald Trump announced that US troops will no longer stand in Turkey’s way.

The full withdrawal of US troops from territory east of the Euphrates River is not a policy change. Trump made the announcement in December 2018, eliciting a response so fierce that he decided to keep some troops stationed there anyway. This was crucial to prevent a Turkish attack, since both Turkey and the US are NATO members, making the presence of US soldiers an effective bulwark.

Trump has now had enough, saying it is time for others to take responsibility.

It is not so much that Trump is fulfilling his election vow to pull US troops from Syria that is concerning. It is the way he is doing it: without any apparent strategy, without any protection for the forces the US army has been cooperating with in the war against ISIS since 2014 and without any concern for the rights of Kurds (and other minorities) in a post-war Syria. This leaves the Kurdish People’s Protection Unit (YPG) and the SDF highly vulnerable. And it leaves the local population open to ethnic cleansing.

The north and north-east of Syria has been controlled by the YPG since 2012, when Syrian President Bashar al-Assad withdrew from that part of the country to concentrate on other fronts. The YPG and its political ally, the Democratic Union Party (PYD), have since been working to implement what they call ‘democratic confederalism’, a decentralized system of governance in which people govern themselves at neighbourhood and village level. Women have equal representation, and the rights of ethnic, religious and linguistic communities are fully respected. Besides Kurds, the region is inhabited by Arabs, Armenians, Assyrians, Turkmen and others.

Turkey has been concerned about this semi-autonomous entity on its border ever since started to emerge. This is because the PYD and YPG adhere to the same ideology and have the same ideological leader (Abdullah Ocalan) as the Kurdistan Workers’ Party (PKK), the armed Kurdish group that has been at war with Turkey since 1984. Turkey considers the PKK a terrorist organization and so, by extension, the YPG and PYD. Even though the YPG and PYD operate strictly within Syria and have never attacked or threatened Turkey with military action, the Turkish government has successfully convinced its friends in the international community that the SDF-controlled areas in Syria constitute a threat to Turkey’s safety.

The SDF, to complete the picture, was founded in October 2015. It is a joint Arab-Kurdish force of which the YPG is a part, set up to drive IS out of its territory in Arab-majority cities and regions, like Deir ez-Zor, Minbij and Raqqa, in coordination with the international coalition led by the US. Turkey also considers the SDF to be a terrorist organization.

This is not the first time that Turkey has invaded Syria. In the summer of 2016, it entered the territory west of the Euphrates. This was to prevent the SDF from connecting several areas under its control, namely Afrin in north-western Syria and the ‘cantons’ of Kobani and Jazira (with Qamishlo as the biggest city). The second incursion came in January 2018, when Afrin itself was invaded. Turkey has occupied Afrin ever since.

It is the situation in Afrin that offers an insight into what could await the Syrians living along the Turkish border. The Turkish army and its auxiliaries – a mixed company of jihadists and other ‘rebels’ – have violated human rights on an immense scale: the Kurdish population has been displaced and their houses and farms taken over by Arabs (who have mostly been displaced from other parts of Syria), there has been looting, torture, murder, disappearances and ‘Turkification’ of the area. Given Turkish President Recep Tayyip Erdogan’s plan to resettle Syrian refugees from Turkey in north-eastern Syria, demographic change is almost inevitable as well.

The plight of the local population has largely been overlooked by analysts who focus on maps of the region with assorted colours and lines to indicate who will control which swathes of land after the Turkish army illegally crosses the Syrian border – international law does not allow the invasion of another country without consent of the sovereign authorities of that country or without a green light from the United Nations.

The local administration has already issued a statement, calling on people to gather in border areas and ‘carry out acts of resistance during this sensitive historical time’. Some residents will probably flee when the invasion advances, most likely to Iraqi Kurdistan, unintentionally helping Turkey’s plan to change the region’s demographics.

But few people believe Turkey will leave it at that. At last month’s UN general assembly, Erdogan explicitly said and showed that he not only intends to seize an almost 500km strip of land extending 30km into Syria but could make it as far as Deir Ez-Zor and Raqqa.

At the time of writing, the first two civilian deaths had been reported. Turkey has called the offensive ‘Baris Pinari’: Fountain of Peace. 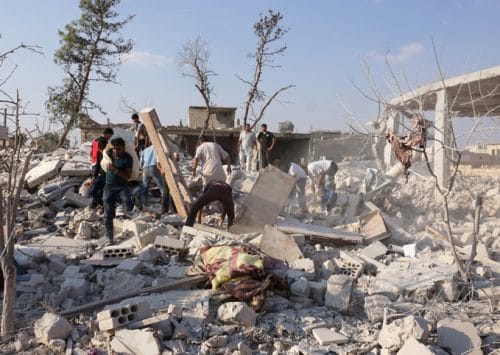 Could Idlib Takeover Spell the End of Former al-Qaeda Affiliate in Syria?
The losses under Russian bombardment have added to HTS’ recent woes, which include a string of assassinations and defe...