Fanack Home / Syria / History of Syria from Past to Present / In Syria, Israel and Iran’s Conflict is Escalating

In Syria, Israel and Iran’s Conflict is Escalating

The Israel military forces said that an overnight operation on 20-21 January 2019 targeted the elite Quds Force of the Iranian Revolutionary Guards and Syrian air defences near Damascus in Syria. This is the latest move by Israel against Iran in Syria since the beginning of its involvement in the conflict.

The Israeli strike, according to IDF spokesman Lt. Col. Jonathan Conricus, targeted munitions depots, intelligence sites, a training camp and more, as well as Iranian warehouses at the Damascus International Airport and Syrian anti-aircraft batteries when those batteries fired dozens of missiles at Israeli aircraft carrying out the strikes. Israel relayed a message to Syria that the military was only targeting Iranian forces and warned Syria not to fire at Israeli jets. It killed 11 Iranian and pro-regime fighters.

Israel’s President Reuven Rivlin said on 21 January 2019 that the attacks were in response to a surface-to-surface rocket that Iranian forces fired towards Israel a day earlier. During a meeting with Ukrainian President Petro Poroshenko in Jerusalem, Rivlin spoke about the raids, calling them “a direct response to the unacceptable missile fire on us”. He added, “The international community must understand that the build-up of Iran’s forces in the Middle East could lead the region into escalation.”

Professor Nikolay Surkov, from the Moscow State Institute of Foreign Affairs, told al-Jazeera that air attacks in Syria by Israel’s air force are likely to intensify: “The Israelis will attack. They are convinced that the Iranians are advancing, that they are providing high-powered weapons to Hezbollah. The Israelis definitely think they must do something.”

The Israeli military forces rarely admits carrying out attacks inside Syria. But it announced the start of the recent strikes on the Quds Force in a tweet. It is the most direct, deadly and clear attack by Israel against Iran since the beginning of their so-called ‘proxy conflict’ in 2005. The conflict is bound up in Iran’s declared aim to dissolve the Jewish state and Israel’s goal to prevent Iran from acquiring nuclear weapons and downgrading Iranian allies such as Hezbollah, a powerful Lebanese political and militia group at war with Israel.

According to Ofer Zalzberg, the International Crisis Group’s senior analyst for the Middle East, “Since February 2018, the Israeli-Iranian conflict visibly is no longer ‘cold’, with the two countries exchanging direct blows over Iran’s efforts to establish a permanent military presence in Syria.” He added to Fanack, “The recent exchange of fire reflects a signalling of seriousness by both Israel and Iran. Israel signals that it would remain assertive even after the withdrawal announcement. Iran signals that it will not tolerate Israeli strikes within Syria and that it will fire at Israel in such cases.”

Iran and Hezbollah have been supporting Bashar al-Assad‘s regime in the Syrian war, and Iran is a long-term enemy of Israel, which is feeling threatened by alleged Iranian nuclear weapon plans. Russia is also allied with the Syrian regime, which it has been supporting since 2015 by helping to regain territories seized by Syrian rebels. Israel is worried about Iranian and Hezbollah activities in Syria, especially since the Syrian regime regained Daraa, an opposition stronghold that brought Syrian forces close to the Israeli-held section of the Golan Heights. The Golan Heights were seized from Syria in 1967 during the Six-Day War between the Israeli and the Arabs.

At the beginning of October 2018, Russia equipped Syrian air forces with the S-300 missile system, including four launchers, locators and control vehicles, after blaming Israel for the death of 15 Russian soldiers during an air strike targeting a Russian plane.

This has served to ramp up tensions, with deadly direct attacks. “This type of signalling with missiles has a potential for escalation because it requires delicate brinkmanship,” Zalzberg told Fanack. Israel used to deny direct military implications in Syria, which is no longer the case. “This hiatus in ambiguity serves both Israel’s objective of demonstrating to Iran that in spite of the US withdrawal announcement, Israel is no less committed to preventing Iranian permanent military presence than it has been, perhaps more. It also serves [Israeli Prime Minister Benjamin] Netanyahu’s electoral objectives, against accusations by his adversaries from right and left that he mismanaged the relationship regarding Syria with the US and Moscow.”

According to Jonathan Marcus, a diplomatic correspondent for BBC News, “The strategic context on Israel’s northern border is changing. All the major actors are trying to influence the new rules of the game. President al-Assad has survived; in large part due to Iranian support. President Trump is pulling out US ground forces from Syria. And Russia, which also backs Mr al-Assad, is eager to put its diplomatic stamp on future developments. It is this new context that – in part – explains Israel’s greater willingness to speak publicly about its air campaign.”

He added, “The strategic dialogue between Israel and Russia continues at a high level. Only last week senior Russian officers were in Israel for talks. But Russia has not persuaded the Syrians to remove or contain Iran’s growing presence. Israel’s war of attrition is set to continue. But the firing of a missile from Syria, which prompted an additional wave of Israeli strikes, shows just how dangerous things are becoming.”

In all this, Russia has deployed some of its best air defences in Syria to keep US missiles and jets at bay as the US’ immense air and naval power fought Islamic State close by. This is clearly not effective when the Israeli military forces puts its mind to targeting Syria. “Russia currently plays a balancing role, trying to shape the scope and nature of the Israeli-Iranian exchange of blows rather than to end it,” Zalzberg said. “Its main aim is to limit the harm caused to Syria from the Israeli-Iranian conflict.”

This aim may be failing as the growing risk of a military escalation between Israel and Iran puts Syria in the middle of an increasingly international battlefield. 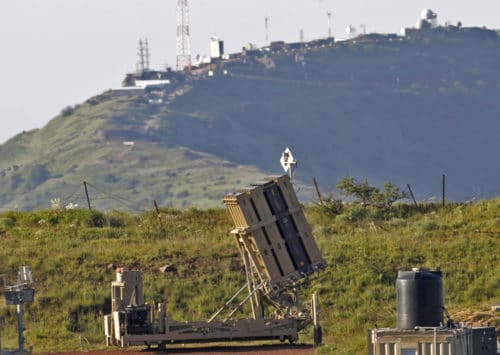 Russia is trying to limit Israeli Military Activities in Syria
An agreement to limit the influence of Iran in Syria could be the key for pacifying the current situation. However, an i...