Fanack Home / Syria / History of Syria from Past to Present / In Syria, Lack of International Recognition for Raqqa’s Civilian Administration Hampering Reconstruction

On 17 October 2019, it will be two years since the Syrian Democratic Forces (SDF) declared victory over Islamic State (ISIS) in Raqqa, which since 2014 had been the capital of the self-proclaimed ‘caliphate’. Tens of thousands of people who left the city before the final battle have now returned. But life is far from easy: most of the buildings are in ruins, there is no electricity and IS sleeper cells still pose a threat. Crucially, a lack of international recognition of the city’s civilian administration is hampering reconstruction.

The predominant colour in Raqqa is grey. Grey is the colour of destruction, the colour of bomb-blasted walls and of collapsed roofs that hang suspended like curtains. Anything that had colour in the destroyed buildings – carpets, furniture, personal belongings – are covered with a layer of grey rubble and dust.

Conversely, wherever people are working to improve life, bright colours are appearing. Businesses selling building materials have mushroomed, and basins and toilets are stacked on the pavement, white and gleaming in the sunlight. Pots of paint stand alongside heaps of wood, sacks of concrete and rolls of cable. The city centre is bursting with bright shades: pink, purple, red and orange children’s bikes and toys, red, yellow, blue and gold lengths of cloth for women’s clothes – not many people want black anymore, one shopkeeper explained – and gaudy shop signs.

Overriding all of this is a feeling of energy and the residents’ intense desire to rebuild their lives: to lay a wall, drive in a nail and hang a new door in its frame.

But if the will to rebuild is so strong, why is some 80 per cent of the city still inhabitable? The immediate problem is a lack of money and a lack of homeowners. Most of those who fled before ISIS seized control in 2014 have started new lives in Turkey or Europe, or died trying to get there.

Without the owners, it is hard to remove the rubble and rebuild, even though the municipality has come up with a plan. An owner or a group of owners of an apartment block, for example, can cooperate with a contractor to separate the concrete and steel of the destroyed house. The proceeds from the sale of the steel are used to pay the contractor while generating some money for construction for the owners. The municipality removes the concrete and recycles it in its own projects, such as resurfacing the battered streets and roads.

But what if the owners have not returned? The municipality hopes to get funding in the future , but for now, international support is only available for the reconstruction of public buildings and spaces. Squares are being renovated, administrative bodies housed and mosques and schools repaired.

Besides financial constraints, the main obstacle for the municipality is a lack of international recognition for Raqqa’s civil administration. Back in April 2017, during the early stages of the SDF’s advance, a civilian council was set up to run the city after IS’s defeat. The council is based on democratic confederalism, a system of autonomous administration whereby civilians oversee life in their neighbourhoods via communes, which work together to serve the interests of the city as a whole. Although the system is still a work in progress, it is founded on the idea of respecting people’s ethnic and religious backgrounds.

The SDF has its origins in the militant Kurdistan Workers’ Party (PKK) and the Kurdish wing of the Syrian People’s Protection Units (YPG), but it is not the case that ‘the Kurds’ have taken over Raqqa. The council includes Kurds, but its membership is mostly Arab. The same applies to the SDF, which was predominantly Kurdish after it was founded in 2015 but has increasingly attracted Arab members and also encompasses Christian militias.

As long as the council is not recognized internationally as a system that could be a blueprint for a more democratic and tolerant post-war Syria, there is no solid foundation upon which to rebuild the city, either physically or psychologically. Militarily, the situation also remains tense. In addition to Raqqa, the SDF controls parts of north and north-east Syria on the Turkish border. Turkey considers the SDF and YPG to be terrorist organizations, and by extension it rejects democratic confederalism, which is rooted in the ideology of the PKK, with which Turkey has a long-standing conflict. Turkey has threatened for years to invade the territory the SDF now controls. If it does, some of the SDF troops currently defending Raqqa will have to be deployed to the border area, once again leaving Raqqa vulnerable to IS attacks.

In the face of these ongoing insecurities, it will be difficult to convince people who have started over elsewhere to return home. Who would settle in a city where IS might strike again? Who would come back to the rubble of their previous lives with the lingering prospect of President Bashar al-Assad reinstating dictatorial power?

In the meantime, international recognition of Raqqa’s administrative system is nowhere in sight. The SDF was only recognized militarily because it offered the international coalition the best chance of defeating IS. With that objective largely achieved, the coalition powers have turned their attention elsewhere. What happens after the fighting ends seems to be nobody’s concern but the people’s themselves. 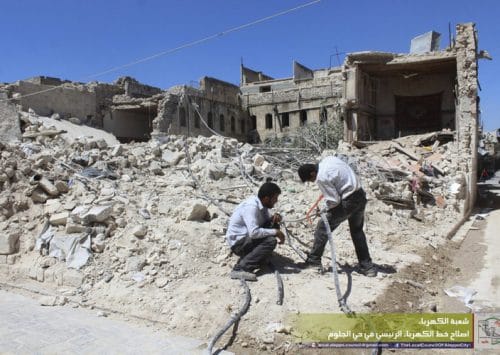