Fanack Home / Syria / History of Syria from Past to Present / Life in Syria: Broken Promises and Harsh Realities

Syria has been going through social, military and economic changes since the outbreak of war in the spring of 2011. In 2018, the regime, helped by its Russian and Iranian allies, regained control of large swathes of territory it had lost to rebel groups. The regime used every means to achieve such transformation, and they began to translate military change politically, economically, socially as well as through the media.

The military shift has resulted in plans related to the return of Syrian refugees from neighbouring countries and Europe, in addition to the return of internally displaced people to their homes. The question is, however, have these transformations been achieved? How has the regime dealt economically with the collapse of the Syrian pound and high inflation? Have refugees returned home? Have internally displaced people reclaimed their houses? Has life returned to normal, as the regime, its supporters and some European media outlets claim? What reconstruction projects have started, and how much did the regime allocate in its 2019 budget for these projects?

One billion dollars for reconstruction

According to the Syrian People’s Assembly, the government allocated $1 billion in the 2019 budget for the rehabilitation of public facilities, compensation for damage to private buildings, the return of displaced people to their homes and housing for those whose homes have been destroyed. This amount, according to Syrian economist Mustafa al-Sayed, is not even enough to remove the rubble from the eastern city of Deir ez-Zor. The most optimistic estimates put the cost of reconstruction at more than $400 billion. The worst hit cities are Aleppo, Deir ez-Zor, Raqqa and Homs as well as Hama, Idlib and Dara in Rif Dimashq. Some cities continue to struggle with the impact of military operations, most recently Aleppo, where the city council announced that more than 80,000 buildings in 36 neighbourhoods are at imminent risk of collapse .

In the face of the disastrous economic situation and the legacy of more than eight years of war, the question is whether Russia or Iran can reconstruct the country with the same efficiency as they helped destroy it. Can the agreements the government signed with Iran and Russia restore the economy? Monthly meetings are held between Russian and Iranian business representatives on the one hand and Syrian officials on the other, to link Syria’s reconstruction needs with the Iranian and Russian companies and organizations that can meet them, including projects to build power plants and connect Syrian chemical industries with Russian companies.

These moves are related to the political reality of the regime, which has to fulfil a number of conditions in return for giving companies associated with the United States the chance to carry out reconstruction projects in Syria. However, it is not possible to confirm this information, particularly in light of US sanctions endorsed recently by Congress under the Caesar Syria Civilian Protection Act. How is this impacting Syrians inside the country?

The military and political changes in Syria have not improved the value of the Syrian pound against the dollar, nor have they increased workers’ salaries.

This is well below the amount required to cover basic needs, if one looks at the most recent study conducted by the CBS on prices for 2016. During that year, prices rose by 679.63 per cent compared with 2010. Research carried out for this article showed that the cheapest rental properties in Jaramana, Rif Dimashq cost about $100 for a one-bedroom house per month.

In addition, unemployment stands at 42 per cent, according to the most recent census conducted by the CBS in 2016. The main reason for this high figure is the destruction sustained by private businesses and factories, according to the CBS.

The above has impacted food security, defined as having reliable access to a sufficient quantity of affordable, nutritious food . A survey conducted by the State Planning Authority in 2017 found that only 23.4 per cent of Syrians are food secure, 31 per cent are food insecure and 45.6 per cent are vulnerable to becoming food insecure.

According to Ihsan Amer, who led the survey, these figures do not indicate the true poverty rates in Syria because “a person may have food security but be poor at the same time, and some families receive one meal per day, others receive two meals and still others eat bread and tea only.”

The final straw appears to have been the gas crisis that emerged early in 2019, which saw even regime loyalists take to the streets to protest. In December, the price of a cylinder of gas was 12,000 Syrian pounds (23.30$) in Aleppo and 10,000 (19.424) in Tartus and Latakia; and 7,000 Syrian pounds (13.59$) in Damascus and Rif Dimashq, compared to the government rate of 2,500 Syrian pounds (4.84$). The crisis prompted the regime to sign contracts with private companies to procure gas from Lebanon.

The crisis is not only the outcome of the war, it has also been exacerbated by the lack of other fuels for heating. The crisis has also exposed the government’s inability to find a solution to a problem that recurs almost every year.

Where do Syrians stand?

Five million Syrians currently live outside Syria, and a similar number is internally displaced. Almost half of the working population is unemployed, and the remainder is facing poverty and starvation. About 300,000 people have died and about 250,000 are imprisoned or victims of forced disappearances. The army is fatigued and has fragmented into dozens of militias affiliated with various local, regional and international parties. ether official reconstruction programs are faced with threats of more sanctions and blockades on economic activities in the country. Formal negotiations between the two sides in the conflict have resulted in nothing but the formation of a committee to draft a new constitution, under a ceasefire that has not been observed.

Moreover, the regime continues to recruit thousands of Syrians and force scores of others to join the military reserve as part of preparations for a large-scale operation in Idlib, a governorate currently inhabited by more than 3 million people. Thousands of them will likely flee to Turkey, hundreds will be killed or injured and cities will be destroyed, extending the damage in an already devastated country where the regime has been unable to remove even the rubble in the Yarmouk refugee camp in southern Damascus. 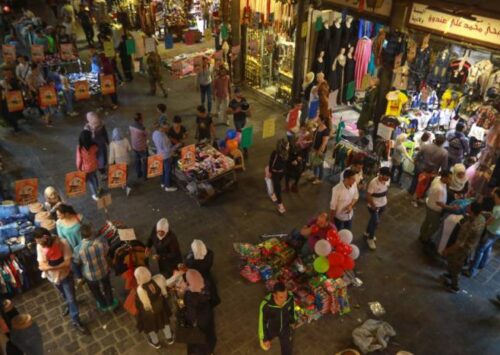