On 20 October 2015, US and Russian defence officials signed a memorandum of understanding (MOU) that outlines the steps their pilots should take to avoid inflight incidents in Syrian airspace, according to the Pentagon’s press secretary.

Aircraft safety for American and Russian pilots became an issue after Russia began bombing targets in Syria on 30 September during the 70th Session of the United Nations General Assembly, marking a new stage in foreign involvement in the Syrian war. Two days earlier, both US President Barack Obama and Russian President Vladimir Putin had addressed the assembly. Each emphasized the threats posed by so-called Islamic State (IS), which has established itself in Iraq and Syria, and the pressing need to defeat it, while agreeing on little else.

In the Syrian war, Russia and Iran are supporting Syrian President Bashar al-Assad, with fighters of Lebanese Hezbollah, Iraqi militias and Afghan Shiite fighters active on the ground. Meanwhile, Turkey, Saudi Arabia, Qatar and Western countries including the US, Britain and France are supporting various rebel groups with money, arms and advice. Although Russia says its increased involvement is intended to defeat IS terrorists, it is believed that dangerous loss of ground by regime forces is the real reason Moscow has stepped up its support.

The US has also repeatedly rejected Russian claims that it is targeting IS, saying that 90 per cent of Russian air strikes have been against non-IS targets, including US allies, hitting territory held by other rebel groups fighting the regime.

Following the signing of the MOU, State Department spokesman John Kirby told the press that the full text of the memo would not be released at Russia’s request, but that it included specific protocols for air crews to follow, plus the creation of a ground communications link between the two sides in the event of an air communication’s failure.

Kirby’s counterpart at the Pentagon, Peter Cook, added that the memo calls for aircraft to maintain a safe distance from each other. He declined to comment on whether the protocols specified what this distance was but confirmed that the agreement encompasses coalition aircraft. Coalition members include Saudi Arabia, Turkey and the United Arab Emirates, although virtually nothing has been reported on the actual participation of the Arab members since a Jordanian pilot was shot down on 24 December 2014 and subsequently burned alive by his IS captors.

Later, the Pentagon said that US-led coalition aircraft on a bombing sortie over Syria had been re-routed at least once to avoid a close encounter with Russian planes.

The US and Russia have been at odds over Syria since the civil war broke out there in 2011, with the US and its Turkish and Gulf allies backing different groups of Syrian rebels while Russia and Iran have steadfastly supported al-Assad’s regime. Russia’s intervention in Syria further complicates the already complex mosaic of the bloody conflict, bringing unintended clashes in the Syrian skies between the world’s two superpowers into the realm of possibility. “The fact that we have had to resort to a memorandum of understanding … gives you an indication of our concern about Russia’s activities but [also] our willingness to work with the Russians when itos in our own interest,” Cook said.

However, Washington’s policy on Syria remains confused. Since August 2011, the Obama administration has adhered to its statement that al-Assad has lost his legitimacy to rule, but has otherwise shown little coherence in its expressed or practiced policy towards Syria. On 19 October 2015, the State Department repeated that there was “no military solution to the conflict in Syria” and that only a political transition based on the so-called “Geneva 1” principles agreed with Russia and other parties on 30 June 2012 can benefit all Syrians.

Since these principles were agreed, the US has spent hundreds of millions of dollars on arms and programmes aimed at supporting different Syrian rebel groups. Most of these programmes have failed, including the $500 million “train and equip” campaign which was abandoned earlier this month.

Until it signed the MOU with Russia, the US response to Russia’s air strikes has been marked by indignation and condemnation. Various US officials, including Secretary of Defense Ashton Carter, have gone on record as saying that Putin’s efforts are “doomed to fail”.

Carter added that while the Pentagon was willing to hold talks with Russia over how to settle the Syrian conflict, “our position is clear, that a lasting defeat of ISIL [another name for IS] and extremism in Syria can only be achieved in parallel with a political transition in Syria,” effectively stressing the “importance of simultaneously pursuing these two objectives”. He insisted that Moscow’s bombing campaign in support of al-Assad will not alter the US-led coalition’s own military mission in the devastated nation.

The Obama administration has thus far stayed away from more direct involvement in the Syrian war, content to limit itself to bombing IS targets. This it has done since September 2014 without proving that the air campaign has either “defeated” or “degraded” IS, Obama’s stated goal at the outset.

In the meantime, Russia’s support of al-Assad seems to be yielding quick results, with regime forces able to recapture several key areas in western Syria and poised to retake more. 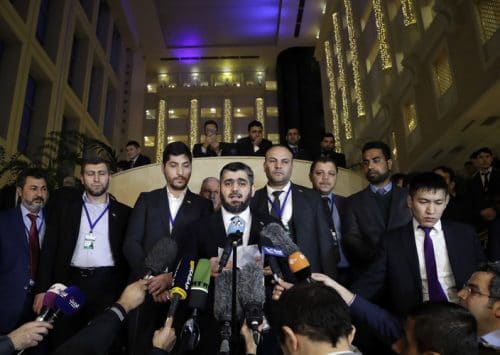 Russia Assumes Key Role in Syria Peace Talks
The meeting’s final statement paved the way for the Geneva talks in late February 2017, between the political oppositi...