Fanack Home / Syria / History of Syria from Past to Present / In Syria, New Decree could strip Refugees and Internally Displaced of Homes, Belongings

In Syria, New Decree could strip Refugees and Internally Displaced of Homes, Belongings

A decision by the Syrian state has alarmed many of the millions of Syrians displaced internally and outside the country about the fate of their homes and belongings, and led some to accuse the government of trying to bring about ‘demographic change’ through real estate law.

Decree No. 10, issued in early April 2018, allows the creation of ‘regulatory zones’ that could be redeveloped by the government. The decree gives property owners within those areas 30 days to prove their ownership or have a relative or representative do so, or face having their houses and businesses taken by the state.

The decree does not specify where the regulatory zones will be. However, given that a majority of those who fled their homes or the country do not have documents proving their ownership of their houses, and many are also wanted by the state for their involvement in opposition groups – armed and unarmed – or for fleeing military service, the law opens the door for the government to potentially seize the property of thousands if not millions of displaced Syrians.

The decree is not an entirely new concept. It follows on from Decree No. 66, a 2012 law that allowed for the redevelopment of two large zones in Damascus that had been largely occupied by working-class opposition supporters. The official reason for that law was to remove informally built and substandard housing and to replace it with modern developments that meet building codes. In January 2018, the parliament approved a bill that would allow for expansion of the law to other areas of Syria.

Critics have accused the government of using the new property laws as a means to raise funds while transferring property from individuals and groups aligned with the opposition to those loyal to the regime.

In an article for the Atlantic Council, Swiss-Syrian activist and academic Joseph Daher wrote, ‘Decree No. 66 and its national expansion can be used as an efficient instrument for rapid and large development projects that will benefit regime cronies, while at the same time operate as a mechanism for punishment against populations known for their opposition to the regime. They will most probably be replaced with higher social classes and new elites of war, who are generally less inclined to rise up against the regime.’

Syrian human rights lawyer Michel Shammas added that the ‘forced displacement’ of the inhabitants of many areas in Syria by regime forces ‘was planned carefully, with the aim of making demographic changes in the population structure in cities and areas that were destroyed’, and that the new laws relating to property rights were part of that plan.

If Decree No. 10 had been issued when Syria was in a state of peace and stability, it would not have been so problematic. ‘However, under the circumstances of Syria, the issuance of such legislation will result in the displacement of millions of people from their homes,’ he wrote.

Nahel al-Masree, another lawyer in Damascus, was less critical, saying the new laws could aid the reconstruction process. However, he also raised concerns about their application, including the confusion of reconciling the expanded Decree No. 66 with the new Decree No. 10 as well as the timing of the decisions and the difficulty of proving ownership for people who have fled the country.

Al-Masree argued that it is preferable for the government to organize reconstruction of the country as opposed to leaving it to the property owners as a private matter, ‘but on the condition of preserving the rights of all Syrian citizens without exception and the preservation of property protected by the constitution’, he wrote.

‘The only problem with the two [laws] is timing, where the protesters see that the time is still early and the crisis is not over yet … and because most of the people who will be affected by the areas are not present in Syria so that they can maintain their rights in the manner required by law.’

Many displaced Syrians will likely face potential issues with reclaiming their property – or what remains of it – upon their return, even without the new laws.

The Norwegian Refugee Council, which conducted a survey on the status of property documentation among Syrian refugees living in Lebanon, Jordan and Iraq in 2016, found ‘high levels of ownership assertions which are not matched by supporting documents for a variety of reasons, including loss during forced displacement and historical cultural practices regarding transfer of title within families’.

Furthermore, since the war began, registration of property transfers in non-government-controlled areas has been particularly difficult, and many buildings have been destroyed or occupied by squatters.

Opposition activists and others who had fled the country said their properties had been seized even without the legal justifications that would be provided by the new laws.

Ahmad Fouad Shmais, an opposition-aligned Damascene businessman and academic who fled to Egypt, said security forces broke into his house and seized it two years ago, along with the business offices below, without any legal grounds. Shmais said he had been unable to find out what happened to his family’s belongings that were in the home, including the contents of a large library containing many antique books.

Shmais predicted that Decree No. 10 will result in many more people losing their homes, particularly because “many people are wanted by the state and they will be seized immediately if they arrive in Damascus,” and because the bureaucratic hurdles of proving ownership from outside the country will be insurmountable for many.

“They took my house unlawfully, stole it,” Shmais told Fanack Chronicle. Decree No. 10, he said, “is a law of theft by the state from 12 million displaced people”. 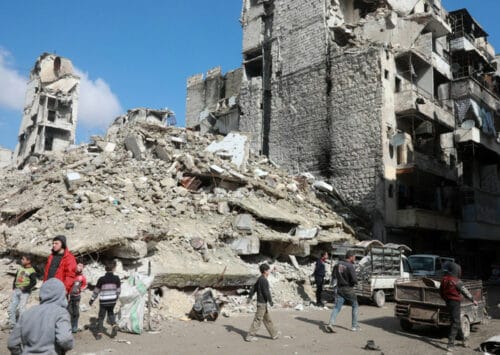 Life in Syria: Broken Promises and Harsh Realities
Five million Syrians currently live outside Syria, and a similar number is internally displaced. Almost half of the work...